The Billboard uses a special 90-degree angle display to create the illusion of depth, without any special glasses. 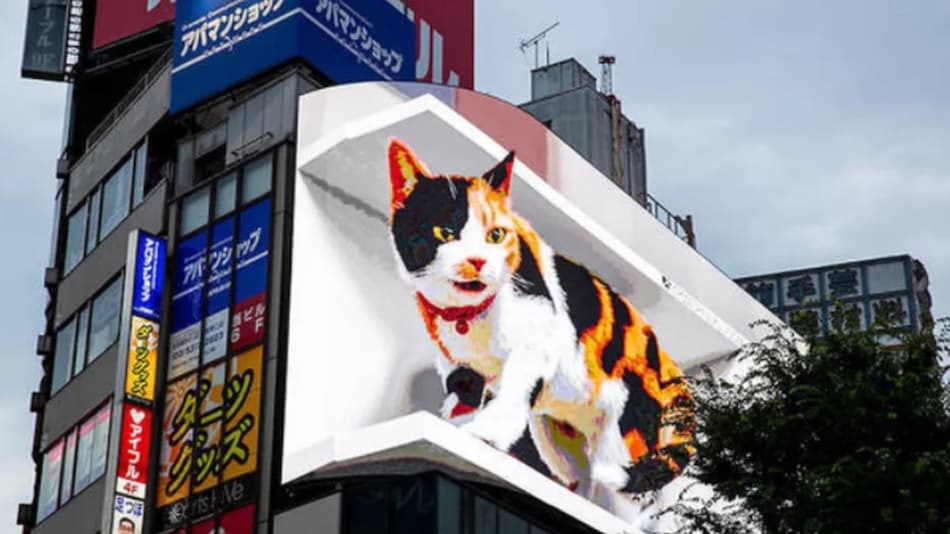 An enormous 3D calico cat has emerged on a giant-sized billboard in Tokyo, Japan. The special curved LED screen featuring the feline at one of the city's busiest railway stations in the Shinjuku district is 1,664-square-foot in size. Videos shared by users on Twitter show the cat walking, meowing or even taking a nap, depending on the hours of the day.

One Twitter user shared a video taken in the afternoon. The original tweet, which was in Japanese, when translated, reads, “This is a video taken locally around 3:30pm today. The crowd is unexpectedly noisy, so I have to adjust the volume of my voice. Be careful of the volume during playback!”

In the video, the cat takes a step forward, meows, and then appears to stand tall before taking the step back. It also gives an impression as though it's been tasked with watching over the city.

In a subsequent tweet, the user informed everyone that at the Cross Shinjuku Building, the rooftop will be signage, the ground floor will be an event space, and the basement will be a cafe.

On July 5, another Twitter user shared a video, which was shot at night.

“A cat in Shinjuku looks sleepy at night”, read the caption to the 14-second clip in which the feline rests her head on her paws, yawns, closes her eyes, and goes to sleep. The cat is so realistic that every movement in her body is based on a real one.

The company, which designed it, has also started live-streaming the billboard on YouTube. If you log in at the right time, then you'll be able to catch the cat in action, although it “sleeps” at night, during which time the billboard is empty for around six hours a day.

The video changes throughout the day. The display is scheduled to officially launch on July 12, and it's currently running test broadcasts.