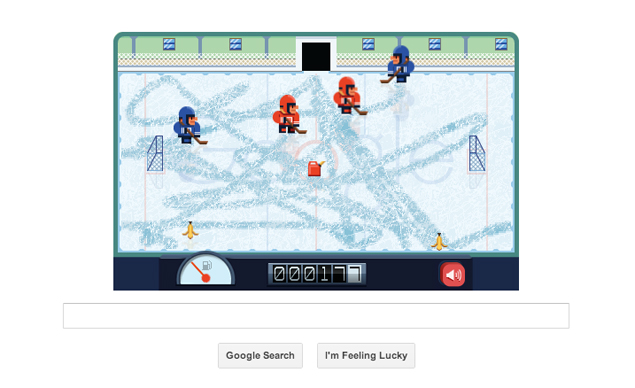 Google has marked Frank Zamboni's 112th birthday in a really "cool" (pun intended) interactive doodle that allows users to play a small game that involves driving the 'zamboni' to clean the ice rink.

Small kids are seen skating in the rink following which users need to clean up the ice marks accordingly. When the zamboni comes out, players can use the arrow keys to clean up the mess.

The game becomes challenging when more people come out on the rink leaving behind greater ice markings. The zamboni driver gets help in the form of extra fuel cans thrown in by the kids and extra points in the form of ice-cream cones. Players can also post high scores to their Google+ profiles.

So who is the man behind the Zamboni? Frank Joseph Zamboni, Jr. was an inventor born on January 16, 1901, in Eureka, Utah, a small town south of Salt Lake City. He was a US inventor with the ice resurfacer being one of his most recognised inventions. So much so, that his last name is registered as a trademark for these ice machines.

When Frank was a year old, his parents bought a farm in Lava Hot Springs, near Pocatello, Idaho, directly north of Salt Lake City. It was there in the high mountain country that he developed a lifelong skill for working with mechanical equipment.

At the age of 15, he was pulled out of the ninth grade to help his father on the family farm while he also worked as a mechanic in a local garage. After his parents sold the farm in 1920, they moved with Frank and his siblings to Los Angeles, California, where Frank and his younger brother, Lawrence Eugene, started working in their elder brother, George's automobile garage.

After saving enough money, a year later Frank went to the Coyne Trade School in Chicago to learn the electric business. When he returned in 1922, Frank and Lawrence went into business and started the Service Electric Company, later known as the Zamboni Bros. company.

Two years later Frank married Norda Ileta Chamberlain and three children. Soon, he was approached by the New Way Electric Co. of Los Angeles to come up with a solution for the  firm. In 1924 Frank invented an adjustable electrical resister and obtained a US patent for it.

In 1927, the two brothers had built an ice making plant from where they sold block ice on wholesale to local fruit and vegetable packing plants. With the advent of better air conditioning and refrigeration equipment, both brothers hit a saturation point in their business.

In January 1940, with their cousin Peter Zamboni, the brothers opened Iceland as one of the largest ice rinks in the country with 20,000 square feet of skating surface.  Approximately 150,000 skaters used the rink yearly. Frank was perplexed with a huge problem faced with cleaning the rink that took three experienced men and one and a half hours each day. Frank decided to come with a solution.

Several unsuccessful models later, during the late summer of 1948, one of his models was perfected to reduce the manpower to 1 and the time to a mere 10 minutes. On May 16 1949, he applied for a U.S. patent. Later in the year, he established Frank J. Zamboni & Co. as a family partnership to manufacture his machine starting with an improved model.

Over the next 15 years, Zamboni obtained four more U.S. patents which he assigned to his company and since then there was no looking back. Till date, the family business continues.