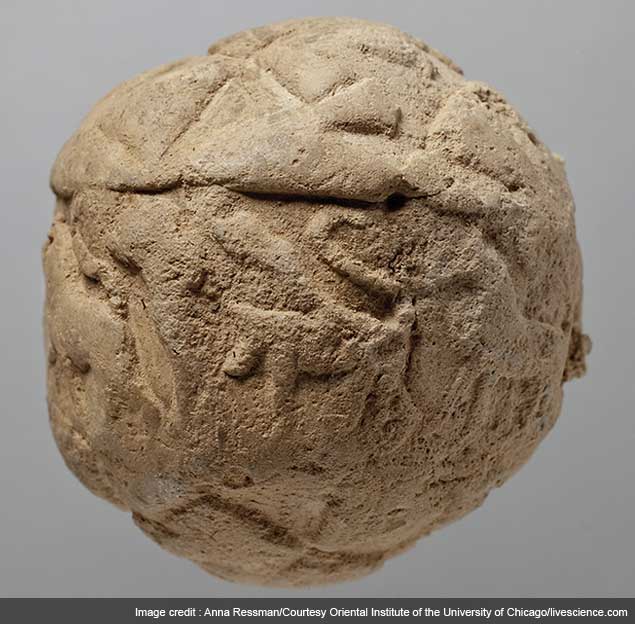 The clay balls, often called "envelopes", excavated in the 1960s, were made about 200 years before writing was invented.

The balls were sealed and contain tokens in a variety of geometric shapes, varying from golf ball-size to baseball-size.

Researchers used high-resolution CT scans and 3D modelling to look inside more than 20 examples that were excavated at the site of Choga Mish, in western Iran, in the late 1960s, 'LiveScience' reported.

The clay balls were created about 5,500 years ago at a time when early cities were flourishing in Mesopotamia.

The clay balls may represent the world's "very first data storage system," said Christopher Woods, a professor at the University of Chicago's Oriental Institute, in a lecture at Toronto's Royal Ontario Museum.

Researchers have long believed these clay balls were used to record economic transactions.

That interpretation is based on an analysis of a 3,300-year-old clay ball found at a site in Mesopotamia named Nuzi that had 49 pebbles and a cuneiform text containing a contract commanding a shepherd to care for 49 sheep and goats.

But, how these devices would have worked in prehistoric times, before the invention of writing, remains a mystery.

How people recorded the number and type of a commodity being exchanged without the help of writing is also not known.

Researchers have found that the tokens within the balls are in 14 different shapes, including spheres, pyramids, ovoids, lenses and cones, the report said.

These shapes, instead of representing the whole words, would have conveyed numbers connected to a variety of metrological systems used in counting different types of commodities, Woods said.

For instance, one ovoid could mean a certain unit, say 10, which was used while counting a certain type of commodity.