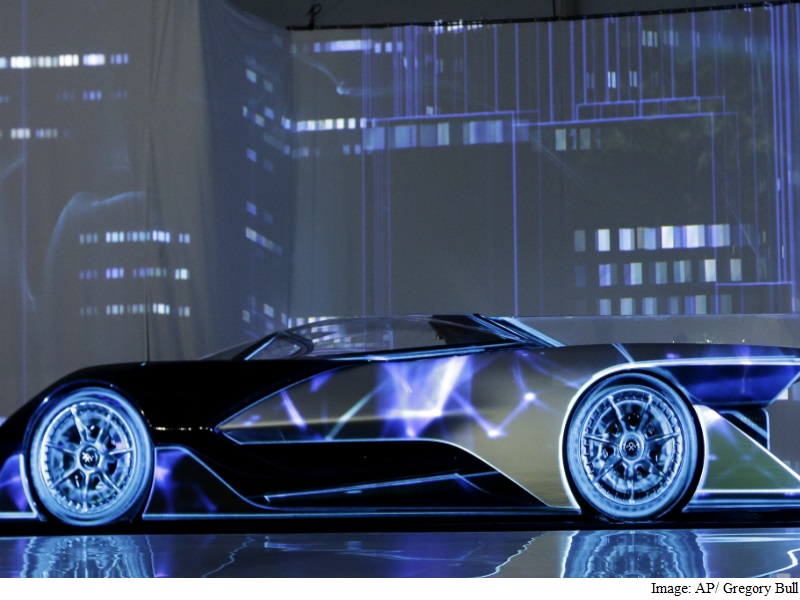 The automotive future according to a new electric car maker looks an awful lot like a Corvette crossed with the Batmobile.

California-based Faraday Futures debuted its sleek electric concept racecar Monday night during the annual CES show that focuses on consumer gadgets and has increasingly become a way for carmakers to show off their latest technological feats.

The 18-month-old company that has remained much of a mystery until recently revealing its primary backer, Chinese billionaire Jia Yueting, won $335 million (roughly Rs. 2,226 crores) worth of incentives from the state of Nevada last month to build a $1 billion (roughly Rs. 6,645 crores) manufacturing facility in a hard-hit Las Vegas suburb.

Not even Nevada Gov. Brian Sandoval, who pushed for the incentive package and attended Monday's debut, had seen the concept car. Neither had North Las Vegas Mayor John Lee although he visited the California headquarters four months ago and saw "the intelligence building around the car."

"There was no doubt about it that that was the exclamation point," he said, referring to the negotiations to land the manufacturing plant in his city. He was convinced, he said.

Emphasizing the speed at which it will develop and build cars, the company's Senior Vice President of Research and Development Nick Sampson said the company would deliver its first production car in a couple of years.

Sampson said Faraday had so far hired 750 people globally with most at its California headquarters and planned to break ground on its North Las Vegas plant in a few weeks with plans to hire 4,500 people there.

He said his company would utilize digital design and testing of parts and modular construction, making it quicker than competitors.

"You don't need to have a hundred year legacy in the automotive industry to define what the next generation of transportation needs to look and feel like," Sampson said, taking a stab at traditional car makers and likening the future of cars to the debut of the Apple iPhone nine years ago making several models of cell phones obsolete.

But Sampson wasn't saying what the company would build first for production, how much it's spent so far and also wasn't revealing much more information about the company's investors. The company is still shopping for a battery supplier, he said.

The presentation included Ding Lei, co-founder of Letv described as the Netflix of China, who said afterward that his company intends to partner with Faraday on research and development.

The road to make a profitable electric car company hasn't been easy for one of the most well-known in the marketplace. Tesla has only made a quarterly profit once since its 2003 founding.

And traditional automakers have been utilizing modular design and augmented reality in development for years.

Sampson said the difference is that Faraday will be designing only electric cars unlike other car-makers that might have to spend more time redesigning a model to fit a hybrid engine, V6 or V8.

The company dubbed Monday's debut that included a clear fin running half the length of the car, a single-line of a smile for a headlight and a white interior with a seat inspired by Nasa design the FFZero1.

The low-profile waist-high car remained under a white sheet, the centerpiece on a white stage in front of white curtains for most of Monday's night's presentation inside a large tent packed with people and press waiting for the reveal.

"It's an extreme tablet on wheels," said Richard Kim, Faraday's head of global design, saying the concept included the ability to project images on the road much like a "digital copilot," a smart phone dock in the steering wheel, tunnels below the car to funnel air through and a designed horizontal crease along the sides of the car he called the "UFO" line to signal the car was otherworldly.

It's a "car of concepts," he said rather than a concept car.