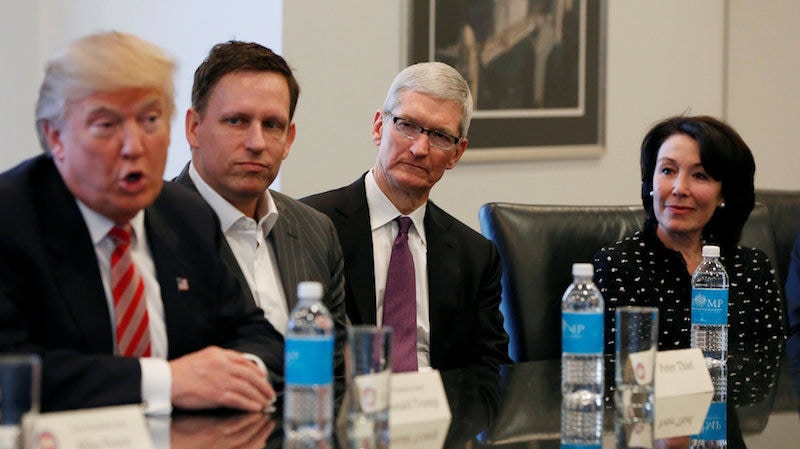 Scores of technology firms including Amazon, Facebook, Google and Microsoft on Wednesday joined in a legal filing urging a judge to toss out President Donald Trump's latest travel ban.

More than 160 companies, all but a couple of which are in the technology sector, signed a "friend of the court" brief siding with opponents of Trump's executive order in a US appeals court for the District of Maryland.

Federal judges have halted Trump's revised executive order issued in March to temporarily close US borders to refugees and nationals from six Muslim-majority countries, dealing the president a humiliating defeat.

The rulings triggered a nationwide freeze on enforcement of a ban on entry by nationals of Iran, Libya, Somalia, Sudan, Syria and Yemen for 90 days.

A US judge ruled that the state of Hawaii, in its legal challenge, had established a strong likelihood that the ban would cause "irreparable injury" were it to go ahead.

In Maryland, US District Judge Theodore Chuang issued a similar nationwide injunction on a separate complaint filed by advocacy groups claiming that the amended order discriminates against Muslims.

In the "amicus brief" filed Wednesday, companies backed the argument that Trump's ban not only discriminated on the basis of religion, it also overstepped the authority of the president to change rules regarding who is allowed into this country.

"The second order effects a fundamental shift in the rules governing entry into the United States, and is inflicting substantial harm on US companies, their employees, and the entire US economy," lawyers argued in a copy of the brief available online.

The ban makes it more difficult to attract talented employees, increases costs; makes it tougher to compete, and makes it more appealing for global enterprises to invest in operations in more immigrant-friendly countries, according to the brief.

Trump has said a travel ban is needed to preserve US national security and keep out extremists.

His first effort, in January, banned travelers from seven majority-Muslim countries and all refugees but was blocked by a court in Washington state on the grounds that it violated the constitution's prohibition of religious discrimination.

That block was upheld on appeal, and the administration said it would revise the ban to better adhere to the law.

Chuang ruled that plaintiffs opposing the second ban in his court "are likely to prevail on the merits, that they are likely to suffer irreparable harm in the absence of injunctive relief and that the balance of the equities and the public interest favor an injunction."

Trump vowed to fight the "flawed" ruling all the way to the Supreme Court if necessary, describing it as "unprecedented judicial overreach."

The Life of an Apple Supplier Is Getting Even Tougher
Government Working on Data Protection Law, Says IT Secretary