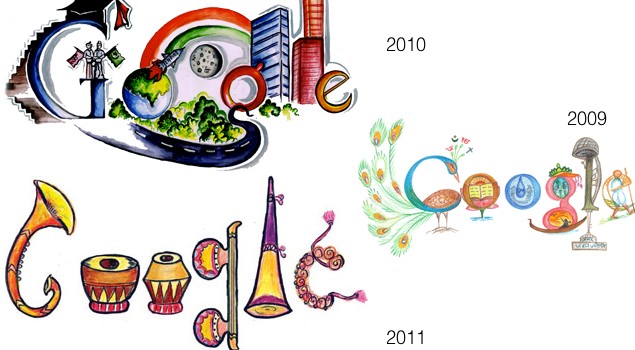 Doodle 4 Google is an annual competition conducted by Google India. It was launched in 2009 and is open to students from classes 1 to 10, who are invited to design the Google Doodle to celebrate Children's Day in the country.

As always, this year the search giant invited children between the ages of 5 to 16 years to participate in the Doodle 4 Google competition for 2012 with the theme of 'Unity in Diversity'. The contest was extended to over 40 cities in the country and the winning doodle was announced at an event in New Delhi earlier this month. It is this winning doodle by Arun Kumar Yadav, a class 9 student of Kendriya Vidyalaya from Chandigarh, that is featured on Wednesday's Google India home page.

The winning Doodle titled 'India - A Prism if Multiplicity' is live on the Google (India) homepage Wednesday, National Children's Day and reflects the artistic merit, creativity, and expression of the theme. The Doodle will also be featured on a special colour pack and drawing book by Classmate. In all, 14 doodles were shortlisted and all finalists will receive a Google Goodie bag and a Samsung tablet.

Doodle 4 Google 2012 is the fourth edition of the competition in India. The first edition, held in 2009, was won by Puru Pratap Singh, a fourth standard student from Gurgaon. The 2010 competition was won by Akshay Raj, a class IX student of St Aloysius High School, Mangalore, while last year's winner was Varsha Gupta from Ryan International School, Greater Noida.