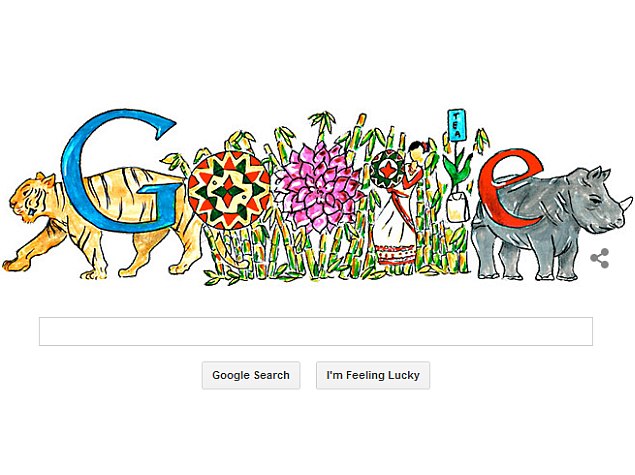 Doodle 4 Google - India contest's winning entry, submitted by Pune schoolgirl Vaidehi Reddy, has been featured by Google on its homepage on Friday, November 14, which is treated as Children's Day in India - the birth anniversary of India's first Prime Minister, Jawaharlal Nehru.

Friday's doodle on Children's Day is the winner of the sixth annual Doodle 4 Google - India contest, and is titled 'Natural and Cultural Paradise - Assam'. The theme of this year's Doodle 4 Google - India contest was 'A place in India I wish to visit', and Google on Wednesday had announced it had received over 1 million entries from more than 1,700 schools across 50 cities in India.

The Doodle 4 Google - India competition was launched back in 2009 and is open to students from class 1 to 10, who are invited to design the Google doodle to celebrate Children's Day in the country.

Vaidehi Reddy, the winner of the sixth Doodle 4 Google - India contest, is from Army Public School, Pune. The doodle features objects representational of Assam, with the Royal Bengal Tiger behind the first 'G', a traditional 'dhol' drum as the first 'O'; the second 'O' strangely enough what appears to be a dahlia flower - which is not the official state flower (foxtail orchids) of Assam; and a woman in a traditional 'mekhela chador' dress playing the 'dhol' representing the second 'G'; a tea plant representing the 'L', and finally, an Indian rhinoceros (Rhinoceros unicornis) behind the 'E'.

Commenting on the Doodle 4 Google - India contest, Rajan Anandan, Vice President and Managing Director, Google India, on Wednesday said, "Doodle 4 Google - India is the perfect platform for the youth of India to showcase their talent on an international platform. It allows youngsters from not only the metros but from Tier II, III and even IV cities to participate, which is evident from the entries seen this year. The response of over 1 million entries is indeed overwhelming and the talent which has surfaced through the entries is remarkable."