Doctor Who doodle may be Google's best yet 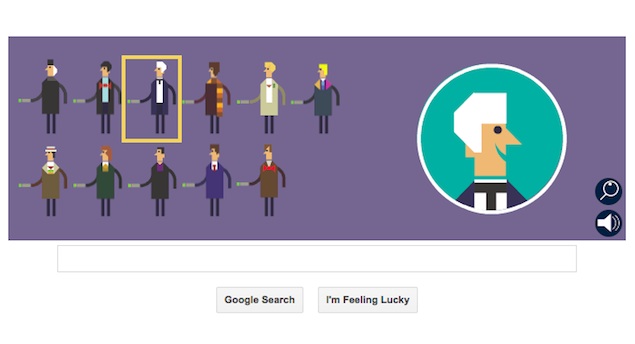 Popular British science fiction TV show, Doctor Who, is the subject of Saturday's Google doodle. The 50th anniversary of the  show has been marked with an interactive 8-bit graphics game.

The game can be started by clicking the Play button and starts with Dalek (fictional extraterrestrial mutant) taking away the  letters in the Google logo. You can then choose among the eleven  incarnations of the Doctor and begin the quest to retrieve each alphabet across different levels set in different settings. You need to return the letters to the TARDIS, while escaping from Dalek. The Doctor needs to be guided by the mouse pointer in a 2D world. If you run into Dalek you'll transform into the next incarnation of the Doctor. The levels are timed and at the end of the game you can track how long it took you to complete the game.

It's one of the biggest Google doodle to have been ever produced with a team of five working on the game dedicated to the show, for four months, as reported by The Guardian. The effort has been led by Matthew Cruickshank, a British animation expert who works at Google as a doodler. The doodle is known internally as the "Whodle," suggesting the large effort involved in its creation.

According to the report, around 4,000 Doctor Who fans signed a petition at Change.org to asking Google to make a doodle coinciding with the 50th anniversary of the show on 23 November 2013.

For the uninitiated, Doctor Who is science-fiction television series produced by the BBC. The series essentially revolves around the adventures of a time-travelling humanoid alien who is referred to as the Doctor.

The Doctor travels through the universe in his TARDIS (Time and Relative Dimension in Space) craft, a time-travelling spaceship that looks like a blue British police box. The Doctor helps people and works for good causes, while fighting enemies.

The show first aired on BBC on 23 November 1963 and continued till 6th December 1989 across 26 seasons. It was revived in 2005 and still airs on British television. A Doctor Who television film was also produced in 1996.