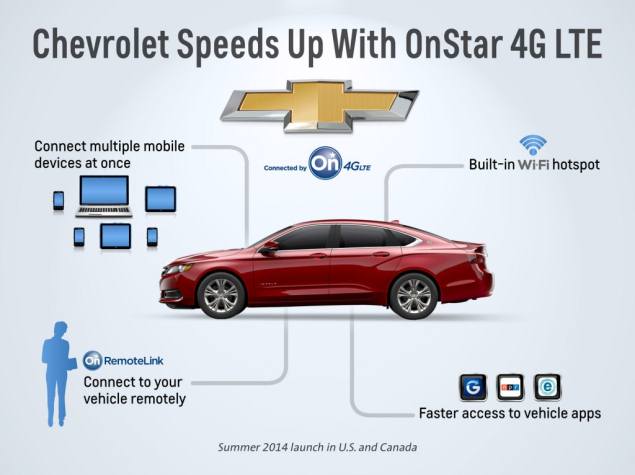 The new Chevrolets coming out this year will be faster -- on the information superhighway.

The General Motors division said Sunday it would deploy fourth generation (4G) Internet connections on several models to help motorists who want to stay connected with the growing number of apps for automobiles.

Chevy will allow the 4G connections with Long Term Evolution (LTE) in a partnership with AT&T.

"Chevrolet is expected to implement the broadest deployment of 4G LTE in the automotive industry," said Alan Batey, senior vice president of Global Chevrolet, who added that the move "is indicative of our broad commitment to deliver more value and convenience through smart technology applications."

The high-speed connections will allow for a Wi-Fi hotspot that allows passengers in a vehicle to use tablets or other devices, or to watch videos via the Internet in vehicles which have screens.

The 4G cars will for now only be sold in the United States and Canada, according to the Chevrolet announcement at the Consumer Electronics Show in Las Vegas.

"This technology is not just for the rich and famous," Batey said at a news conference.

"You're going to be connected everywhere."

Initially 10 vehicle models will get the 4G connections by mid-2014 but more will be added, he said.

The auto sector's presence is growing at CES with a large number of carmakers and related technology firms showing their wares at the huge electronics expo opening Tuesday.

The service links with GM's OnStar service to apps and services that require a high speed cellular or data connection. Current AT&T customers will be able to add their vehicle to a shared data plan or purchase a standalone option.

Nvidia GameStream-Ready PCs and Wi-Fi routers revealed ahead of CES 2014
Sony Windows Phone 8-based smartphones in the works: Report