Bill Gates tops list of most admired people in the world: Poll 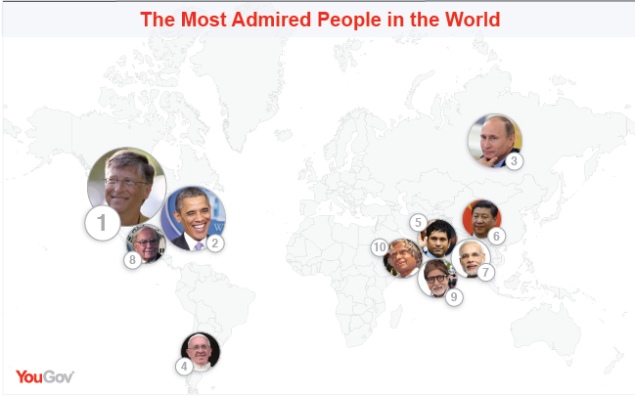 Microsoft founder Bill Gates has been named the most admired person on the planet with cricketing legend Sachin Tendulkar fifth on a list of 30 people, compiled after a poll in 13 countries, including India.

The 'most admired people in the world' poll was conducted by YouGov for The Times, by surveying almost 14,000 people in Great Britain, France, Germany, Russia, the US, Australia, Pakistan, Indonesia, India, China, Egypt, Nigeria and Brazil.

There were four Indians in the top ten and seven overall in the list of 30 most-admired people.

Surprisingly, there were just six women on the list of most admired people with Queen highest ranked among them. Other women to make it to the list was Oprah Winfrey (20th), Angela Merkel (26th), Hillary Clinton (27th) and Chinese contemporary folk singer Peng Liyuan (28th).

Sportsmen featured highly in the affections of many across the world. After Tendulkar it was Argentina footballer Lionel Messi who was 15th followed by US basketball player Michael Jordan (21) and Portuguese footballer Cristiano Ronaldo (22).

Pakistani cricketer-turned politician Imran Khan was 12th on the list.

Separate lists of the poll in different countries was also given by YouGov.

In the poll in India, as expected, Tendulkar topped the list but interestingly it was Obama who came in second followed by Modi, Gates and Bachchan.