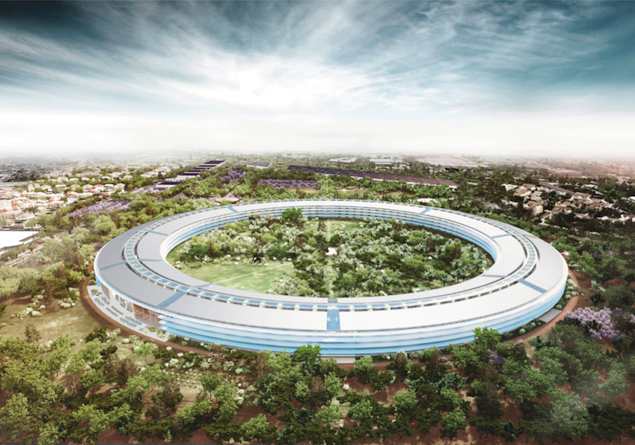 Apple's plan to build a shimmering flying-saucer shaped headquarters got final clearance for take-off late Tuesday, after a tax break granted the technology titan was trimmed.

Officials in the Silicon Valley city of Cupertino, which has long been home to the culture-changing technology titan, put a stamp of approval on a grand vision put in motion years ago by late Apple co-founder Steve Jobs.

The vote late Tuesday was a procedural formality and essentially a rubber stamping of a unanimous endorsement for the project by members of the Cupertino city council last month.

Final approval of Apple's new campus came with an agreement to trim by 15 percent a tax break awarded to the company in 1997 when the future of the then-struggling company was uncertain.

In documents filed with the city, "Apple Campus 2" is described as a 21st Century creation designed for research, collaboration, and innovation.

"This new development will provide a serene environment reflecting Apple's brand values of innovation, ease of use and beauty," Apple said in paperwork filed for approval by the city.

The majority of space will be greenery, but the eye-catching jewel of the campus promised to be a glimmering ring of polished metal and glass, mirroring the design passion put into Apple's coveted devices.

"The entire campus, indoors and out, is intended to promote shared creativity and collaboration, and spur invention of the next several generations of Apple products," the company said in plan paperwork.

The four-story main building will have about 2.8 million square feet of space and will be able to accommodate 12,000 employees, according to design specifications.

The list of campus amenities included a "striking restaurant" and a separate fitness center with about 100,000 square feet of space.

Apple said that it will continue to use the One Infinite Loop campus a short distance away, which is its current headquarters.

"The main objective of the project is to redevelop the site with a new, unified, secure and private Apple campus," the company said, in the plan filed with the city.

Apple has a powerful presence in Cupertino, a city with a population of about 58,000 people located located near the Santa Cruz Mountains about 42 miles south of San Francisco.