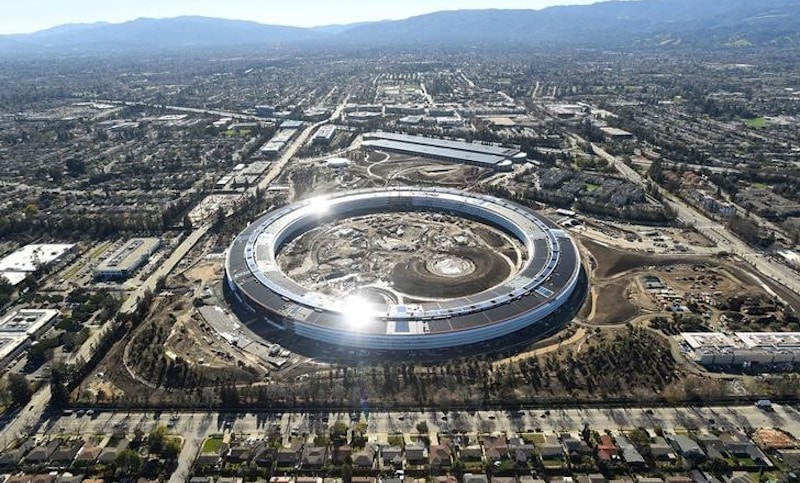 Apple on Wednesday announced that workers will start boarding its futuristic new "spaceship" campus in Silicon Valley in April, fulfilling a vision set out by late founder Steve Jobs.

The process of moving more than 12,000 people to a new campus that Jobs envisioned as a "center for creativity and collaboration" was expected to continue late into the year.

A theater on the new Apple Park campus was named in honor of Jobs, who would have turned 62 on February 24.

"Steve's vision for Apple stretched far beyond his time with us," chief executive Tim Cook said in a release.

"He intended Apple Park to be the home of innovation for generations to come."

The 175-acre campus with a ring-shaped main building clad in giant panels of curved glass blends workspaces and parkland, and is powered entirely by renewable energy, according to Cook.

Campus features include a fitness center, foot paths, research labs, a visitors center, and an orchard.

"We have approached the design, engineering and making of our new campus with the same enthusiasm and design principles that characterize our products," said Apple chief design officer Jony Ive.

Apple last month reported a rebound in iPhone sales that lifted the tech giant to record revenue in the past quarter, easing concerns of slowing growth.

Apple said that it sold 78.3 million iPhones - the most ever in a quarter - up five percent from the same prime holiday shopping period the prior year.

The sales made Apple the world's top smartphone vender in the final three months of last year, overtaking Samsung, according to industry tracker Strategy Analytics.

Jobs, the late tech-savvy marketing genius, and Steve Wozniak, who invented the Apple computer, formed what would become the world's largest corporation with eye-popping annual profits.

The two college dropouts created the company that has changed the way people use computers, listen to music, communicate on the go, and made people at home in a world of "apps" tailored for work, play, education, health and more.

Apple's hit products - the Mac, the iPod, the iPhone and the iPad - command a cult-like following, long after the company's humble beginning in Jobs' Cupertino, California garage on April 1, 1976.

The new campus is in Cupertino as well, with the Jobs Theater on a hill-top overlooking meadows and the main building.

"Steve (Jobs) was exhilarated, and inspired, by the California landscape, by its light and its expansiveness," his widow Laurene Powell Jobs said in the release.

"It was his favorite setting for thought. Apple Park captures his spirit uncannily well."