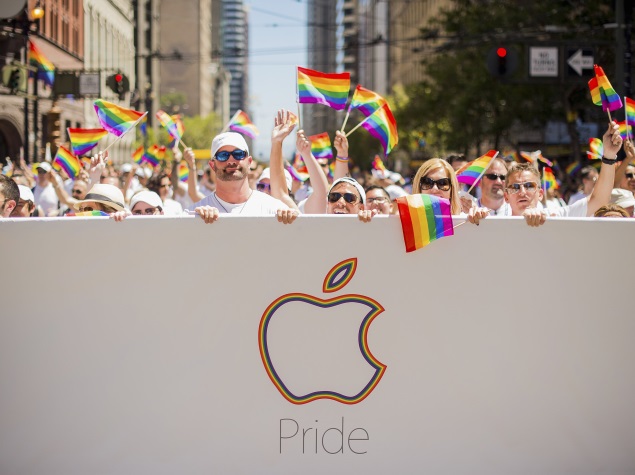 Apple Inc, Facebook Inc and other prominent Silicon Valley technology companies flew the flag for gay rights at the San Francisco Pride Festival on Sunday as they sought to boost morale among employees and reflect a corporate culture of diversity.

Thousands of Apple employees donned specially designed T shirts at the festival and marched in unison. This year's turnout was largest in the company's history, several Apple employees told Reuters.

The San Francisco event was one of many Gay Pride parades held across the United States on Sunday.

Apple Chief Executive Tim Cook made a surprise appearance at the San Francisco event to greet employees and their families early in the morning, but did not march in the parade himself.

Apple has a long history of supporting the lesbian, gay, bisexual and transgender (LGBT) community. The company recently came out against an Arizona bill that would permit businesses to refuse service on religious grounds, a measure that critics said could allow discrimination against gay people.

In an unusual step for the sometimes secretive Apple, the company has spoken out about its support for the Pride festival.

To help attendees navigate the packed event, the company set up a dedicated LGBT station on iTunes Radio and featured several apps on its App Store, including the Find My Friends app. Company employees also handed out iTunes gift cards to bystanders.

"Apple believes equality and diversity make us stronger, and we're proud to support our employees and their friends and families in this weekend's celebration," Apple spokeswoman Michaela Wilkinson said.

"It's a dog whistle to their consumer base that these tech firms are cool, with it, and progressive," said Fred Sainz, vice president of communications and marketing at the Human Rights Campaign. The HRC awarded Apple a perfect score on its corporate equality index, which rates American workplaces on LGBT equality.

Ellen Leanse, a former Google and Apple senior employee, said the Pride festival is a "high-visibility place" for these tech firms to compete for talent.

"Tech companies need to be at Pride simply to be in the game," she said.

The increasing visibility of tech firms at the parade comes as U.S. courts debate same-sex marriage bans. On Wednesday, a Denver federal appeals court ruled that gay couples in Utah have a constitutional right to marry.