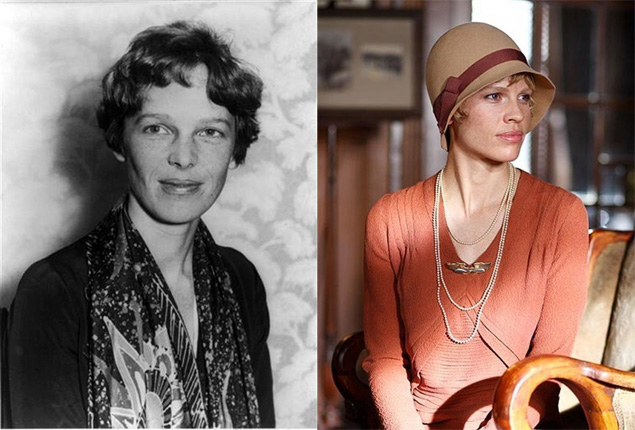 Amelia Earhart's life inspired renowned filmmaker Mira Nair to make a movie on the legendary female aviatrix who disappeared over the Pacific Ocean in 1937.

Hilary Swank took the lead as Amelia Earhart along side Richard Gere donning the role of her husband, George Putnam. The plot begins with Amelia (Hilary) being offered an opportunity to become the first woman of her time to cross the Atlantic, by publishing businessman and later husbandGeorge Putnam (Gere).

After the flight's success, she rises to fame upon her return to the US. Putnam then volunteers to guide Earhart on writing a booksharing her experience. In the meanwhile, she makes use of her celebrity status to endorse products and make public appearances to fund her flying. George's persistent efforts to marry her finally pay off when she agrees.

Post their marriage, Amelia feels the need to set higher records and in 1932 she becomes the first woman pilot to fly solo across the Atlantic. During this course, she falls into a love affair with aeronauticsinstructor Gene Vidal (Ewan McGregor). Putnam confronts Amelia regarding her affair while Amelia argues that she doesn't want to be a public figure anymore.

Both sort out their differences and she is drawn back to Putnam on the eve of her world flight. But in vain. She does not have enough fuel to get back. Her final message isn't clear enough for the Coast Guards operators to pick up on the radio and contact is lost. The movie ends with Earhart and her navigator continuing to fly on.

The film has garnered more negative reviews from audiences and critics alike, which say that the movie failed to capture the essence of Amelia as an extraordinary woman. It focused more on the dramatic angle than the actual Amelia as a person.

Manohla Dargis of the The New York Times wrote, "The actors don't make a persuasive fit, despite all their long stares and infernal smiling. ...the movie is a more effective testament to the triumphs of American dentistry than to Earhart or aviation." Rotten tomatoes gave the film a 21% rating and a rather average score of 4.4/10.

The movie did attract some positivity including the likes of Ray Bennett of the Hollywood Reporter who characterized the film as an "instant bio classic," stating that the production values in which "director Nair and star Swank make her quest not only understandable but truly impressive."

Check out the official trailer of Amelia.