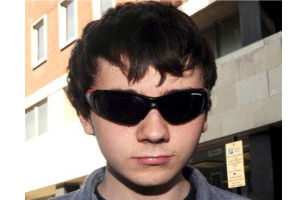 Highlights
A teenager accused of acting as a spokesman for computer hacking groups that targeted Sony, Rupert Murdoch-owned newspapers and a British crime agency was freed on bail Monday as he awaits trial.

Jake Davis, who was arrested last week at home on Scotland's remote Shetland Islands by the police e-crime unit, is accused of mounting a cyberattack on Britain's Serious Organized Crime Agency and other offenses linked to the Luz Security and Anonymous hacking collectives.

The charge relates to a distributed denial of service attack, in which websites are flooded with traffic to make them crash.

Prosecutor Rav Chodha said Davis, 18, also was involved in an attack against Sony Corp. in which customers' bank details were accessed, and attacks on a website of Britain's National Health Service and sites belonging to the Murdoch-owned Sun and Times newspapers.

Davis used the online nickname Topiary and acted as a spokesman for the two hacker groups, police said.

During the appearance at London's City of Westminster Magistrates' Court. Davis spoke only to confirm his name and personal details. Judge Howard Riddle ordered him released on bail until a court appearance Aug. 30.

He is not allowed to use the Internet and must wear an electronic tag, observe an overnight curfew and live at his mother's home in central England.

LulzSec shot to prominence in May with attacks on U.S. broadcaster PBS, whose website it defaced by posting a bogus story claiming that the late rapper Tupac Shakur had been discovered alive in New Zealand.

The group is a spin-off of Anonymous, an amorphous collection of Internet enthusiasts, pranksters and activists whose targets have included the Church of Scientology, the music industry, and financial companies such as Visa and MasterCard.

Davis' arrest is one of a spate by law enforcement agencies in Europe and the United States trying to put a stop to Anonymous and its offshoots.

Last month the FBI, British and Dutch officials carried out 21 arrests, many of them related to the group's attacks on Internet payment provider PayPal Inc., which has been targeted over its refusal to process donations to WikiLeaks.