Shahid Balwa: I am being singled out 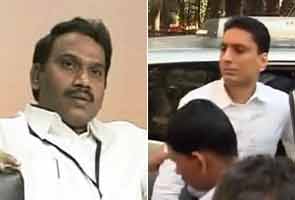 Highlights
A Mumbai court has granted two-day transit remand of DB Realty promoter Shahid Balwa to the Central Bureau of Investigation (CBI) in connection with the 2G spectrum scam. (Read: Who is Shahid Balwa?)

Balwa cried foul in court over being singled out. He contended that several other companies which were richer than his company, DB Realty, were granted licenses.

Balwa was arrested from his house in Mumbai on Tuesday in connection with the 2G spectrum scam. He was produced in a Mumbai court today and will now be brought to Delhi. (Shahid Balwa arrested in 2G scam case)

The CBI is hoping that by confronting Raja with Balwa, it would be able to establish his link to the money trail in the scam. The CBI reportedly has evidence from the Income Tax department that Balwa, considered close to Raja, was instrumental in channeling the kickbacks allegedly received by the former Telecom Minister from the sale of 2G spectrum.

Raja was arrested eight days ago by the CBI in connection with the 2G scam which he is alleged to have masterminded. In court on Tuesday, the CBI asked for four more days to question Raja. The judge agreed to two more days of custody for the former Telecom Minister.

The CBI says that in 2008, when the government was allocating 2G spectrum for mobile phone networks, Raja twisted the rules to benefit a few companies - especially Swan and Unitech.

The licenses for 2G spectrum were not auctioned as many say they should have been. Raja chose to follow a first-come-first-served policy which was set by his predecessors. But the CBI's case is based on his office advancing the deadline for payments and informing only some of the players. Companies like Swan and Unitech seemed to have been tipped off to this, because despite the cut-off date being brought forward, they had their payments ready.

After winning their licenses, Swan and Unitech sold equity to foreign companies much before they began the rollout of their services. The giant profits they made seemed to underscore the point that spectrum had been sold far too cheaply by the government.

According to sources, over Rs 200 crore was allegedly transferred by DB group to Kalaignar TV, owned by the DMK family. But speaking to NDTV, DB Realty denied giving any loan to it directly. The CBI is probing this allegation.

Together, these two players cost the government Rs 7,195 crore, according to the CBI. Both Swan and Unitech have denied these allegations.