There May Soon Be a Self-Driving Vehicle on the Road, and It's Made in India 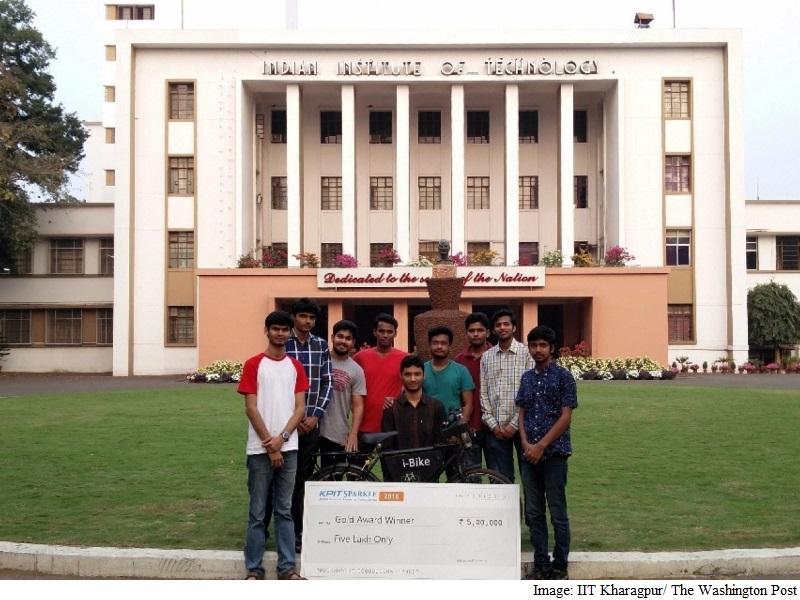 There may soon be another self-driving vehicle on the road, and it's not a car.

A team of engineering students in India have come up with a driverless bicycle. Developed at the Indian Institute of Technology Kharagpur, the bike, called i-Bike, was designed with disabled riders in mind. But the bike's hybrid configuration, which can easily switch from autonomous to manual operation, has potential uses beyond its original purpose.

It's not the first of its kind. A German company debuted a self-driving bicycle prototype at EuroBike fair last year. But the i-Bike's appeal is its multi-mode function: The bike switches between automatic locomotion, automatic steering and manual mode. This gives the rider total control of how they want to use the bike. An arm amputee can manually ride the bike but utilize automatic steering, a leg amputee could steer themselves while the bike propels itself, and a blind rider could use both automated systems. The bike has retractable training wheels, as well, for auto-locomotion.

The bicycle runs on wireless phone networks, using smartphone and GPS technology. It can be driven to a specific place by sending an SMS text with the location information. Once the coordinates are in place, the bike is on its way, using mounted sensors to navigate around unexpected obstacles on the road.

Because of that aspect, the i-Bike also has the potential for another use: bike-share systems, which have gained popularity in cities worldwide. Its hybrid-use design would allow for the bicycle to be ridden by a driver to its new location, then sent automatically back to its station.

"The initial motivation for us was to develop a bicycle which could help the disabled people call the bike from a parking station. But as we worked on newer designs, we learned that our product has bigger implications in improving the last-mile transportation scenario through usage in the already existent bike-sharing systems," said Ayush Pandey, one of the student engineers behind the i-Bike's design.

Currently, the i-Bike is in its prototype phase. The team of engineering students behind it are still pursuing their undergraduate studies, but hope to get the bike up to product level within the year before they graduate. The team has mentioned its relative affordability, estimating a cost of between 35,000 to 50,000 rupees, ranging from roughly $500 to $750 US.

This isn't the first tech development where its utility benefits disabled and non-disabled people alike. The AI revolution has largely been a boon to the disabled, and technology like Siri, self-driving vehicles and 3D printing all provide assistive services. Engineers often mention the advantages of designing with an eye toward multiple uses, including accessibility for the disabled, which can often lead to cleaner, better design. It's one way to utilize resources when developing technology for a relatively small population.

Twitter Heard You: The 140-Character Limit Is Here to Stay
Flipkart Says CEO's Email Account Not Hacked but Spoofed