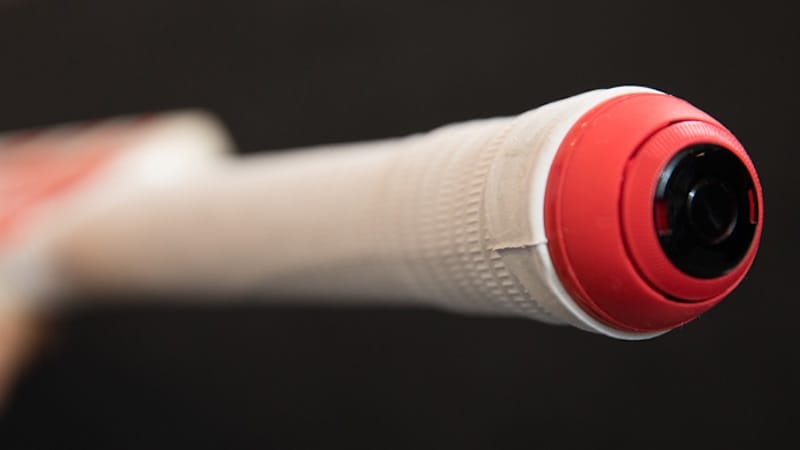 Cricket’s relationship with technology has often been fraught. While some things like the use of TV footage to decide run-outs and stumpings has been in place for a very long time, overall, cricket administrators have been reticent at best when it comes to expanding the use of technology. In recent years, cricket has brought in a decision review system (DRS) to allow players to get additional umpiring calls checked using technology.

Beyond that, Bengaluru-based sports-tech startup Speculur says video analysis is perhaps the only technology that is accepted widely in cricket. Video analysis has been used to study and decode mystery bowlers such as Sri Lanka’s Ajantha Mendis and to find chinks in batsmen’s armour.

Speculur, along with Intel, believes it may have unlocked the next big technological advancement in cricket. The two companies have partnered to develop the Speculur Batsense, which is a tiny 50-gram sensor that can be affixed to the top of any bat’s handle.

The sensor is capable of analysing data such as the swing of the bat, the speed at which it is swung, the batsman’s form, how much a player lifts the bat before striking the ball, among other things. Speculur BatSense was used extensively during the recently concluded ICC Champions Trophy in England and Wales. It has been used to highlight things such as bat speed when the bat hits the ball and the backlift of the bat when facing various bowlers.

TV commentators have used this technology to analyse why batsmen got out, how they deal with fast bowlers or spinners, or even what is their maximum bat speed as they hit the ball. However the real application of this technology is in training. Cricketers often spend hours in the nets practicing their batting skills and the feedback they have is whether or not they were striking the ball well in the nets. With Speculur’s Batsense that may change as coaches and batsmen get more data on how they’ve been batting.

“When we looked at cricket equipment market [we realised] that the market is growing at 3 percent CAGR for the last 10 years," says Speculur MD Anuj Srivastava. "A new thing which comes in cricket is a new sticker on the bat. The stitch on the pad changes but everything else remains the same.” Srivastava’s remarks are light hearted but the larger point around cricket remaining largely shy of technology stands.

“Players told us that you have all the technology in the world to get me out," he adds. "[but] there is nothing which gives me a solution to improve my game.” According to Speculur the cricket bat occupies around 50 percent of the cricket equipment market and that was a big driver towards making this sensor for the bat.

A new thing which comes in cricket is a new sticker on the bat. The stitch on the pad changes but everything else remains the same

Srivastava says many cricket matches, especially at the local level, are not televised and batsmen get no data from these matches. He says many coaches have asked for basic data like how many balls each batsman has faced, emphasising how even this basic data is something that coaches lack today. Batsense syncs with smartphones via Bluetooth and is able to share this, and other data, Srivastava explains, "The coach can see how many days you’ve practiced."

“If I give you a summary of a wagon wheel that says today you played 100 balls, [we can tell you] of which 40 balls you hit on the on-side,” Srivastava adds.

There were plenty of challenges while developing the Speculur Batsense. Srivastava says that ICC rules don’t allow any foreign element on the bat. This means that the bat has to be made of wood and cannot have any other thing on the wood. The only place where they could place the sensor was at the top of the handle, where it doesn’t interfere with the bat.

“The bottom half of cricket bats is much heavier than the top. Many batsmen wrap tape on the handle as a counter-weight. Many of them have told us that Batsense adds that counter-weight and they don’t have to use tape anymore,” Srivastava says.

The Batsense is priced at Rs. 10,000 and has around four hours of battery life. That means it’s good enough to analyse a long session of batting in the nets, or a full innings’ worth of batting in a 50-over cricket match. However, it’s not perfect for analysing a day-long 90-over innings in a test match at the moment.

A lot of testing has gone into making it, so as to ensure that the sensor doesn’t pick up random swings of the bat as actual strokes.

Something similar isn't likely to come for bowlers though. It’s much harder to bring similar technology to a cricket ball because that alters the structure of a ball. Cricket balls are also used for a few overs before being discarded, which makes adding technology an expensive affair. At the moment, Batsense looks like it a product that could help budding cricketers and professionals alike.

Disclosure: Intel sponsored the correspondent’s travel and hotels for a trip to Birmingham, where Speculur’s briefing took place.

OnePlus 5 Price in India Leaked Yet Again Ahead of Launch