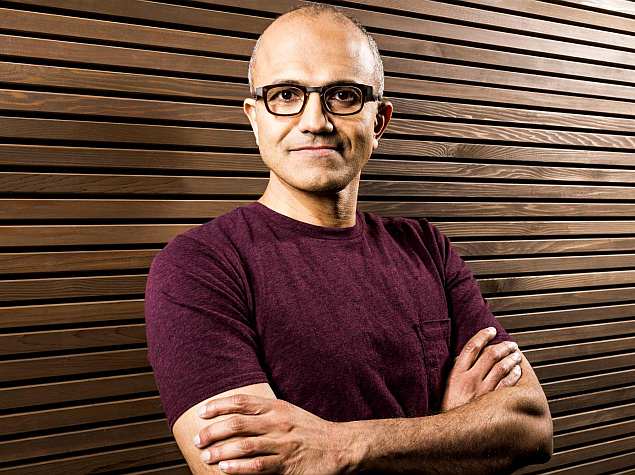 Since Steve Ballmer announced his retirement in August 2013, everyone had been speculating who will be the new Chief Executive Officer.

On 4 February 2014, Microsoft announced that Satya Nadella, a 22-year veteran at the Redmond-based company, will take over as CEO effective immediately, making him just the third CEO in the company's history.

Who is Satya Nadella?
Born in 1969 in Hyderabad, India, Satya Nadella finished his schooling at the Hyderabad Public School. Reminiscing about his early days, Nadella said that while growing up, playing cricket was his passion, and he played it competitively as a member of his school's team. "I think playing cricket taught me more about working in teams and leadership that has stayed with me throughout my career, " said Nadella.

Knowing that he "always wanted to build things," Nadella joined the Manipal Institute of Technology to pursue a Bachelor of Engineering degree in Electronics and Communication. It turned out to be a prescient decision, with Nadella saying, "it was a great way for me to go discover what turned out to become a passion."

He, like so many of the engineers at the time, followed his passion and completed his engineering education abroad, with a Master of Science degree in Computer Science from the University of Wisconsin-Milwaukee.

Speaking about his thirst for knowledge, Nadella said:

Till date, the high-powered corporate executive often signs up for online courses, and he says it is because of "just crazy ambitions in the 15 minutes I have in the morning. You know, I'm trying to listen to a neuroscience class or something. I kind of ask myself, why are you doing it? But I love it."

Nadella started his career at Sun Microsystems, before moving to Microsoft in 1992, where he joined as a Program Manager in the Windows Developer Relations group. Nadella had begun pursuing a Master of Business Administration degree from the University of Chicago, when Microsoft's job offer came in.

He decided to finish his degree while also taking up the Microsoft job - it took him two-and-a-half years to complete it. Nadella described those hectic days, saying, "I used to fly to Chicago Friday nights, attend classes Saturdays and come back to Redmond to work during the week."

Looking back, Nadella, in his letter to employees after being named CEO, spoke about his reasons for joining Microsoft, writing:

"I am here for the same reason I think most people join Microsoft - to change the world through technology that empowers people to do amazing things... Many companies aspire to change the world. But very few have all the elements required: talent, resources and perseverance. Microsoft has proven that it has all three in abundance."

Nadella is also considered to have played a significant part in Microsoft's foray into advanced technologies like digital rights management (DRM) and interactive television (ITV).

As the head of the company's Server and Tools Business, Nadella spearheaded the 'transformation of the business and technology from client-server software to cloud infrastructure and services,' according to Microsoft.

Speaking about his job at Microsoft, Nadella revealed what to him is the high-point of his work day:

"One of the things that perhaps excites me the most is when I come across something at work, whether it's somebody who's really done a great feature in software, come up with a fantastic idea in pricing or done a great customer program, or just an approach to their job that is innovative or brought teams together - and I just, wow, I marvel every day at how people can excel - and that's what really gets me going."

Who is Satya Nadella, outside of Microsoft?
In his letter to Microsoft employees after being named CEO, Nadell introduced himself, saying:

"I am 46. I've been married for 22 years and we have 3 kids. And like anyone else, a lot of what I do and how I think has been shaped by my family and my overall life experiences. Many who know me say I am also defined by my curiosity and thirst for learning. I buy more books than I can finish. I sign up for more online courses than I can complete. I fundamentally believe that if you are not learning new things, you stop doing great and useful things. So family, curiosity and hunger for knowledge all define me. "

Further describing himself outside of office, Nadella says he finds relaxation by reading poetry in all forms by American and Indian poets:

"It's like code. You're trying to take something that can be described in many, many sentences and pages of prose, but you can convert it into a couple lines of poetry and you still get the essence, so it's that compression."

Nadella also said he enjoys watching Test cricket, "which is the longest form of any sport in the world. I love it. There's so many subplots in it, it's like reading a Russian novel."

Perfect for the top-spot at Redmond?
With his experience, Nadella seems to fit the envisioned role for the new CEO of Microsoft perfectly, a company that is hoping to metamorphose from a software giant into a devices and services company, a move heralded by the acquisition of Nokia's mobile division, first announced in June 2012, and development of the Surface tablet range. John Thompson, who is chairing the search committee, had described the role at Ballmer's retirement announcement:

"The board is committed to the effective transformation of Microsoft to a successful devices and services company. As this work continues, we are focused on selecting a new CEO to work with the company's senior leadership team to chart the company's course and execute on it in a highly competitive industry."

Bill Gates had also outlined the requirements for the CEO role at Microsoft, saying:

"It's a complex role to fill - a lot of different skills, experience and capabilities that we need. It's a complex global business the new CEO will have to lead. The person has to have a lot of comfort in leading a highly technical organization and have an ability to work with our top technical talent to seize the opportunities."