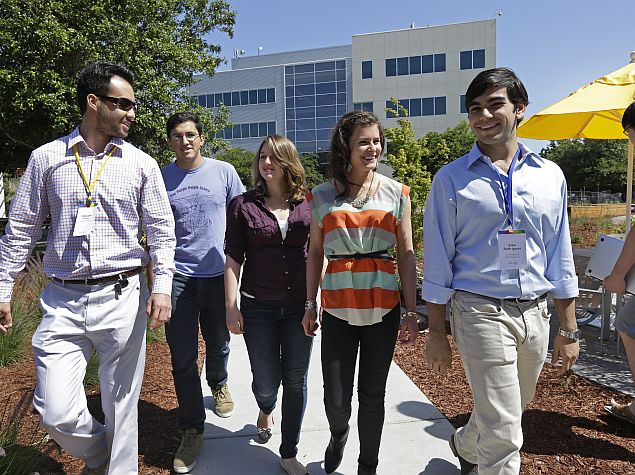 When Efe Cakarel picked London as a new base for his video streaming company, he was counting on its location, capital markets and infrastructure, but also on the city's reputation as a hub for talented people from Europe and beyond.

Four years later, the 38-year-old entrepreneur has a half-dozen engineering vacancies that he says haven't been filled for nearly a year because of a local shortage of top-tier programmers. Immigration restrictions, he says, have made it harder to tap into the global pool of talent, costing his 7-year-old startup, MUBI, subscribers and revenue.

"We're ready to grow, but without the right workers, we just can't expand," he said.

One study has found migrants are behind one in seven companies in the UK. The European Commission has said almost half a million tech vacancies may come up in Europe next year and job websites advertise tens of thousands of tech vacancies in Britain, pointing to a bottleneck of talented people from around the globe.

At the same time, cities from Toronto to Sydney are boosting efforts to open their doors to skilled migrants, particularly in the strategic tech sector. TechUK, an industry lobby group, earlier this week called for smarter policies to attract more talent. "There are an incredible number of city-led initiatives worldwide to highlight the effect migration has on cities," said Kim Turner of the Toronto-based Maytree Project, an immigration think tank.

Entrepreneurs say Australia, New Zealand, Canada, Chile and Germany are some of the national governments that are best responding to the need to attract high-skilled migrants.

London's situation highlights the mounting tension between the needs of city business and the political mood in the country at large. More than many, the city's efforts to stay competitive set it against public opinion and the national government.

As in other European economies which have struggled to create jobs since the 2008 financial crisis, migration is a growing concern in Britain. This was crystallised in May when the anti-immigrant UK Independence Party (UKIP) won the biggest share of the vote in European Parliament polls. Its rise has pushed both major parties to toughen their stance on immigration ahead of May 2015 elections.

Prime Minister David Cameron has promised to reduce net migration to the "tens of thousands" from 212,000 in 2013 and recently accompanied law enforcement on a raid on suspected illegal immigrants before holding a press conference in the suspects' home.

"It is nonsense to suggest our policies prevent companies appointing the skilled workers they need - the number of skilled people coming to work in the UK was up 16 percent last year," a government spokesman said. "The UK is open for business to the brightest and best migrants and remains an attractive destination for global talent."

Still, some in the tech community, higher education and other sectors that rely on migrants say gestures like Cameron's send the wrong message overseas, and risk harming Britain's competitiveness in the long term.

"The Prime Minister's net migration target is kind of meaningless, or arbitrary in the sense that you have a target that isn't aligned to any economic plan, it's just about numbers," Mark Hilton of London First, the city's lobbying arm, said.

"When you see the way the UK government talks about immigration and how that's picked up in the foreign press ... you risk making London look less welcoming to foreign talent."

Visa quota
Cakarel came from Palo Alto, California in 2010 and describes MUBI, an online service which offers one movie a day, as "a curated selection that gets rid of the paradox of choice." Its subscriber base is now growing at 3 percent a week, but he brought it to Europe to avoid being eclipsed by Netflix, Hulu and other big players.

"We knew that Europe would be our target market, so London was the natural choice," he said in a Soho office reminiscent of a rich kid's dorm room, with a skateboard mounted over the fireplace, a low-slung couch facing a flat-screen TV, and an Apple Mac humming in the corner.

Financially well-off and with a business degree from Stanford University, Cakarel came in on one of Britain's special visas for the highly skilled, which didn't require a company to sponsor him so he could set up shop.

The firm dipped into the 5 million pounds ($8 million) it had raised mostly from U.S. venture capitalists to cover rent, salaries, and taxes in Britain. But as it was growing, Britain's national immigration debate was heating up.

Like every European Union country, Britain is obliged to keep its borders open to most Europeans, who make up the majority of immigrants. So after the financial crisis hit jobs, the government tried to crack down on migrants from outside Europe.

In 2012, it stopped issuing the highly skilled visa that brought Cakarel to Britain, as well as one known as a Tier 1 post-study work visa, which allowed foreign students at British universities to work for a time after graduating.

Cakarel and others were baffled. "The fact that such an attractive, well-crafted process to get some highly educated, highly skilled people into this country is for some inexplicable reason gone, that doesn't make sense to me," he said.

Following an outcry from the tech community, a Tier 1 "exceptional talent" visa was established in April to attract the most promising minds in tech.

But it has a quota of 200 a year. The number of London firms seeking workers suggests that will not be enough: There are nearly 1,000 startups in the city and a tenth of them are hiring, according to startup website Angel List.

Startups aren't the only ones. The lean young operations of "Silicon Roundabout" in east London have to compete with the City's deep-pocketed banks and multinationals, whose staff and lawyers are skilled at navigating the immigration system.

"A lot of these startups gain traction and build momentum, moving from the 'startup' to the 'scale-up' stage quite quickly," said Russell Shaw of Tech London Advocates. "But that means they need to hire more talent quickly, and the current system makes it hard to do that."

Obstacles to scaling
Immigration lawyers say the visa clampdown means startups can only either hire within the European Economic Area, or tackle mighty bureaucratic hurdles and legal fees.

"One of the questions I get from investors is 'what're the obstacles to scaling this business?'" said Ed Bussey, founder of Quill, a digital content provider. "It's not the tech, or a shortage of clients. The challenge is a shortage of high quality staff, and I'm hearing this from many of my peers across the digital tech sector in London."

His startup, founded and based in London, is eager to hire after raising $5 million in March. It is trying to add a dozen more to its 20-person team. Those vacancies remain unfilled, in part because Bussey hopes to find a local developer for web application framework Ruby on Rails.

"It would be a lot simpler to have people within the home market. The long-term solution is we've got to address the training and development issue around this sector," Bussey said. "But I can't wait 10 years. We need people, and I want to be able to hire the best people out of Silicon Valley."

A May analysis by social network LinkedIn of where its members were relocating for work showed the top cities attracting workers with tech skills are in India, the United States and Australia. Berlin, Montreal, and Toronto also beat London. Even the United States, which is in the middle of its own immigration debate, retains equivalents of Britain's highly skilled and post-study visas, which London firms say would boost hiring.

London vs Britain
Anti-immigrant sentiment in Britain is nothing new, but politicians are playing on it more than in the past. More people in Britain than in several comparable countries rank immigration as the single most important issue facing their country, said a July report by the Oxford University Migration Observatory.

Against that backdrop, few politicians from the major parties will say restrictions go too far.

"Businesses like ours who are carrying vacancies, are caught in the crossfire of a very sadistic debate," Bussey said. "The tone of the debate in the media is about 'how do we get the numbers down?' I'm not saying these are not legitimate questions, but it's taking a very polarised view that hurts companies."

"We're a way off having enough (British) people with the right qualifications and experience," she said. "In the meantime we should embrace the migrants who have so much to contribute. If we don't, London will lose its edge and even the government might rue its uncompromising anti-immigration messages."

"Look, it's all about people, people make things happen," said MUBI's Cakarel. "If you have the right policies in place to keep the talent, that country is going to do well. If you don't, then talent is going to go somewhere else."