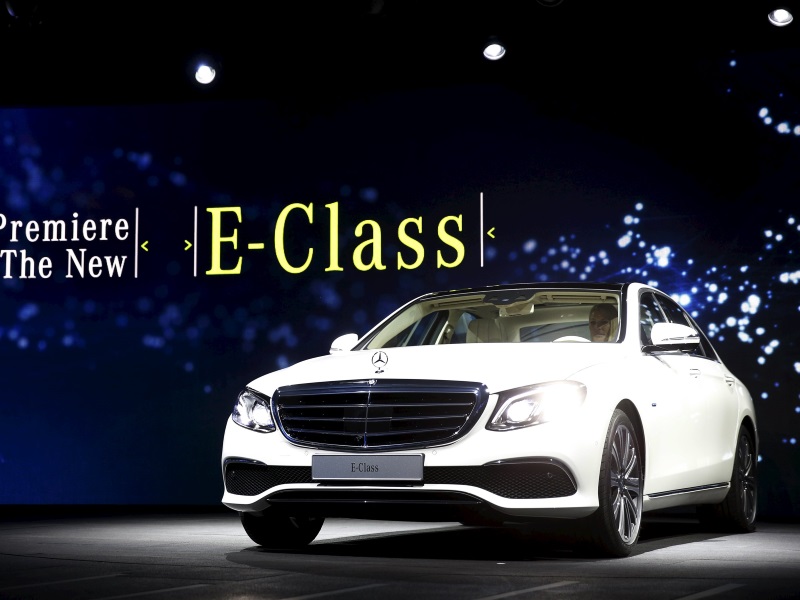 Rapidly evolving technology is upending the traditional pecking order in the luxury car market, which until now has operated on the principle that bigger is better.

Now, Mercedes-Benz and a host of others are quietly changing the rules.

Mercedes' new E-Class mid-sized sedan, unveiled at the Detroit auto show Monday, will come with better computer chips, cameras, software and sensors than those in the larger and more expensive S-Class - the flagship that has for decades showcased the automaker's latest technology.

"The speed of innovation is so fast that you have to use every launch of a new model to roll stuff out," Dieter Zetsche, head of Mercedes-Benz Cars told Reuters on the sidelines of an event to launch the new E-Class at the Detroit Auto Show.

The shift reflects intense pressure on automakers to keep their model lineups on the technological edge, especially to compete for younger customers. Another sign: features that can be updated with software, a tactic used often by Silicon Valley electric car maker Tesla Motors and likely to spread across the industry.

Mercedes plans similar software updates and is moving aggressively to update its hardware as well. It has cut the time it takes to produce a prototype to 10 months from 18 months, in part through the use of digital prototypes. Aerodynamic testing, for example, is done largely with simulation software, cutting development time in a wind tunnel.

The E-Class has fourth-generation driver assistance systems, while the top-of-the-line S-Class makes do with third-generation technology, executives at Daimler , parent company of Mercedes-Benz, explained in Detroit.

More recent sensors and software give the new E-Class better algorithms to recognise a street, a vehicle or a pedestrian, giving the vehicle a better ability to interpret its surroundings. This in turn allows the Mercedes to travel greater distances in self-driving mode.

It also has car-to-car communications technology, allowing it to exchange information with vehicles ahead to receive warnings about potential accidents or broken down vehicles ahead.

The current S-Class model, which has been in showrooms since 2013, does not have the same capabilities.

That is because the launch date of the new E-Class was better timed to take advantage of improvements in computing and sensor technology, as well as regulatory changes needed to make autonomous and semi-autonomous driving a reality.

Mercedes plans to continue the strategy of introducing its latest breakthroughs with the earliest feasible model debut. Other automakers may well follow suit. "The best features were always introduced into the highest end vehicles. That is not going to be the best solution for the car industry anymore," said Thilo Koslowski, vice president of the automotive practice at technology market research firm Gartner. "Younger customers want the latest features immediately, and this will force carmakers to change their offerings, and it will change the way they define premium."

Mercedes-Benz already introduced its Collision Prevent Assist Plus into the compact B-Class before it spread it to larger vehicles.

Zetsche acknowledged that the shift could cause some would-be S-class buyers to migrate to the less expensive E-class, but the more important purpose is to steal customers from Audi and BMW.

Further, he said, Mercedes may choose to update older models like the S-class as well.

Consumers are driving the changes, said Andrew McAfee a principal research scientist at Massachusetts Institute of Technology, who studies how digital technologies are changing business and society.

"A car is the second-biggest investment you will ever make, so you do not want to buy something obsolete," he said.

Other automakers are also moving away from waiting on top-shelf models to package new technology. When BMW AG launched its new 2-series in 2014, it had a navigation system that could be upgraded over the air, a company spokesman said. The company's top of the line 7-series only got that function when it was redesigned last year.

Ford Motor Co is using its mid-sized sedan, the Fusion, as the package for new hands-free automatic parking and lane-keeping features.

In the past, the automaker might have waited for the release of the next flagship from its Lincoln luxury division to unveil top-end technology.