A Fight for the Dashboard 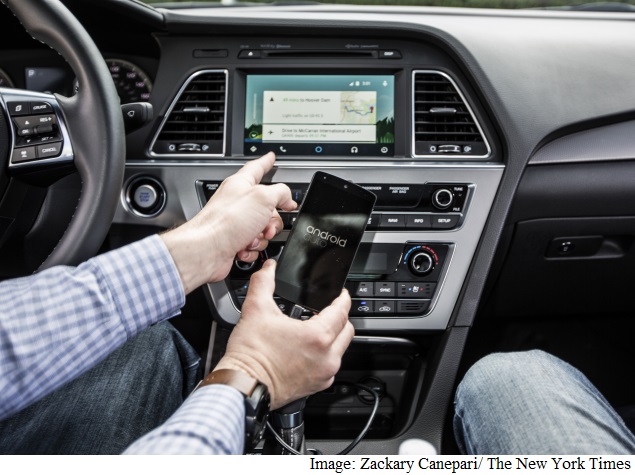 When Google hosted a boot camp here this month for its Android operating system, there were some new faces in the room: auto manufacturers.

They made the trip to learn about Android Auto, a new dashboard system meant to let a smartphone power a car's center screen. Tasks as varied as navigation, communication and music apps, all constantly talking to the cloud. And to the driver.

A similar scene is playing out just a few miles down the road at Apple, where a rival system, CarPlay, has been developed for iPhone users.

After years of being treated as an interesting side business, autos have become the latest obsession for Silicon Valley, with Apple assigning about 200 engineers to work on electric vehicle technology and Google saying it envisions the public using driverless cars within five years.

But nowhere is that obsession playing out more immediately than in the battle to develop the next generation of cars' dashboard systems. In the coming weeks and months, dealerships around the country will begin selling vehicles capable of running Android Auto, Apple CarPlay, or both.

The systems go far beyond currently available Bluetooth pairing for playing music or making a hands-free call, and allow for Google's or Apple's operating system to essentially take over the center screen and certain buttons within the car.

"Consumers have spoken," said John Maddox, assistant director of the University of Michigan's Mobility Transformation Center. "They expect to have coordination between their phone and their vehicle."

In California at Google's headquarters, Android Auto is about to make its debut in Americans' cars after two years in development. Plug in a smartphone with a USB cord and the system powers up on a car's screen. The phone's screen, meanwhile, goes dark, not to be touched while driving.

Apple's CarPlay works similarly, with bubbly icons for phone calls, music, maps, messaging and other apps appearing on the car's center screen. (Apple declined to comment for this article.)

While the idea of constantly connected drivers zipping along roads raises concerns about distracted driving, both companies say their systems are designed with the opposite goal: to make cellphone-toting drivers safer.

"We looked at what people do with their phones in the car, and it was scary," said Andrew Brenner, who heads Google's Android Auto team. "You want to say to them, 'Yikes, no, don't do that.'"

Brenner said his team tried to figure out how to minimize distraction during tasks people frequently do while driving, while also deciding what should be prevented in the car altogether. Google even built its own driver-distraction lab, to test different variations.

Android Auto, for example, has no "back" button like the smartphone version. No "recents" button either. Google Maps has been adjusted to make fonts bigger and streets less detailed, for easier reading while driving.

No action should take more than two seconds - consistent with the Transportation Department's voluntary guidelines.

"Things that we don't show are just as important as what we do show," Brenner said.

Music is most definitely in. Streaming video? Most definitely not. Most social media will also be blocked, and texts can be sent only with voice commands. Apps on the screen are optimized for speed: glance, touch and eyes back to the road.

"It's these little glances at the screen that people do in a car," he said. "We want something that's very glanceable, that can be seen and done quickly."

On a recent afternoon, Brenner drove through the streets here in a Hyundai Sonata equipped with a demonstration version of Android Auto. Part techie, part car guy, Brenner was hired two years ago after Google discovered he had rigged up a Nexus 7 tablet to his dashboard in an early attempt to make his own connected car.

"Navigate to Krispy Kreme," he said after settling into the driver's seat. Up popped the nearest location on the screen, and a voice began turn-by-turn directions. A little music never hurt either: "Play Black Sabbath," he said.

The Krispy Kreme near Google's campus played a notable role for Brenner and his team of engineers. It was the destination they always tried to reach during testing without Android Auto failing along the way.

"They thought we were a little nuts," he said. "We would pull up with four people taking notes and order three dozen doughnuts for the engineering team."

It took until last April to finally succeed in making the trip without a glitch. They added some Champagne to bring back from that doughnut run.

When the Android Auto project began, it included a core group of automakers like General Motors, Audi, Honda and Hyundai. Now, as it prepares for its debut, roughly two dozen car brands have signed on to offer it soon. Apple has teamed up with roughly the same number of brands, many of which will offer both systems.

Most automakers are staying mum on their exact start dates, but Hyundai is expected to act shortly, and Volkswagen has indicated availability for its next Golf. GM has said the same about its Spark subcompact.

One of the most widespread adopters will be Ford, which this year will begin offering both Android Auto and CarPlay in conjunction with the revamping of the automaker's much-criticized Sync system. By the end of 2016, they will be available on all Fords sold in the United States.

"We don't want people to have to make a vehicle choice based on which mobile phone they have," said Don Butler, Ford's executive director for connected vehicles and services. "We want to accommodate all customers and their devices."

While automakers traditionally aimed to control all aspects of the infotainment experience - building their own closed-off, proprietary systems - the results were not always stellar. And the pace of technology meant a car's hardware and software could become dated quickly.

In some cases, the systems carried what seemed to be needless costs, like an annual fee for updating map software - something unthinkable for any user of Google Maps or Apple Maps.

Butler said that leveraging smartphones and the ecosystem of apps surrounding them provided a new way forward.

"The challenge with closed systems is you need to predict where the future is heading, or have enough robustness that it's future proof, which of course is virtually impossible," he said. "We think it's better to put a broad platform for innovation in place."

One area where automakers have struggled mightily, but the tech giants have found more success, is in voice recognition. Using voice commands has huge potential to help keep drivers' eyes focused on the road. The challenge there is that they have to work.

"Many of the systems out there now in cars, the voice interface is almost unusable," said Maddox, the University of Michigan transportation expert. "It's inaccurate, people get frustrated and they'll just stop using it."

In Apple's CarPlay, Siri, the voice-controlled assistant, guides the system, and the company provided specifications to automakers to ensure that a user's voice is easily understandable while inside the car. If a user's car has a touch screen or control knobs, CarPlay can be controlled that way as well.

Google has taken similar steps to make sure that consumers can speak as they normally do.

As he approached the doughnut shop, Mr. Brenner said that getting consumers comfortable with voice commands is all about allowing them to say things in different ways.

But despite the momentum building in Silicon Valley, not all automakers are sold on the idea of giving up their dashboards to the tech giants.

John Hanson, the national manager of Toyota's advanced technology communications, said while the company talked frequently with both Google and Apple, it had no plans to adopt Android Auto or CarPlay in the United States.

"We may all eventually wind up there, but right now we prefer to use our in-house proprietary platforms for those kinds of functions," Hanson said.

Fiat-Chrysler, considered to have one of the better infotainment platforms on the market, has signed on to support Google's and Apple's systems. But a bit of lament is evident.

"We're confident that our systems deliver a good experience for our customers," said Eric Mayne, a spokesman at Chrysler. "But we're not standing still either."

As Brenner pulled into the drive-through line at Krispy Kreme, the attendant on duty, seeing three people in the car, asked: "You guys want anything?"

"Only one?" came the surprised response. "Anything else?"