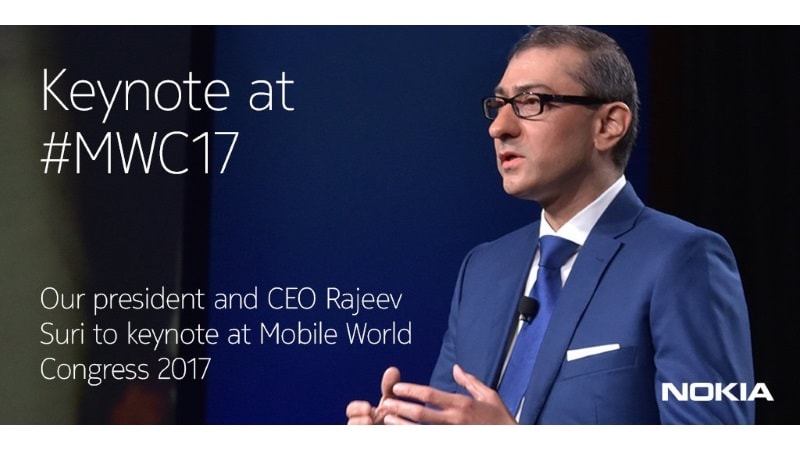 Be it Pokemon Go, Harry Potter and the Cursed Child, or Star Wars: The Force Awakens, there is a common factor that has resulted in unprecedented success for these franchise entries recently: nostalgia. If we talk about Nokia, it can easily benefit from this same factor if it does eventually release its leaked smartphones. Many people started out with Nokia phones as their daily drivers and have a fondness associated with the company. This is precisely why people are excited that Nokia has confirmed that its CEO Rajeev Suri will deliver a keynote speech at MWC 2017.

It should be noted that even though it is the biggest gathering for the mobile world, currently Nokia's primary business is to supply telecom equipment and Suri might end up talking about the same field. However, there have been several leaks that have suggested that the company might soon be coming up with Android smartphones, and it's possible the Nokia CEO will make the much-anticipated announcement.

Other keynote speakers at the event include AT&T Entertainment Group CEO John Stankey, Kaspersky Lab Chairman and CEO Eugene Kaspersky, and Niantic CEO John Hanke. The work profile of the other speakers further suggests that the theme of the speech might be broad-based rather than company-specific.

Last week, a listing on benchmark site GFX Bench suggested that Nokia's D1C device is a 13.8-inch Android tablet, and not a smartphone as anticipated earlier.

Leaks have suggested that the company will be coming out with two phones with screen sizes of 5.2-inch and 5.5-inch. The smartphones are pegged to sport 2K resolution (QHD) displays and were tipped to come with IP68 certification, which effectively means they will be highly resistant to water and dust, similar to the Samsung Galaxy S7 Edge and Galaxy S7.

YouTube Ropes in Dwayne 'The Rock' Johnson for New Show