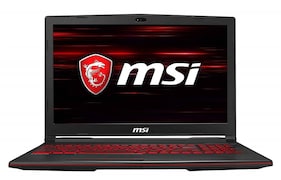 With the launches of Nvidia's GeForce GTX 16-series GPUs and Intel's 9th Gen Core CPUs for high-performance laptops earlier this year, hardware makers have refreshed their offerings and we're now seeing a flood of them in the market. Many of these models are in demand right now, and we've seen some great prices during all the recent festive sales. MSI, one of the biggest names in the PC hardware and gaming space, has been quite successful in pivoting towards pre-built gaming laptops and the company's range in India is quite vast. It's no surprise then that we have with us the new MSI GL63 9SD-1041IN for review.

The GL63 9SD-1041N is relatively portable and can be carried around every day. It has a comfortable enough keyboard layout with plain red backlighting, though the keys themselves are mushy. The trackpad has physical buttons which aren't very easy to press. Build quality is generally quite solid though, and we liked the number and variety of ports available on the left and right.

MSI includes software that lets you download and run Android games on the laptop. This is a little awkward, but generally worked well. Our usual games and tests also ran quite well, and performance was in line with what we'd expect from a laptop at this price.