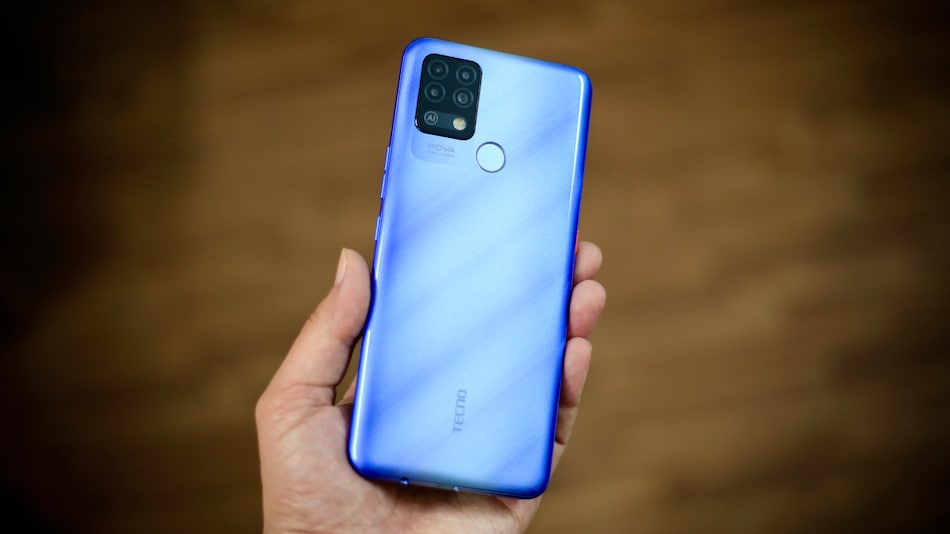 Tecno Mobile has launched its latest budget gaming smartphone in the market and they are calling it POVA. Some of the key highlights of this latest smartphone include the MediaTek Helio G80 SoC ticking at the helm, a large 6.8-inch hole-punch display, a humongous 6,000mAh battery with 18W dual IC Flash Charge. Positioned competitively at a starting price of Rs. 9,999, Tecno POVA looks all geared up to offer good specifications and performance coupled with a sleek design. We spent some time using Tecno's latest smartphone and these are our impressions from using the gaming smartphone.

POVA sports an eye-catching design on the rear panel and the smartphone felt rock solid in our hands. This phone is offered in three different colours — Dazzle Black, Magic Blue and Speed Purple. Despite having a large battery inside, the phone feels sleek and the rounded edges at the back also help in gripping this big smartphone. The front is graced by a 6.8-inch Dot-in display with 90.4% screen to body ratio and an HD+ (720x1640 pixels) resolution, which is an LCD panel and a good one we must add. Viewing angles are good and within our brief time with the device, we didn't have any issues using it even under direct sunlight thanks to its 480 nits brightness.

Tecno POVA has its power and volume buttons positioned on the right side of the phone. These buttons are clicky and offer good feedback. On the left, there's a textured dedicated key to summon the Google Assistant. Above that is the triple slot which features the dual-Nano SIM slots and a separate slot for memory expansion via microSD. At the bottom, you'll find a microphone, a micro-USB port and a 3.5mm headphone jack, while the top remains blank. Moving to the rear is where you find the quad-cameras (more on them in a bit) and the capacitive fingerprint scanner, which turned out to be fast and accurate.

In terms of software, Tecno POVA runs on HiOS 7.0 based on Android 10. While we would have loved to see stock Android on this smartphone, Tecno's custom skin has a few good points of its own. Browsing through the UI feels good; animations and transitions are smooth. One of the small yet useful features in HiOS 7.0 is when you do the back gesture and hold it, a small carousel opens up that holds quick actions and lets you jump to your favourite apps with just a single tap. The best part is that you can access it from any screen.

Talking about the specifications, there's an octa-core MediaTek Helio G80 SoC running the show. There are two variants on offer — 4GB of RAM coupled with 64GB of storage and 6GB of RAM coupled with 128GB of storage. You can also expand the storage via microSD to up to 256GB. The company has also packed a 6,000mAh battery under the hood and you also get an 18W Dual IC Flash charger which is 20% faster than single IC fast charger bundled in the box for quick charging. It completely charges the powerful battery of POVA in just 131 minutes.

During our brief time with the device, we have to say the phone performed quite well. The MediaTek Helio G80 is a gaming optimized processor and it had no problem handling high-end games such as Call of Duty and Asphalt 9 with good frame rates at high settings. The battery is quick to charge considering it is a huge one, and even better it has tremendous endurance. We played Call of Duty: Mobile (high graphics setting) at a stretch for 30 minutes and Asphalt 9: Legends (high graphics setting) for about 40 minutes, only to notice that the phone's rear panel barely got warm to the touch as it has a better heat dissipation mechanism and has thermal conductive gel inside. We started playing these games at a 100 percent charge, and after more than an hour of gaming, the battery level only dropped by just 11 percent. We'll reserve our final judgement about the phone's performance, software and battery after we have done thorough testing, although, so far so good.

Tecno POVA features a 16-Megapixel quad-camera with quad flash at the rear. At the front, there's a single 8-Megapixel camera situated in a punch hole. For those dark times, there's also dual front flash on either side of the single firing speaker at the top. We did take a few photos and videos during our initial tests to find out that the phone's camera performed quite decently during daylight. There are multiple pro modes available in-camera like Macro shots, night portraits, Bokeh, AR Emoji, Slow Motion, Video Bokeh, 2K recording etc. Something that we couldn't overlook is the permanent beautification effect that's applied by default while taking selfies, and there's not even a setting to disable it.

After having used the phone for a few days, we're quite happy with our impression of the Tecno POVA, particularly how well it performs during heavy gaming sessions without any compromise in quality. The large display is beautiful for content consumption, be it for watching videos or simply browsing your favourite social media apps. Apart from this, up to 6GB RAM on the phone ensures all your multitasking needs are taken care of. In our brief time with the phone, we didn't face any issues or slowdowns while loading heavy apps or even switching between them. And, whether you're a casual user or a power user, the 6,000mAh battery will make sure that frequent recharges are a thing of the past.