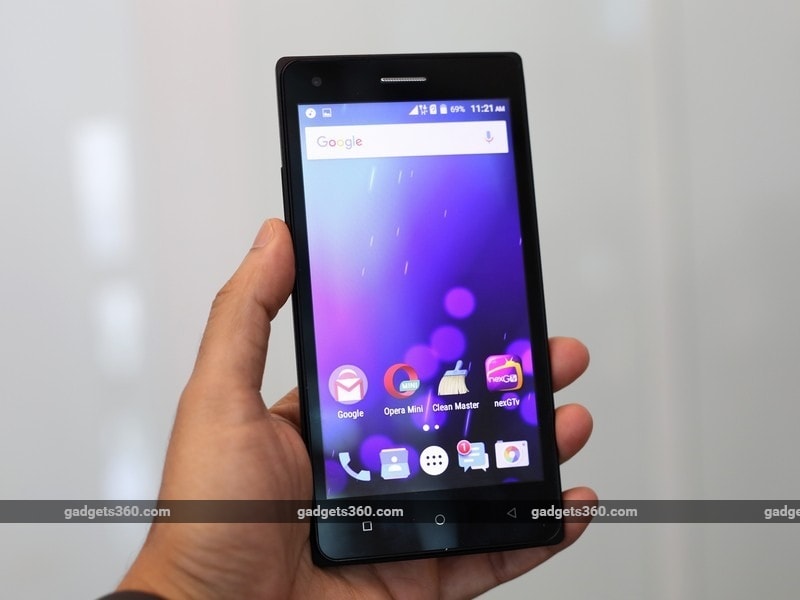 Zen Mobiles is known for its low-cost Android efforts and today, we’ll be taking a look at the newest member of the family. Called the Zen Cinemax 3, the smartphone is the successor to the Cinemax 2, which the company introduced last December.

The new model shares a lot of DNA with its predecessor, but has bumped up specifications and double the onboard storage. But is it worth your while, even at an inviting price of Rs. 5,499? We find out.

Zen Cinemax 3 design and build
At first glance, the Cinemax 3 bears a passing resemblance to the Obi Worldphone SF1 (Review ) due to the exaggerated edges of the rear cover. Build quality is pretty average, although that's hard to tell just by looking at it due to the sandstone texture applied to the back. It adds a good amount of grip and keeps fingerprints at bay.

This protruding frame, while good for aesthetics, poses an issue when you try and charge the device. The USB port is a bit too recessed so even slight movement will cause the connection to break. The plug on the bundled USB cable is longer than usual in order to try to mitigate this issue but it doesn’t work well, and we had multiple disconnections when copying files to and from the device. This also means if the bundled cable gets damaged over time, you’ll have no choice but to remove the cover in order to charge the device with other cables, which is hardly a solution.

There are non-backlit capacitive buttons on the front and a speaker grille on the back. The display doesn’t seem to have improved much from before as it’s still a 5.5-inch panel with a measly 480x854 pixel resolution. This translates to a paltry 162ppi, which needless to say, means that the edges of text are quite jagged. Viewing angles and colour reproduction are quite poor too. There’s neither an ambient light sensor nor a notification LED on the phone.

The battery is removable, and you can also access the two SIM slots and a dedicated slot for a microSD card (32GB) under the cover. In the box, you get a charger, data cable, headset, screen protector, and a case for the phone. The quality of the accessories is strictly average, in keeping with the cost of the phone.

Zen Cinemax 3 specifications and features
The Zen Cinemax 3 is powered by a quad-core Spreadtrum SC7731 SoC, running at 1.3GHz. It also has 2GB of RAM and 16GB of storage. This processor delivers very similar performance to the one found on the Micromax Unite 4 Pro, which is not great. In AnTuTu, we got 22,713 points while the T-Rex graphics test in GFXbench returned only 8fps.

The phone also lacks 4G support on either SIM, which could be a deal-breaker for many. You do get Wi-Fi b/g/n, Bluetooth, GPS, and FM radio. The phone doesn’t support USB OTG either. Sensors include an accelerometer and a proximity sensor.

In terms of software, the Cinemax 3 runs a near-stock version of Android 5.1 Lollipop. Zen has added some customisations such as a lockscreen magazine called PageTwo which shows you news snippets and and lets you play puzzle games. Ultra Zone is a store for buying video clips; NexGTV lets you stream news, TV shows and movies; Zen Care helps you find a nearby service centre; and Zen Store lets you buy wallpapers, music, etc.

Most of the apps from Zen are merely links to websites. There are also plenty of spammy pre-installed apps and some trial games. Thankfully, you can uninstall them all including Google apps like Play Music, Play Movies, etc, through the ‘Delete Application’ option in the Settings app. Last but not least, there's also an SOS feature which sends an emergency message to your selected contact when you press the power button five consecutive times.

Zen Cinemax 3 performance
The Cinemax 3 doesn’t have the most ergonomic design. It’s quite large and the prominent edges don’t make it easy to pocket it either. It runs cool for the most part and we didn’t feel any overheating issues during our test period. Call quality is decent but not great. There’s no 4G support here so you’re left with 3G on either SIM slot. The screen's touch response isn’t very good and reflections can be a real nuisance too.

Android runs well when you’re only browsing through the homescreen pages, but multitasking and even just loading apps can get laggy. Websites are slow to load in Chrome, and scrolling through them gets jerky. You can get away with playing simple games but don’t expect games like Asphalt or even Alto’s Adventure to run smoothly.

The phone handles full-HD video playback but the experience isn’t very good, mostly due to the poor quality of the display. The speaker gets quite loud for alerts of incoming notifications.

The Cinemax 3 has a 5-megapixel rear camera which captures usable close-up shots but that’s pretty much it. Landscapes shots are rife with chromatic aberration and distant objects lack any semblance of detail. Focusing is quite slow, even during the daytime. The trouble is, it’s hard to tell if the picture you’ve captured is good or not as the quality of the display is terrible. Video recording maxes out at 1080p but quality is below average. The front camera is also weak when it comes to selfies.

The camera app is the stock Google camera app so you can get Panorama, HDR and couple of other basic options, but that's about all.

The 2900mAh battery ran for 9 hours and 46 minutes in our video loop test, which is good. With regular use, we easily managed to go beyond a day on a single charge.

Verdict
We think the Cinemax 3 could have been conceptualised much better, if only Zen Mobiles had paid attention to current market trends. Instead, the company has simply refreshed some aspects of last year’s model and it isn't enough. With 4G LTE already going mainstream, it isn't the best idea to buy a new smartphone that lacks support. This alone is a good enough reason to avoid this phone.

To add to the Cinemax 3's woes, the display is mediocre, performance is weak, and the cameras are sub-par. The phone also has a big design flaw concerning its USB port, which interferes with your ability to charge it reliably.

There are other options in the market like the Karbonn Quattro L50 HD (Review) and others, that have better specifications and features. Even with a price drop, the Zen Cinemax 3 is simply not worth the trouble and we recommend giving it a pass.