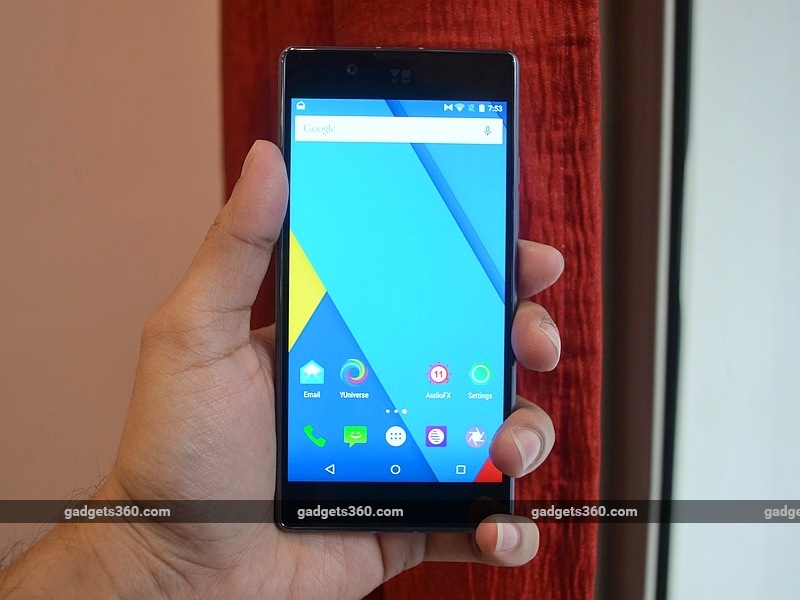 The Yu Yutopia, Yu's ticket to enter the high-spec smartphone category, has been teased for months. Now officially announced, the device is up for pre-order via Amazon, priced at Rs. 24,999 and will start shipping on December 25. Yu Televentures CEO Rahul Sharma unveiled the smartphone at a press event and also announced a new service dubbed Around Yu, which aims to reduce the time taken to download apps for different services such as shopping, booking hotels, flights, taxis, and more. Touted as the 'world's most powerful' smartphone, the Yutopia aims to take on OnePlus 2 and others that fall in the same price segment. The smartphone comes with top-of-the-line specifications but does it only look good on paper or does it really perform as promised? We got our hands on a sample device, and here are our first impressions.

The design of the Yutopia takes clues from other Yu siblings. It sports a metal unibody with antennas running around all four corners on the rear panel. Being slim at 7.2mm, the Yu Yutopia feels good in hand, with a firm grip. Unfortunately, the rear panel is non-removable so there is no access to the device's battery. 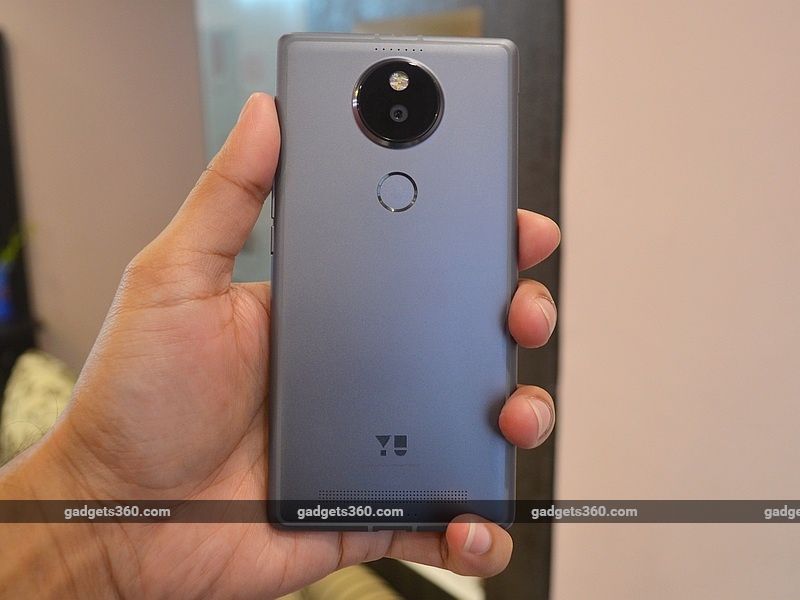 At the back you have a camera and dual-tone LED flash housed within a large protruding circle, which, at first glance, reminded us of the Nokia Lumia 1020. There is a fingerprint sensor below the camera, and you can find the company logo followed by the speaker grille at the bottom. The volume and power keys are easy to reach on the right, and the two SIM slots are on the left. There's one Micro-SIM slot and one hybrid Nano-SIM slot which doubles as the microSD card slot, which means you have to choose one or the other. The headphones jack and Micro-USB port can be found on the top and bottom respectively.

The Yu Yutopia has a 5.2-inch OGS screen with a QHD (1440x2560) resolution for a density of 565ppi. The display is satisfying with great sharpness and saturated colours. Text looks crisp even when zoomed in. Accessing all the corners of the display and typing on it is easy with one hand. This makes the Yutopia one of only a few options priced below Rs. 30,000 to feature a QHD display.

The Yu Yutopia packs Qualcomm's Snapdragon 810 SoC (four 2GHz Cortex-A57 cores coupled with four 1.5GHz Cortex-A53 cores, and an Adreno 430 GPU) and 4GB of LPDDR4 RAM. We were able to multitask between around 20 apps without any hiccups. Games such as Asphalt 8 and Modern Combat 5 were handled well by the smartphone. Since we are yet to test the full potential of the processor, it is too soon to jump to any conclusions. We will reserve our verdict till we can do a full review. The device has 32GB of storage out of which users have access to only around 25GB. However, this shouldn't be an issue as microSD support goes up to 128GB. 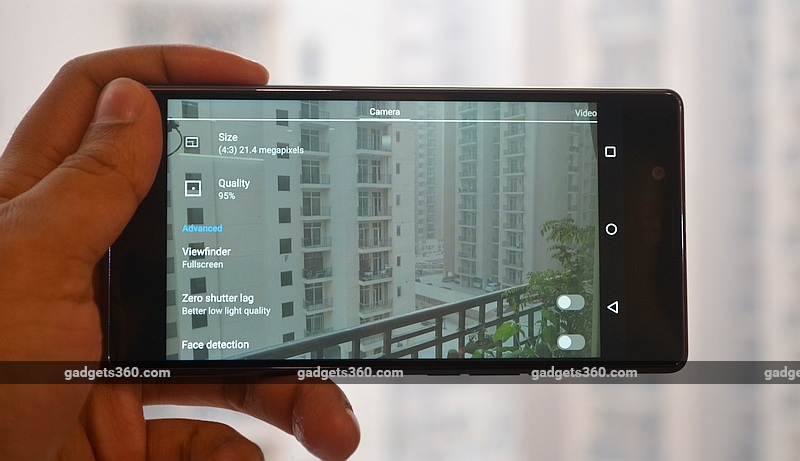 The 21-megapixel rear camera has a Sony Exmor RS IMX230 sensor, true-tone dual-LED flash, a 5P lens, and optical image stabilisation. However, in our limited time with it, we found that the rear camera was not up to the mark. In a well-lit room and outside in daylight, the results were decent. However, in low light it seemed quite unsatisfactory. The camera tends to push the ISO level to its maximum, resulting in grainier images than what other comparable smartphones deliver. The camera takes a second or two to capture images in HDR mode, and these are brightened too much, resulting in some unnatural effects.

The camera UI has minimal controls on the screen. On one side, there are three icons to jump between still, video and panorama shots, while on the other there are a few basic adjustment options. You can swipe on the display to switch between Auto, HDR, Night, Chroma Flash, OptiZoom, Action, and Steady Photo modes. The front-facing 8-megapixel camera with its wide-angle lens and f/2.2 aperture gave decent results and should be enough for casual users.

The Yu Yutopia comes running Cyanogen OS 12.1 which is based on Android 5.1.1 Lollipop. Users will have the option to stick with a stock Android UI or enable Cyanogen's dark theme at the time of initial setup, and this can also be changed later. Either way, most functions are easy to operate and there shouldn't be any issues switching between the two UIs. Cyanogen is currently testing its CM OS 13 release on different devices and is planning a public release sometime in the first quarter of 2016. We are hoping that the Yu Yutopia will be one of the first devices to receive the update. 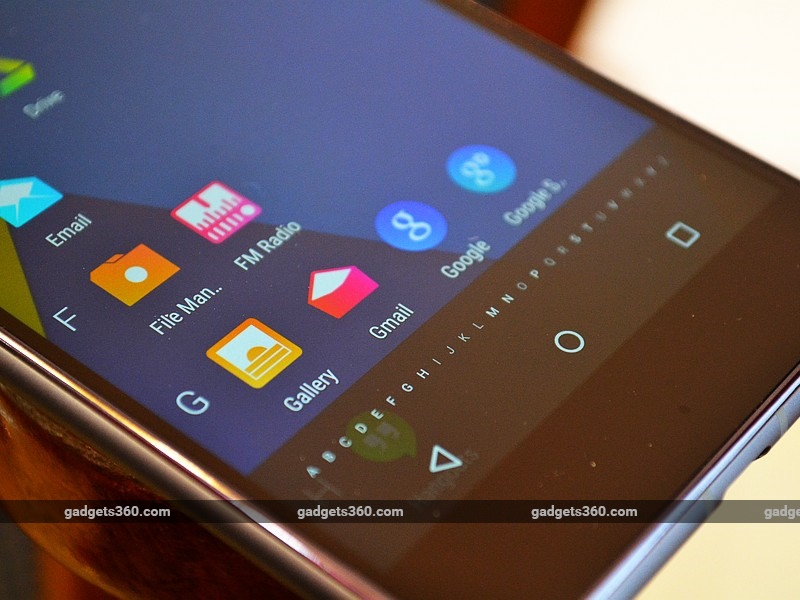 The Yutopia has a 3000mAh battery, which supports Qualcomm's Quick Charge 2.0 technology. Yu has stated that the phone battery can go from 0 to 60 percent with 30 minutes of charging. We are yet to test the battery life of the Yutopia so stay tuned for our complete review.

The fingerprint sensor was not very impressive. It will take around 15 taps on the sensor to set up a fingerprint to be recognised, but even after this process the phone often refuses to unlock itself. We eventually found it easier to use the old pattern lock mechanism instead. The speakers on the rear sounded low and flat, and were often muffled by our hands when holding the phone up to watch videos. We didn't have enough time to test audio files with the included House of Marley Little Bird in-ear earphones, which promise automatic bass management, and have 9.2mm drivers. These headphones come with every unit. 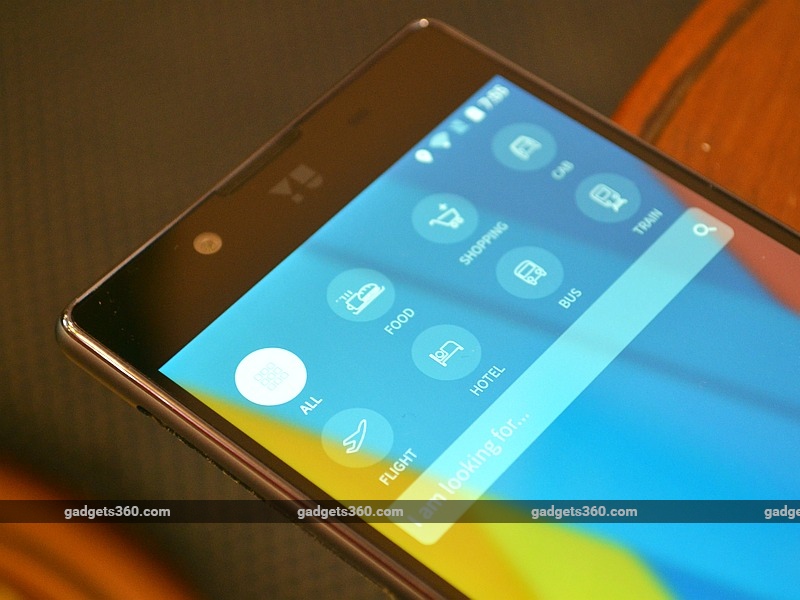 The Yutopia also comes with its own brand-new app service platform called Around Yu. This is designed to provide one-tap access to services such as ordering food, booking flights, hotels, taxis, shopping and more. The focus here is to create one single platform for all services instead of having to download multiple apps such as Foodpanda, Flipkart, Ola, Oyo Rooms and more, which all occupy storage space. Around Yu can be accessed by swiping right from the first homescreen. Ola, Zomato, ixigo and other partners are currently available through this service.

The Yutopia is Yu's most powerful smartphone to date, and has impressed us in some departments but fallen a bit flat in others as well. However, with its metal unibody design, QHD display, Qualcomm Snapdragon 810 processor and 4GB DDR4 RAM, this phone might still prove to be very popular. It will be competing directly against the OnePlus 2 and Moto X Style in terms of specifications, but costs a little less. So is it worth the money? Stay tuned for our full review.