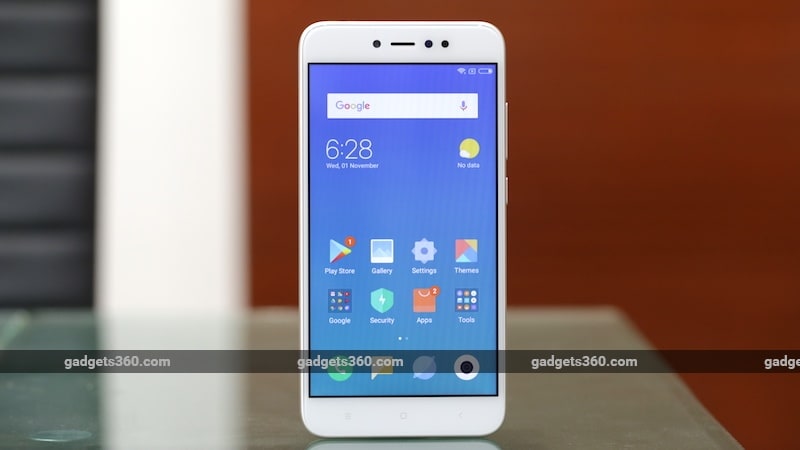 After the launch of its flagship Mi Mix series and the Android One-powered Redmi A series in India, Xiaomi has launched yet another new product line in the country. Dubbed Redmi Y, this will be a lineup of selfie-focused smartphones. The first model in the series is the Xiaomi Redmi Y1, and we got to spend some time with the device for a while prior to its official unveiling. Here are our first impressions.

The Xiaomi Redmi Y1 has the same design elements as other devices in the Redmi series. At the front is a 5.5-inch HD display with Corning Gorilla Glass protection, and non-backlit capacitive touch buttons for Android navigation.The highlight of the Redmi Y1 is its 16-megapixel selfie shooter which gets a diffused selfie flash. At the back, there's a 13-megapixel camera with a single-LED flash, and a fingerprint scanner positioned in the centre. The fingerprint scanner is easy to reach, and it unlocked the phone every single time without any hiccups. Unlike the current Xiaomi Redmi 4 and Redmi Note 4, this new phone does not have a metal unibody. Instead, it has a plastic back panel, the power and volume buttons are on the right, and are also made of plastic.

There's a Micro-USB port at the bottom with grilles on either side, while the top has the 3.5mm headphone socket, an IR emitter, and the secondary microphone. We found the Redmi Y1 to be well built. Weighing in at 153 grams, it did not feel uncomfortable to hold. The SIM tray has two Nano-SIM slots and a dedicated microSD slot, which is a welcome feature. The Redmi Y1 will be available in two colours, Gold and Dark Gray, for you to choose from.

Xiaomi has picked the Snapdragon 435 SoC to power the Redmi Y1, and has paired it with 3GB of RAM. It is the same combination of processor and RAM currently powering the Redmi 4. There is 32GB of inbuilt storage which is expandable by up to 128GB using the microSD card slot. To keep the phone going, it is equipped with a non-removable 3000mAh battery, and Xiaomi has provided a 10W charger which should be able to top it up quickly.

The phone runs on Android 7.1 Nougat with Xiaomi’s custom MIUI 9 Beta on top. We found the new UI easy to use, and the phone seems as though it should be able to deliver a good experience without lags or stuttering.

It looks like Xiaomi wants to cash in on the selfie craze with its new Redmi Y1. This phone has a proven processor and a good setup for selfies in most conditions. If you are looking for a good selfie phone on a budget, you might want to add the Redmi Y1 to your shortlist. Stay tuned to Gadgets 360 for our full review of the Xiaomi Redmi Y1.

We spoke about the Xiaomi Redmi Y1 and MIUI 9, on on our weekly technology podcast Orbital, which you can subscribe to via Apple Podcasts or RSS or just listen to this episode by hitting the play button below.