The Redmi Note 8 is here to attack the sub-Rs. 10,000 market with a long list of specifications and capabilities 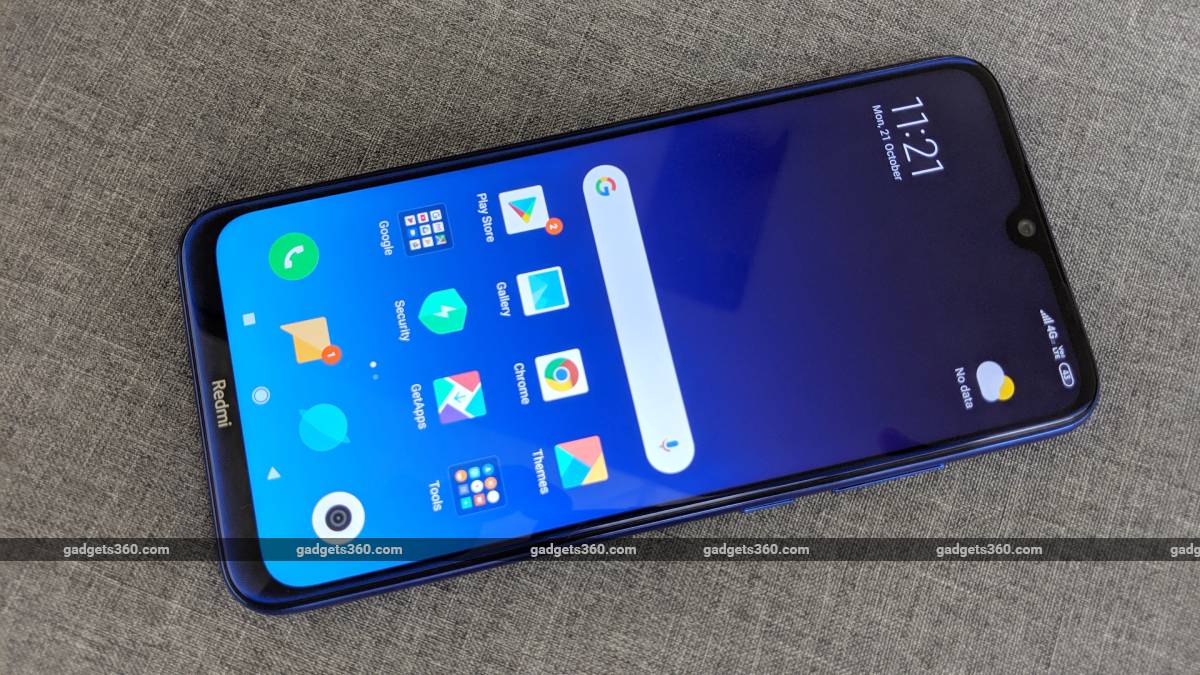 Redmi Note 8 has been launched in India starting at a price of Rs. 9,999

Just as we were all waiting for the Redmi Note 8 Pro (Review) to be unveiled, Xiaomi snuck the Redmi Note 8 in completely under the radar. This lower-priced model has been designed to attack the Rs. 9,999 sweet spot, and does so with strong specifications in typical Xiaomi fashion. Slotting in above the Redmi 8 (Review) but below the Redmi Note 8 Pro, we're eager to see where the Chinese giant has found its middle ground, and whether this phone offers the best balance of cost, features, and performance.

The first thing we noticed about the Redmi Note 8 is that it doesn't fit in with the design style that Xiaomi has come up with for the rest of the current generation lineup, like the Redmi 8 and Redmi Note 8 Pro. The front has a waterdrop notch, and in what we consider a strange touch, our Neptune Blue demo unit had a streak of blue running around the screen on all sides except the top. We found this distracting, and frankly, not at all appealing. We hope that the Space Black and Moonlight White options look more sober in person.

There's a fairly thick chin below the 6.3-inch screen with a silver Redmi logo, and a waterdrop notch at the top. A tiny white notification LED lights up to the left of the single front camera when needed. Xiaomi says it has used Corning Gorilla Glass 5 on the front and rear of this phone.

Unlike the simple, solid finish of the Redmi 8, Xiaomi has gone full-tilt here with gradient and diffractive patterns. The rear of our Neptune Blue unit was greenish-blue at the top and almost completely purple at the bottom, and it caught the light as we tilted it in our hands.

Also unlike all its siblings, the Redmi Note 8 has a vertical camera strip in the upper left corner of the rear, and it sticks out quite a bit. If you find this uncomfortable, the clear plastic case that you get in the box might help. There's also a small fingerprint sensor in the middle of the rear.

Weight is relatively manageable at 188g, and this phone is 8.35mm thick. It's comfortable enough to hold in one hand and use. The rear picks up smudges like crazy, but it isn't very slippery. The phone boasts of a P2i water repellent coating which is a nice touch.

We have Xiaomi's trademark IR emitter on the top, and a USB Type-C port, 3.5mm audio socket, and speaker on the bottom. The tray on the left can take two Nano-SIMs as well as a microSD card of up to 512GB. The power and volume buttons are on the right.

The Redmi Note 8 will be available in Neptune Blue, Moonlight White, and Space Black

Xiaomi has done a good enough job with the 6.3-inch full-HD 1080x2280 display. Colours don't really pop, and this phone doesn't have HDR like its premium sibling, the Redmi Note 8 Pro, but considering that this is a low-cost phone, we liked how crisp and smooth it seemed.

MIUI 10 has a lot of bloatware, and the initial setup process tried to guide us into downloading even more, as well as allowing promotional content on the lock screen. We didn't have to deal with a lot of ads and notifications in our brief time with this phone, but we suspect that they'll start popping up as we use the phone and launch more of the preinstalled apps.

Still, the Redmi Note 8 felt pretty snappy to us, and we had no trouble getting around the UI. We hope that this phone will be able to run today's popular games such as PUBG Mobile smoothly, but trying that for ourselves will have to wait for our full review.

On the inside, the Redmi Note 8 gets a Qualcomm Snapdragon 665 processor, which matches what the Vivo U10 (Review) and Realme 5 (Review) offer at roughly the same price level. However, Xiaomi has declared that it won't sell this phone with less than 4GB of RAM and 64GB of storage, which is the base variant priced at Rs. 9,999. There's another variant, which we have with us, and it features 6GB of RAM with 128GB of storage, but is priced considerably higher at Rs. 12,999.

This phone also features a 4000mAh battery, plus support for 18W fast charging. An 18W charger is included in the retail box, unlike with the lower priced Redmi 8 (Review). We'll have a full Redmi Note 8 review up soon, in which we'll test battery life with real-world usage and continuous HD video playback.

Of course the four rear cameras are important too. The main one has a 48-megapixel resolution and f/1.79 aperture. It can record 4K video with electronic image stabilisation. Next, there's an 8-megapixel ultra-wide camera with a 120 degree field of view, followed by a 2-megapixel macro camera and a 2-megapixel depth sensor. We've tested other phones with low-resolution macro cameras, and we think that while this will be a selling point it's still essentially a novelty. For selfies, the Redmi Note 8 has a 13-megapixel f/2 front-facing camera as well.

Overall, it seems as though Xiaomi has done what it needs to do in terms of matching or exceeding the specifications that the competition offers for less than Rs. 10,000. However, real-world performance remains to be seen. The more premium variant that we're reviewing will of course have stronger competitors to fend off. Do stay tuned to Gadgets 360, as the full review of the Redmi Note 8 is coming up very soon.