Is the Mi A3 really an upgrade over the Mi A2? 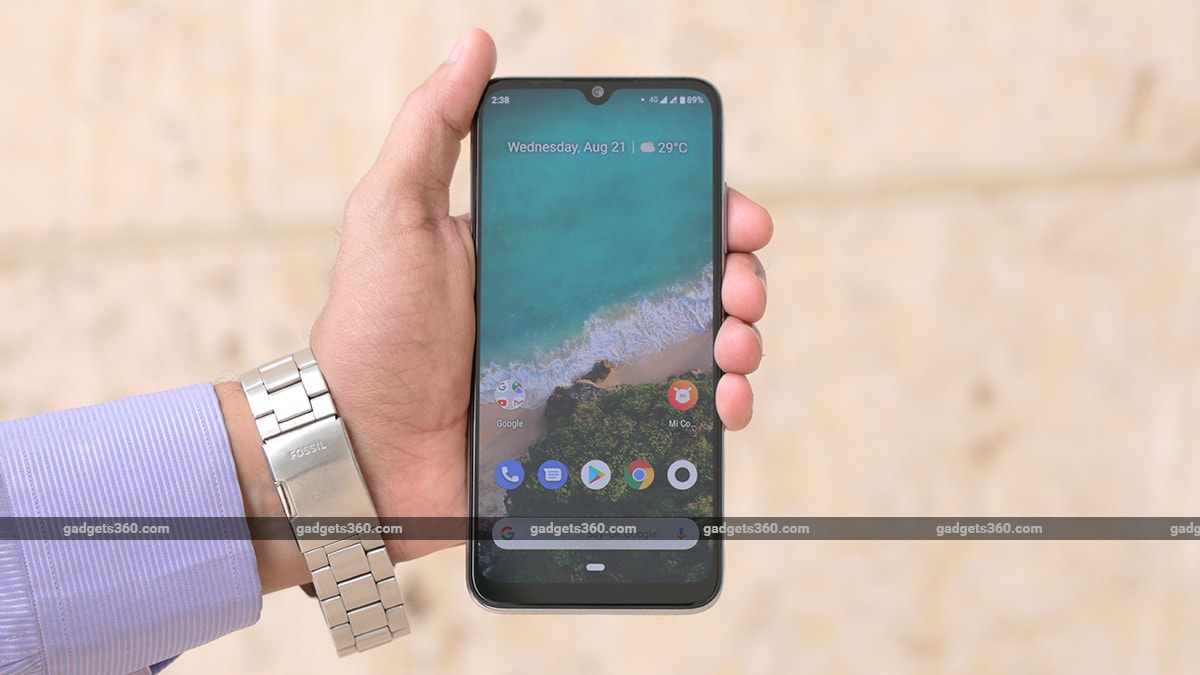 The Mi A1 (Review) was the first smartphone from Xiaomi to be a part of Google's Android One programme. It had powerful hardware for the price like most other Xiaomi smartphones, but ran stock Android instead of Xiaomi's own MIUI. While the device did not generate the same amount of buzz as its Redmi siblings, it did find some takers. Xiaomi launched a successor a year later in the form of the Mi A2 (Review). While Xiaomi Mi A2 was arguably one of the best camera smartphones in the sub-Rs. 20,000 segment at the time, it had a few shortcomings. It lacked a 3.5mm headphone jack, and storage wasn't expandable. Xiaomi has now launched a successor to the Mi A2, aptly called the Mi A3. This new model makes up for the shortcomings of the Mi A2, but has Xiaomi skimped on anything else? We review the Mi A3 to find out.

The Xiaomi Mi A3 has a glass sandwich design, a change compared to the metal-clad Mi A2. There is Corning Gorilla Glass 5 at the front and back, as well as on the camera module, which should help the device resist scratches from day-to-day usage to some extent. The screen has a dewdrop notch at the top which houses the selfie camera. The Mi A3 has thin bezels on the sides, but the ones at the top and the bottom are relatively thicker.

Xiaomi has opted for a plastic frame on the Mi A3 which was finished in chrome on our More Than White unit. The Mi A3 is also available in Kind Of Grey and Not Just Blue, and the colour names do seem inspired from Google's choices for its Pixel phone lineup. At the top, it has a 3.5mm headphone jack, secondary microphone, and an IR emitter which can be used to control IR-based appliances.

The Mi A3 has a triple camera setup at the back

The Mi A3 has a USB Type-C port at the bottom with two grilles, though only the one on the right is a loudspeaker. Xiaomi has positioned the power and volume buttons on the right side, and these are easy to reach. The hybrid dual-SIM tray is on the left side of the device.

Xiaomi offers a triple camera setup at the back, along with a single-LED flash. The Mi A3 does not have a Mi A2-like rear-mounted fingerprint scanner since it sports an in-display one instead.

Xiaomi Mi A3 specifications and software

The competition in the sub Rs.15,000 segment keeps getting fiercer, and so manufacturers are shipping smartphones with the best possible hardware. We already have phones such as the Redmi Note 7 Pro (Review) and the Vivo Z1 Pro (Review) in this segment, powered by the Qualcomm Snapdragon 675 and Snapdragon 712 SoCs respectively.

The Mi A3 is a part of Google's Android One Programme

One thing that came as a surprise to us was the HD+ display on the Mi A3. This phone's predecessors, the Mi A1, and Mi A2, both sported full HD+ panels. Yes, the Mi A3 uses an AMOLED panel compared to the LCD ones on the older models, but you can see pixelation while reading text on the Mi A3 because its density is less than 300 pixels per inch. We did not find any way to adjust the screen's colour output, which we found to be boosted too much for our liking. The panel has adequate brightness and is legible outdoors but at times it wasn't easy to view it under direct sunlight.

The Mi A3 packs in a 4,030mAh battery which is bigger than the 3,000mAh unit in the Mi A2. This phone supports 18W fast charging, but Xiaomi only ships a 10W charger in the box. The Mi A3 also supports Bluetooth 5, dual-band Wi-Fi, , dual 4G VoLTE, and four satellite navigation systems.

Since the Mi A3 is a part of the Android One programme, it runs stock Android instead of MIUI. There is no bloatware preinstalled, which means no spammy notifications. There is a Mi Community app, along with a few Google apps. There is no app to use the IR emitter with, so you will have to download one yourself. If you like stock Android, the Mi A3 delivers just that. You'll also get the Digital Wellbeing feature. The Mi A3 will receive major Android OS updates for two years, and security updates for three years.

While using the Mi A3, we did not face any lags or stuttering, and the Snapdragon 665 SoC in this phone could run apps without any issues. We had the 6GB RAM variant of the Mi A3 in for review and we could multitask easily without having to kill apps in the background. Apps loaded without any fuss too. The in-display fingerprint scanner is positioned slightly lower on the Mi A3 compared to some of the other smartphones with the same technology. However, it isn't inconvenient and is not slow to unlock the smartphone.

We ran our usual set of benchmarks to figure out where the Mi A3 fits compared to the many recently launched smartphones at the same price level. In AnTuTu, it managed to score 141,132 points, and Geekbench 4's single-core and multi-core tests gave us 1,504 and 5,386 points respectively. It managed 51fps and 13fps in GFXBench T-Rex and CarChase respectively.

These scores are in the same range as those of the Realme 5 (Review). When we compared these scores with those of the Redmi Note 7S (Review) (powered by the Qualcomm Snapdragon 660) we found that the Mi A3 scored slightly worse in CPU tests but had a lead in the GFXBench tests which could be because of the low-resolution display.

Xiaomi Mi A3 gets a 3.5mm headphone jack which was missing on the Mi A2

PUBG Mobile defaulted to the low quality preset with the graphics set to Smooth and frame rate set to Medium. We bumped the graphics quality up to Balanced, and the Mi A3 could still play the game without any stutter or lag. After playing the game for 30 minutes, we noticed that the smartphone was slightly warm to the touch, and had registered a 10 percent battery drop.

The Mi A3 delivers good battery life compared to the Mi A2. In our HD video loop test, the Mi A3 went on for 16 hours and 21 minutes. With our regular usage, which consisted of running all benchmarks, taking photos and videos, and using an active WhatsApp account, each full charge lasted us about a day and a half. The supplied 10W charger managed to take the Mi A3 to 27 percent in 30 minutes, and to 54 percent in an hour. We would recommend that you invest in an 18W fast charger if you wish to speed this up.

The Xiaomi Mi A2 offered good cameras for the price, and naturally, people are expecting the Mi A3 to fill its shoes. Xiaomi has gone with a triple camera setup on the Mi A3. There's a 48-megapixel Sony IMX 586 sensor for the primary camera, and an 8-megapixel secondary camera with a wide-angle lens with a 118 degree field-of-view. The third one is a 2-megapixel depth sensor. The Sony IMX586 sensor is also found in premium phones such as the OnePlus 7 (Review) and Redmi K20 Pro (Review). For selfies, the Mi A3 has a 32-megapixel front shooter.

Camera software on the Mi A3 isn't very different from what we've seen on Redmi smartphones which run MIUI. The Mi A3's camera app has multiple shooting modes including Portrait, Night, Panorama, and Pro, apart from the usual photo and video modes. It also has quick toggles for HDR, AI, the flash, and filters. There is a 48-megapixel mode that lets you take photos at the sensor's full resolution, but the regular photo mode returns 12-megapixel pixel-binned shots for better clarity.

Photos taken in daylight had good details. The phone managed to lock focus quickly and set the exposure right. Objects at a distance were recognisable, and text at a distance was also legible. However, the Mi A3 does not do HDR very well, lifting blacks a bit too aggressively. This throws the contrast of photos off, causing them to look artificial. The wide-angle sensor helps capture wider frames but you lose out on detail when compared to shots taken with the primary sensor.

Taking macro shots using the Mi A3 wasn't easy, as it was slow to focus and occasionally needed us to move away from the subject in order to lock focus. When the Mi A3 does manage that, it takes very good shots. It managed good separation between the subject and the background, and reproduced details well. Portrait mode lets you adjust the level of background blur before you take a shot. The phone managed good edge detection and accurate colours in this mode.

In low light, the Mi A3 delivers good shots as long as you are patient. It locks focus quickly but is a little slow to capture the image. It took slightly longer to take a shot than we anticipated, sometimes resulting in motion blur. We had to stay perfectly still for a while after hitting the shutter button to ensure that the image was sharp. Low-light shots had good detail, and noise was under control. Switching the Mi A3 to night mode resulted in brighter images with better details.

Selfies taken outdoors had good detail and the subjects were correctly exposed. The app has a Beautify mode which can be enabled before taking a shot. For selfie portraits, the phone managed good edge detection and did give us the option to set the level of blur. In low light, we had to keep the phone steady longer than we usually do to ensure a sharp shot. Selfies taken in low light had good detail and were well exposed.

Two steps forward, one step back, is the best way to describe Xiaomi's strategy with the Mi A3. The company did bring back the 3.5mm headphone jack and expandable storage, but dropped the screen resolution down to HD+. The new Qualcomm Snapdragon 665 is a capable processor and delivers good performance for the price. The Mi A3 also benefits from a bigger battery, and is capable of lasting on longer than its predecessor on a single charge. Camera performance is quite strong for a phone at this price level, helping it stand out.

At its starting price of Rs. 12,999 the low-end variant of the Mi A3 does not offer the same great value for money as some other smartphones. The Realme 5 (Review) offers the same processor starting at Rs. 9,999. If performance ranks higher than photo quality for you, Xiaomi's own Redmi Note 7 Pro (Review) with the more powerful Snapdragon 675 SoC is within reach at Rs. 13,999.

The higher-end variant of the Mi A3 priced at Rs. 15,999 isn't very appealing, as the Realme 5 Pro variant with 8GB of RAM and 128GB of storage is priced at Rs. 16,999. Realme's offering seems interesting based on our first impressions of it, and we'll have more information in our full review of this phone, so stay tuned to Gadgets 360.

The Xiaomi Mi A3 will only appeal to people who really value the stock Android experience and software updates, and who want good camera performance, without breaking the bank. For that specific target audience, the Mi A3 is currently the best option there is in the market.