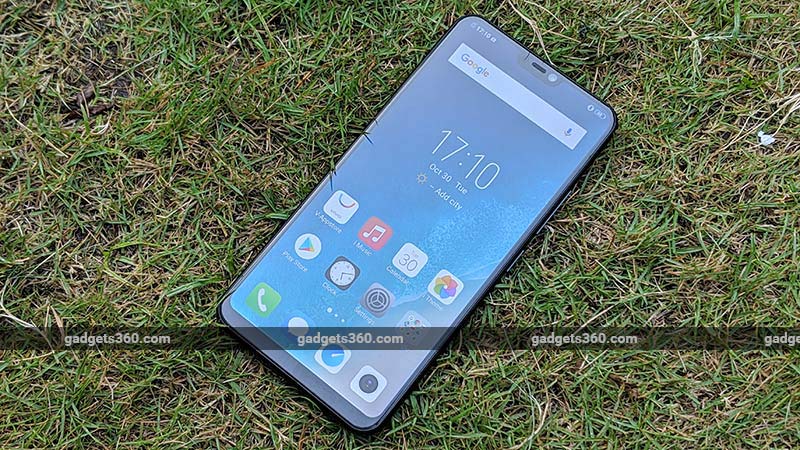 When the Vivo V9 was launched in India, it was the first Android device to sport a notch. It was powered by the Qualcomm Snapdragon 626 SoC and had 4GB of RAM, and we felt that it was relatively powerful when we reviewed it. Soon after, we saw far better phones being launched at around the Rs. 20,000 mark, which made the Vivo V9 look overpriced for what it had to offer.

The Xiaomi Mi A2 (Review), for instance, offered a powerful Snapdragon 660 processor at just Rs. 16,999 and the Poco F1 (Review) was a powerhouse starting at Rs. 20,999. Vivo felt the heat and dropped the price of the Vivo V9 (Review) to stay relevant. Now, with even more competition in the market, Vivo has dropped the Vivo V9 Pro, which packs in better hardware and is still comparatively affordable at Rs. 17,990. Does the bump in hardware make it a better package? We take a look to find out.

The Vivo V9 Pro could pass off for the V9, because visually, these two are identical. It is slim and the curved sides make it easy to hold. Just like the V9, the Vivo V9 Pro has a notch at the top of the display which houses the earpiece, sensors, notification LED, and selfie camera. The notch is compact and liberates a lot of screen real estate on either side. The 6.3-inch display has thin bezels all around except the bottom where it is comparatively thicker. Vivo has managed to keep the weight under control, and the device weighs just 150g.

At the bottom, it has a 3.5mm headphone jack, a Micro-USB port, and a loudspeaker grille. In the time that we spent with the Vivo V9 Pro, we weren't happy with the headphone jack placement as it would come in the way while playing games in landscape mode. The top of the phone is bare. Vivo has positioned the power and the volume buttons on the right of the device, and they are easy to reach. The left side of the device only has the SIM tray which has dual Nano-SIM slots and a dedicated microSD card slot.

The 6.3-inch IPS display has thin bezels around the edges

The Vivo V9 Pro has a dual camera setup at the back along with a single-LED flash and a fingerprint scanner. While most other smartphones in this price range use premium materials in their construction, Vivo uses plastic. The V9 Pro is available in Black and Nebula Purple colour options, and we had the Black variant for review. To give it a rich look, the camera module rim, fingerprint scanner, and the Vivo logo have a golden highlight. The phone has a pre-applied screen protector and you get a transparent case in the box. Vivo also ships a 10W charger and a pair of earphones in the box.

The main thing differentiating the V9 Pro from the non-Pro model is its octa-core Snapdragon 660 processor. Vivo has opted for a more powerful chip and has paired it with 6GB of RAM. You get 64GB of internal storage which is expandable by up to 256GB. The 6.3-inch IPS display has a full-HD+ resolution. It has good viewing angles and can get bright enough when outdoors.

While the more powerful processor is an obvious upgrade, there are a few other changes. Vivo has opted for a 13-megapixel + 2-megapixel camera combination instead of the 16-megapixel + 5-megapixel shooters on the Vivo V9, which is a surprising reduction. Similarly, the selfie camera too has a 16-megapixel sensor instead of the 24-megapixel sensor on the V9. In terms of connectivity, there is support for Bluetooth 5.0, dual-band Wi-Fi, GPS, GLONASS, USB-OTG, and FM radio. There is support for 4G as well as VoLTE on both SIMs.

The notch on the V9 Pro houses the earpiece, sensors and the selfie camera

Vivo ships the V9 Pro with Android 8.1 Oreo and its custom Funtouch OS 4 on top. Our review unit was running the September security patch which is fairly recent. Funtouch OS is designed to mimic iOS and uses similar icons to pull off that look. However, there is support for themes that let you completely change the way the UI looks. Vivo has also thrown in gesture navigation so you can swipe to navigate instead of using the three traditional Android UI buttons. A swipe up from the bottom of the screen gives you access to the Control Center which houses all the quick settings shortcuts. For notifications, you still need to swipe down from the top of the screen.

Face Unlock uses the selfie camera to scan your face and unlock the smartphone. It is as quick as the fingerprint scanner if not quicker to unlock the smartphone. If you wish, you can also lock down apps and games using either the fingerprint scanner or Face Unlock. There are more customisations, such as Motorbike Mode which automatically rejects incoming calls and sends an SMS to the caller. The App Clone feature is similar to Dual Apps, letting you run two instances of supported apps. It also has a gaming mode which is similar to what we found on the Vivo V9, which you can read all about it in our Vivo V9 review.

While there are a lot of features, you also get a fair amount of preinstalled bloatware. You'll find Vivo apps called V-Appstore, i Manager, Weather, and Easyshare, along with NewsPoint, UC Browser, WPS Office, Amazon, Facebook, PhonePe, and Google apps. We found NewsPoint to be a little spammy as it kept sending notifications. You can uninstall most of these apps to stop them from bothering you, and also reclaim some storage space.

The Vivo V9 Pro packs in a powerful processor, and it is evident when you use the phone. There is no hint of lag or stutter when going through the menus or while multitasking. Large apps and games are quick to load and you can still multitask with them in the background thanks to the 6GB of RAM.

We put the V9 Pro through our usual benchmark tests and it managed to score 129,190 in AnTuTu as well as 1448 and 5486 in Geekbench's single-core and multi-core tests respectively. Graphics benchmark performance was good, and the phone managed to score 41fps and 7.1fps in GFXBench's T-Rex and Car Chase tests respectively. It scored 1855 in 3DMark Slingshot and maxed out in Ice Storm Extreme.

The dual camera setup on the Vivo V9 Pro

In our HD video loop battery test, the smartphone managed to go on for 10 hours and 8 minutes. The phone ran PUBG at medium settings and did not get hot when we were playing the game in an air-conditioned room. The battery drain was low while gaming, allowing us to play multiple rounds before needing to plug in the charger. With our usage consisting of an active WhatsApp account, about an hour and a half of navigation using Google Maps, 30 minutes of PUBG Mobile, and a few of our benchmark tests over the course of a day, the phone displayed the power saving pop-up at 9pm. With lighter usage you should be able to go beyond a day.

The camera app is similar to what we have seen on other Vivo smartphones. You get toggles for HDR, Portrait, and Live Photo modes. You can switch to Panorama mode or a Professional mode that lets you control the exposure, ISO, shutter speed, white balance, and autofocus. Beautification is available for both the primary and the selfie camera.

Vivo has dropped the resolution of the cameras on the V9 Pro, which looks like a move to offset the cost of the processor upgrade. Photos taken with the Vivo V9 Pro were a hit-and-miss. In daylight, it managed to set the exposure right and focus where we wanted it to. Photos appeared good as is, but zooming in revealed a loss in details. Macros had good detail but it did take time to focus where we wanted. While shooting portraits, we found edge detection to be unreliable. In some instances, the V9 Pro didn't blur the gap between a person's arm and body.

Low-light camera performance was below average, and while this phone managed to keep noise under control, the output was quite grainy. The V9 Pro takes good selfies and uses a screen flash in unfavourable light. Portrait mode is also available for the selfie camera and has good edge detection.

Video recording on the V9 Pro maxes out at 1080p for both the primary and the selfie camera. This is surprising considering that the V9 could record video at 4K. There is no video stabilisation which results in shaky footage. We found that beautification mode can be enabled while recording a video as well as on video calls in compatible apps. Other than the lack of 4K video recording, the drop in camera resolutions has not had a significant impact on the quality of photos and videos compared to the Vivo V9.

Verdict
Vivo has priced the V9 Pro better than some of its other offerings, including the Vivo V9. The Vivo V9 Pro has a more powerful processor and more RAM compared to the previous model. Unfortunately, in order to keep costs low, it opted for different camera sensors, but thankfully this has not had much effect on photo quality. Priced at Rs. 17,990, the Vivo V9 Pro is actually less expensive than the Vivo V9 (Review), which is still listed at Rs. 18,990. That makes it easy to recommend the new model over the older one.