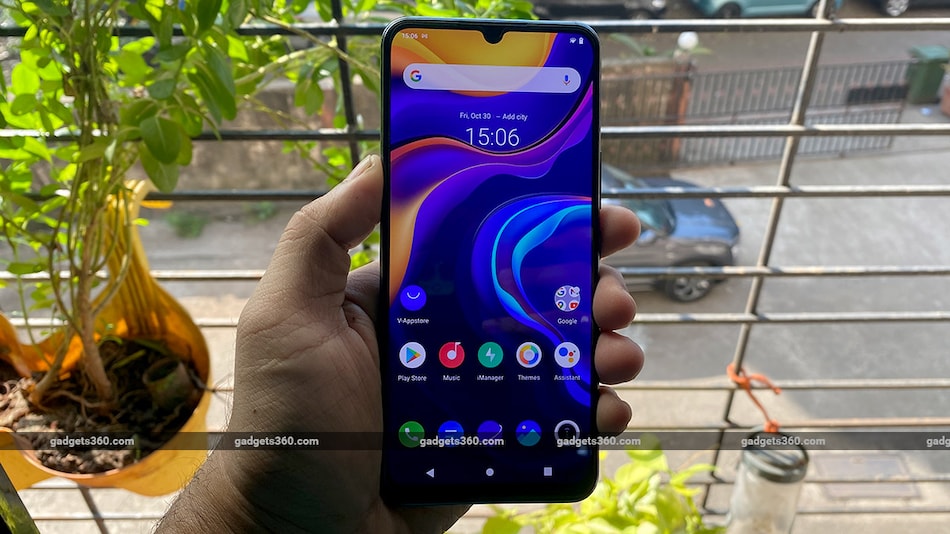 The Vivo V20 SE has a crisp AMOLED display

Vivo recently launched the V20, a sleek, design-focused smartphone running Android 11. Hot on its tail, the company has now launched the Vivo V20 SE, a special edition of the device. Once you take a look at the specifications, you'll instantly realise that the V20 SE is positioned below the V20, and comes at a more affordable price of Rs. 20,990. I got to spend some time with the Vivo V20 SE, and here are my first impressions.

The Vivo V20 SE is a good-looking smartphone but it does not stand out like its big brother, the Vivo V20 (Review). The overall design is a little different as well. While the V20 looks inspired by the Vivo X series, the V20 SE cleary isn't. It has a plastic body just like most other smartphones at around this price.

One thing that the V20 SE shares with the Vivo V20 is its big 6.44-inch Super AMOLED display. There is a dewdrop notch at the top, which some people might prefer over a punch-hole design. Being an AMOLED display, the output is crisp, and watching content on it was engaging. This isn't a high-refresh-rate panel, and a few other smartphones such as the Poco X3 (Review) do offer that feature at this price level. I prefer an AMOLED panel over a faster refresh rate though, purely for its punchy colours. Taking advantage of the AMOLED panel, Vivo has opted for an in-display fingerprint scanner. It is convenient to hit and is quick to unlock the V20 SE.

The sides of the V20 SE are curved, making it comfortable to hold. The top and bottom are relatively flat. I really like the button placement on the V20 SE – all of them are on the right side and are easy to reach. The left side is bare, and Vivo has moved the SIM tray to the top. The tray has two Nano-SIM slots and a dedicated slot for a microSD card.

Vivo offers the V20 SE in two colours, Aquamarine Green and Gravity Black, and I have the latter with me. The back is super glossy and picks up fingerprints very easily. Vivo does include a case in the box which is helpful. There are three cameras on the back, and the module reminds me of the Oppo Reno 4 and Galaxy Note 20.

Let's talk specifications. The Vivo V20 SE is powered by the Qualcomm Snapdragon 665 SoC. The choice of processor is a little surprising since I have seen it powering smartphones that are considerably less expensive than the V20 SE. Vivo has gone with 8GB of RAM which should give this phone an edge when it comes to running heavy tasks and multitasking. There is 128GB of storage, and you don't get a choice in terms of other variants. Storage is expandable by up to 1TB.

Vivo supplies a 33W FlashCharge charger in the box

The V20 SE packs in a 4,100mAh battery which is a little smaller than what you get on many of the other smartphones currently available at this price level. Vivo has bundled a 33W FlashCharge charger which should be able to top the battery up very quickly. Connectivity options on the Vivo include Bluetooth 5, dual-band Wi-Fi, and four navigation systems.

In terms of software, it runs FuntouchOS 11 just like the Vivo V20, but there is a catch here. The V20 SE runs Android 10 and not Android 11, although Vivo has promised to roll out a software update to Android 11 soon.

The UI is very similar to what I saw on the Vivo V20 and I did not have any issues finding my way around. There is a fair amount of bloatware preinstalled on this smartphone and I could spot Facebook, V-Appstore, and Snapchat among others. I will be keeping an eye on these apps to see if they spam me with notifications.

On the camera front there is a 48-megapixel primary camera, an 8-megapixel ultra-wide-angle camera that is also capable of macro shots, and a 2-megapixel depth camera. The hardware is a bit of a downgrade compared to the Vivo V20, which had a 64-megapixel primary sensor. The V-series is known for its selfies, and the V20 SE packs a 32-megapixel selfie camera which seems to be good for the price.

I will be doing a detailed review of the Vivo V20 SE to see how the processor fares under load and whether the cameras are good enough for the price. Do stay tuned to Gadgets 360 for the full review.