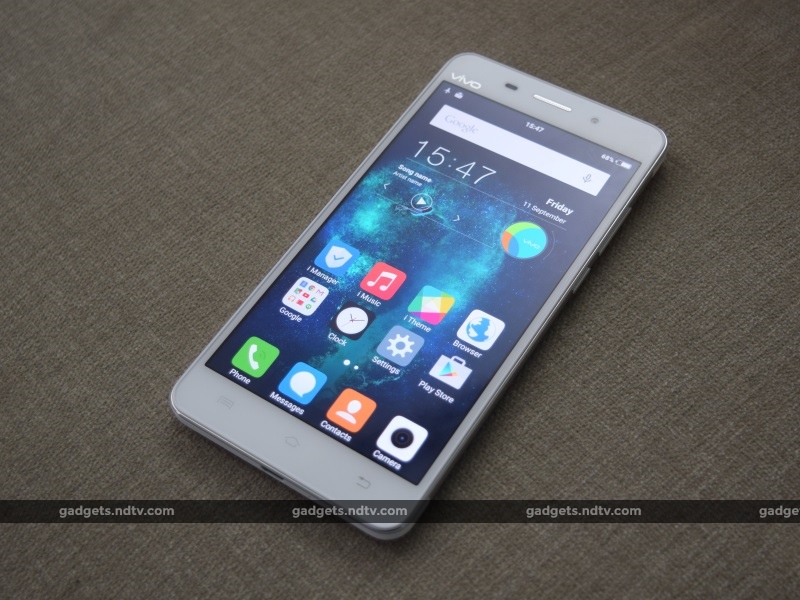 It's been nearly a year since Vivo announced its launch in India with the X5Max, and the Chinese company now has a small but growing portfolio of products. According to Vivo, a lot of attention has paid to design, and that has been visible in products such as the Vivo X5Max (Review | Pictures) and Vivo X5Pro (Review | Pictures). Although the company's products are arguably a bit too expensive for the Indian market, there is some value to the customer in terms of design and build quality.

Today, we're reviewing the Vivo V1Max, which is available for Rs. 21,980. With a specifications sheet that closely resembles those of a lot of devices available for less than Rs. 15,000, the V1Max is banking on Vivo's ability to market its premium and high-end credentials effectively. The company is also pushing this device as 'Hi-Fi', claiming better-than-usual audio performance as a major feature. However, there's something very familiar about this smartphone, and we've figured out what it is. Read on to find out. 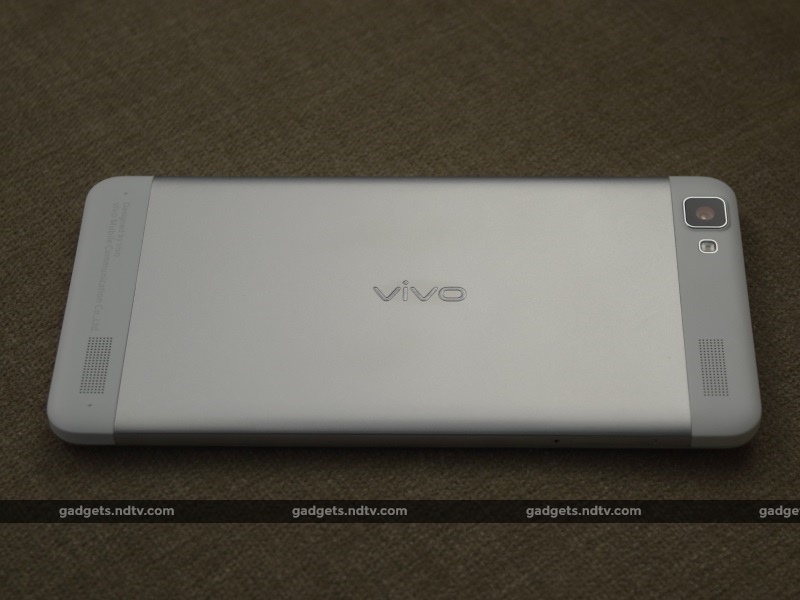 Look and feel
At the outset, the Vivo V1Max is a decent-looking device that gives us nothing to complain about. The front has no standout characteristics, instead relying on the simple formula that a vast majority of mid-range Android devices follow: soft keys at the bottom, borders of moderate thickness, and a standard shape and size.

The back of the device is neat as well, and is primarily metal. Small bands at the top and bottom are plastic, though the entire back is fixed in place and cannot be opened. The V1Max has two speakers at the rear, one on each of the plastic bands, while the camera and flash sit in the top left corner. On the whole, the V1Max bears a striking similarity to the Obi Octopus S520 (Review | Pictures) and Xolo Q1200 (Review | Pictures). This leads us to believe that this is a design shared through a Chinese OEM. 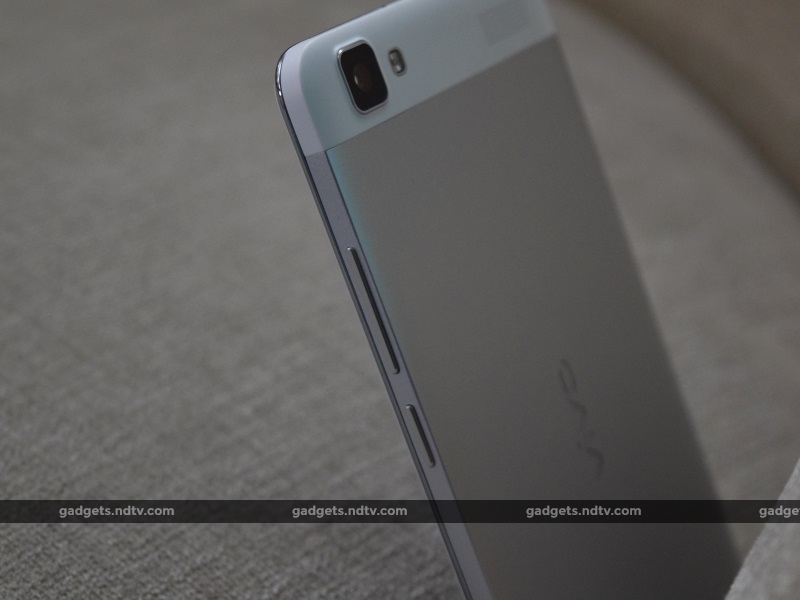 The rest of the device is fairly standard, with the power and volume keys on the right, the SIM tray on the left, the USB port at the bottom and the 3.5mm headset socket at the top. The bottom rear edges are a bit sharp, this but shouldn't get in the way of comfortable handling of the phone and general ergonomics.

The screen of the Vivo V1Max is a 5.5-inch HD (720x1280-pixel) affair. The resolution is too low for a Rs. 21,980 smartphone, considering that smartphones with full-HD screens can be purchased for less than half the asking price of the Vivo V1Max. In terms of quality though, the screen is impressive enough, with excellent colour reproduction and brightness. It's certainly among the better 720p screens we've seen. However, the low resolution definitely shows, and it simply is not competitive at this price. 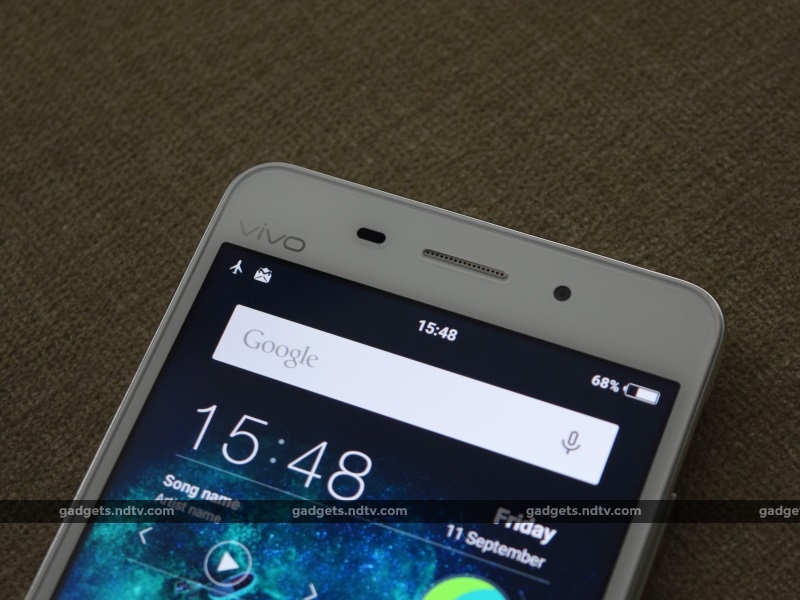 Specifications and software
A common sight in mid-range smartphones, the Qualcomm Snapdragon 615 SoC powers the Vivo V1Max. It started off as an upper-mid-range SoC but has since been finding its way onto smartphones closer to the budget end of the spectrum. Internal storage is 16GB (expandable with a microSD card by 128GB), RAM is 2GB and the phone runs on Android Lollipop. The V1Max is dual-SIM enabled, but the second SIM slot doubles up as the slot for expandable storage. Considering that internal storage is just 16GB, it's very likely that you'll need to let go of dual-SIM capabilities.

Vivo touts the V1Max as 'made for hi-fi', with above-average audio handling capabilities. Some of the features in support of this claim include a dual-speaker configuration with a boosted mid-range, an improved DAC chip, and wide media format compatibility including support for 24-bit/192KHz FLAC files. If you're used to using your smartphone as your primary music listening device, these are features that should interest you.

Vivo's FunTouch OS 2.1 user interface sits on top of Android 5.0 to power the device. Nothing has changed in the UI since we reviewed the Vivo X5Pro, and the system still bears an uncanny resemblance to iOS. With a bare minimum of bloatware, an easy-to-use interface and uncluttered, uncomplicated setup process, there's isn't much to complain about. However, the continuing lack of an app drawer and complicated settings menu mean that it isn't among the best custom UIs either. 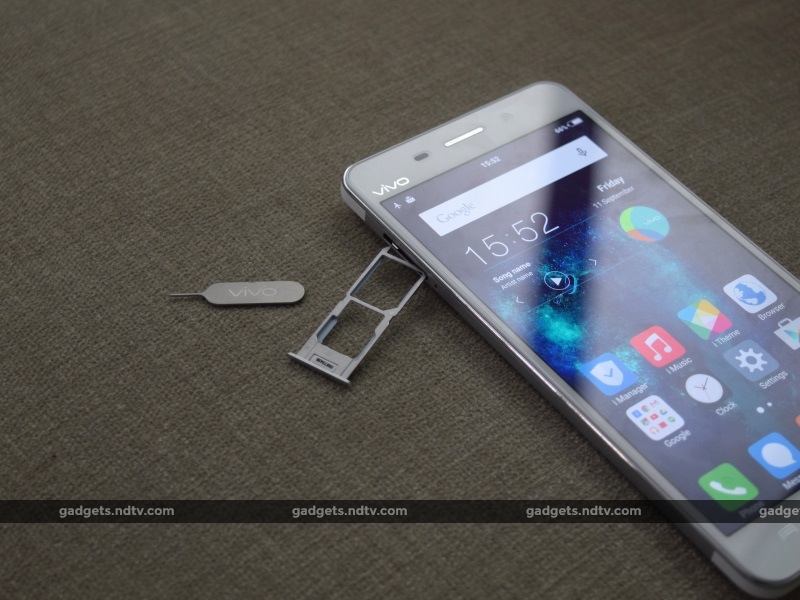 Camera
In keeping with the UI's general theme and visual feel, the camera app of the Vivo V1Max is designed to look as much like the iOS camera app as possible. This makes it a bit too simple and lacking in customisation and tweaks, but this is not necessarily a bad thing for casual users. There are fewer modes than in the Vivo X5Pro's camera app. One interesting feature is the palm activated self-timer, which starts the timer when the camera detects a palm being shown. Other important software-based features include the ability to record 1080p video with the rear camera and 720p video with the front camera, as well as a 'PPT' mode that crops and corrects shots of text for ideal visibility. 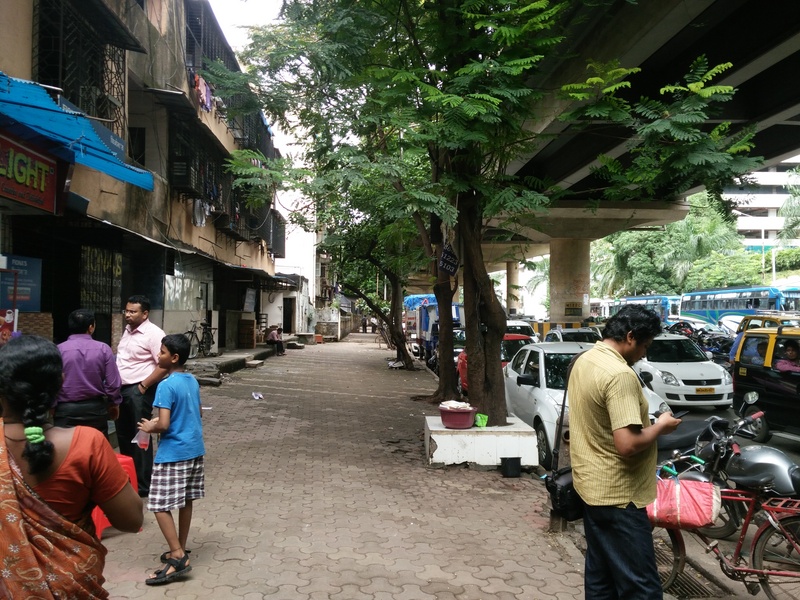 The 13-megapixel rear camera of the Vivo V1Max is a lot like the one on the Vivo X5Pro. It isn't ideal for quick shooting, as the camera needs time to focus properly and adjust to the light. A little more care than usual is required when composing shots and focusing, so it certainly isn't the quickest, most accurate camera around.

Images lack the detail and sharpness that we have seen from other 13-megapixel cameras, but shots are adequate nonetheless. Colour reproduction is good for the most part, although there are definite issues with white saturation. Close-up shots are adequate as well, suffering from the same lack of sharpness and detail when you zoom in too far. 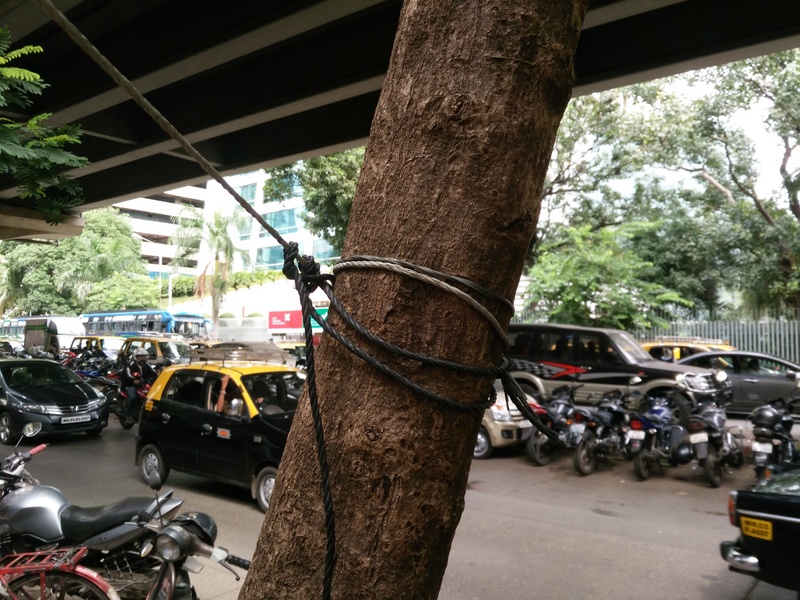 Performance
The Vivo V1Max is a consistent performer, thanks to the reliable Snapdragon 615 SoC under the hood. FunTouch OS is also a fairly efficient, capable UI that keeps the system running smoothly. However, performance is on par with what you would expect from most sub-Rs. 15,000 devices, and even some smartphones that can be bought for under Rs. 10,000.

The V1Max is usually reliable and consistent with most functions, but doesn't quite have the snappiness that could be expected from other devices that cost more than Rs. 20,000. It ran our test videos with ease, and also had no real issues with running games such as Angry Birds 2 and Dead Trigger 2. We felt minor heat buildup at the back, and slightly slow loading times with all apps during our time with the device. 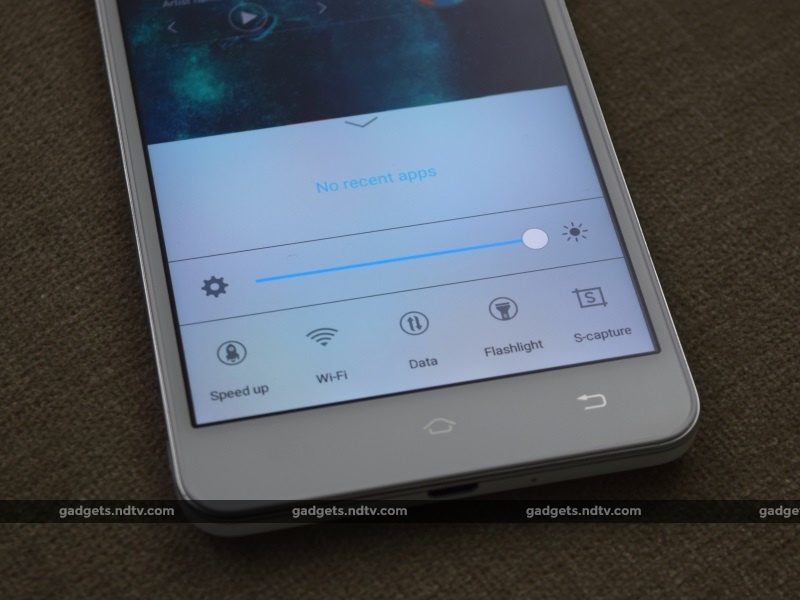 We put the phone through our usual set of benchmarks. The V1Max produced scores of 36,525 and 11,131 in AnTuTu and Quadrant. Graphical benchmarks produced higher scores than we're used to seeing on similar devices; 3D Mark and GFXBench returned scores of 8900 and 20fps respectively. Battery life is decent; the device ran for 10 hours, 20 minutes in our video loop test, which should translate to a full day's use with ease.

We paid special attention to the audio functions of the phone. The dual-speaker configuration makes for better sound, although the placement on the rear is less than ideal when watching videos. However, when playing music, the phone offers proper stereo sound that makes the occasional listening session more entertaining than what you'd get from typical mobile phone speakers. 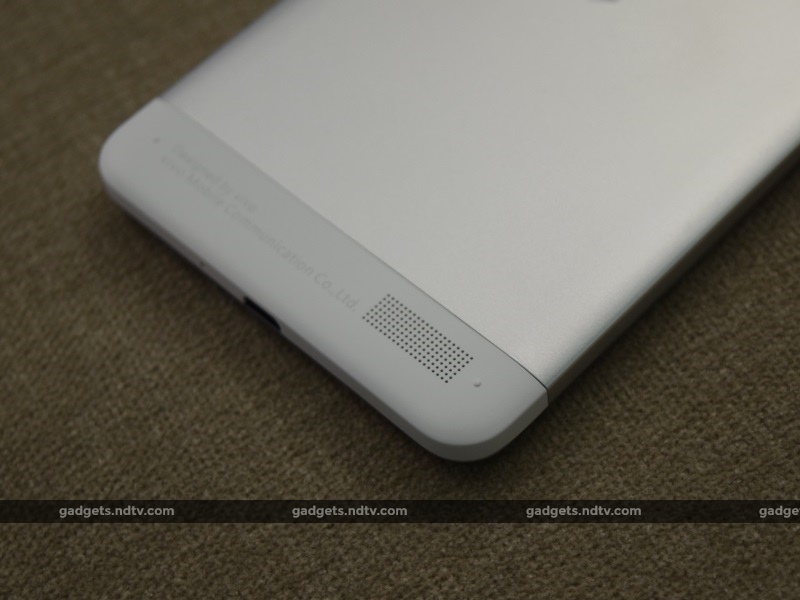 The V1Max comes with bundled earphones, which are unfortunately terrible. They sit just outside your ear canal and therefore offer no isolation of any kind. They sound inadequate as well, and you'd be much better off using a decent pair of aftermarket earphones.

When we did use aftermarket headphones, we were impressed with the quality of the sound. The improved DAC does offer better clarity and definition than we're used to with phone audio. The sound was impressive across the frequency range, offering lots of detail and enough thump and drive to make for an interesting listening session. It also plays a wide variety of formats, including 24/192 FLAC. High-resolution audio brought out the best the in the device as a media player, and we're happy to say that the V1Max lives up to its audio expectations. 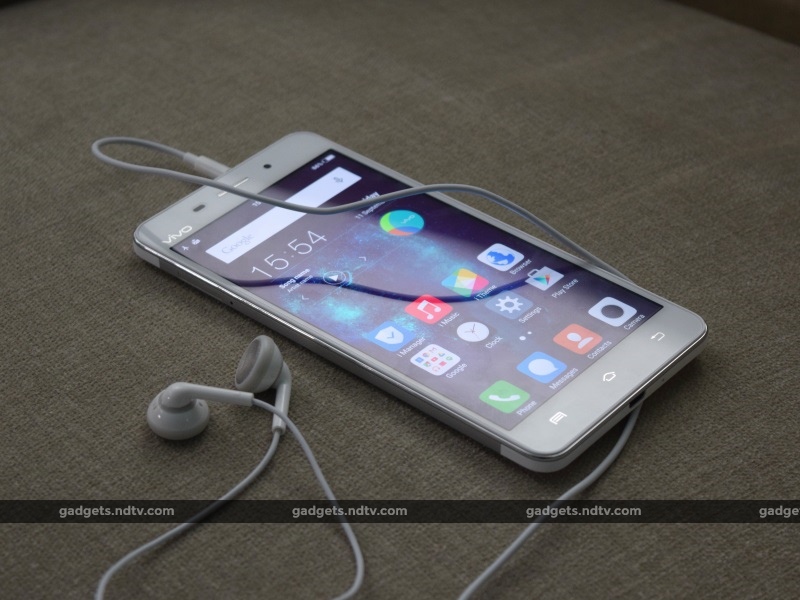 Verdict
On the whole, the Vivo V1Max is a mid-range smartphone with mid-range looks (that aren't even unique) and mid-range performance. All of this would be alright, but high pricing makes the Vivo V1Max hard to recommend over the vast majority of similarly specced devices that are much cheaper.

However, this doesn't make the Vivo V1Max a bad device by any means. It's a reliable and consistent performer which performs well with most tasks, from running apps and games to taking acceptable pictures. And it does perform better than usual as a media player, thanks to its improved sound and decent graphical capabilities. If you're looking for a mid-range device with good audio performance, the V1Max makes sense. You might have to stretch your budget a bit, but if good sound is worth it to you, then the V1Max should be considered.