The Vivo V17 has a tiny hole-punch on the display 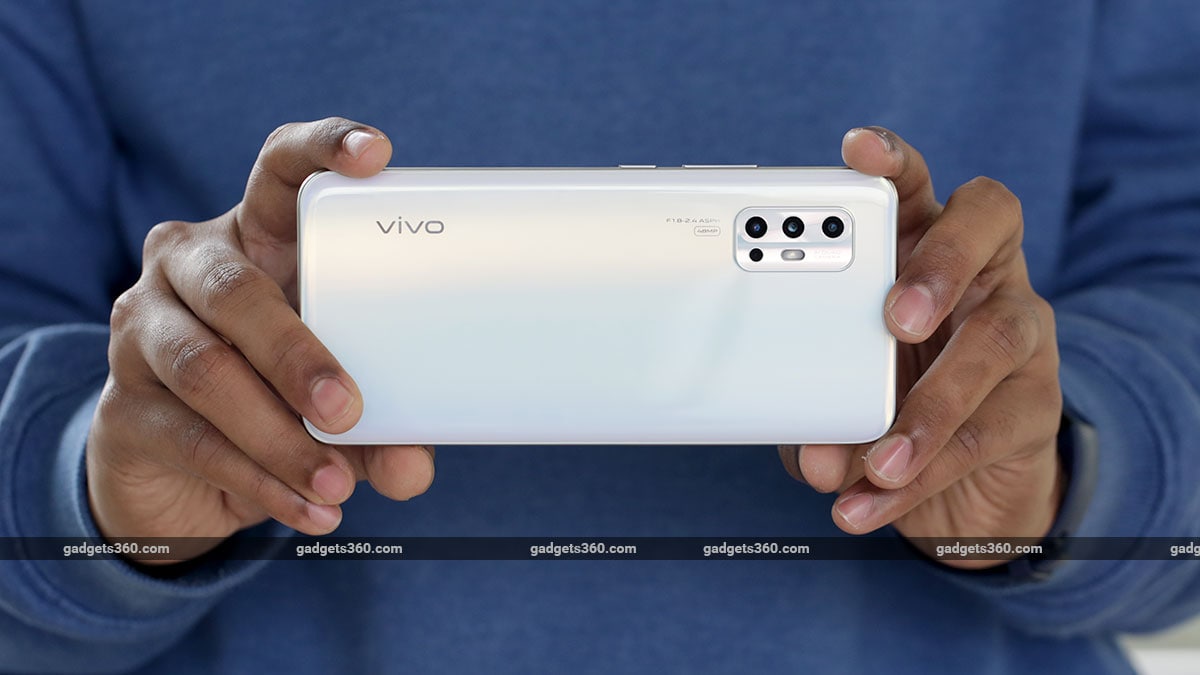 Vivo has been launching smartphones at a rapid pace in the latter half of this year. One recent launch, the Vivo U20, managed to make headlines for its price-to-performance ratio. Surprisingly Vivo has launched yet another smartphone, this time in the V-series, called the Vivo V17. You can look at this new smartphone as a lower-priced version of the Vivo V17 Pro. It lacks the dual pop-up selfie camera module and goes with a hole-punch design instead. Can it justify its Rs. 22,990 price tag in a market crowded with great low-cost devices, including some of Vivo's own? We review to find out.

The Vivo V17 looks gorgeous, especially in the Glacier Ice colour finish that we had for this review. We like that Vivo has managed to keep the bezels slim and the camera hole small. The back also packs a compact quad-camera module that doesn't take much space. We have seen a similar finish on the Realme XT (Review), which was called Lunar White. If you aren't fond of white phones, you could opt for the Midnight Ocean colour variant instead.

We like that the Vivo V17 has super slim bezels at the top and sides of the screen. Vivo has opted for a hole-punch design for this smartphone. The 6.44-inch Super AMOLED display has a full-HD+ resolution and good viewing angles, and colours are punchy too. Just like the Samsung Galaxy S10 (Review), the camera hole is positioned in the top right corner and is quite small. You will not really see the selfie camera peeping through the display very often. Yes, it does cut into content when watching videos and playing games but it wasn't big enough to bother us. This phone also has an in-display fingerprint scanner.

The Vivo V17 has a tiny hole-punch display

The V17 isn't too bulky and weighs only 176g which is nice considering that it packs in a 4,500mAh battery. Vivo also offers a USB Type-C port, something we hope to see on the company's budget smartphones as well. The USB Type-C port is flanked by the 3.5mm audio jack, microphone, and loudspeaker. At the top, it has a secondary microphone for video recording.

Vivo has used a plastic frame for this device, and the back panel also feels plasticky. All the buttons are positioned on the right and a fairly easy to reach. The SIM tray is on the left and has two Nano-SIM slots as well as a dedicated microSD card slot.

At the back, the Vivo V17 sports a quad-camera setup which is placed in a rectangular camera module. This module juts out slightly, which causes the device to rock when placed on a flat surface. We weren't too worried about the camera lenses getting scratched as the module has a metal rim around it. The back panel picks up fingerprints and smudges very easily but the Glacier Ice colour managed to hide this quite well in our experience. Vivo ships a transparent case in the box, along with a pair of in-ear headphones and an 18W fast charger.

The Vivo V17 is powered by the Qualcomm Snapdragon 675 SoC, which is surprising and disappointing. Vivo recently used the same processor to power the Vivo U20, which is priced at Rs. 10,990 – less than half as much as the V17. Vivo could have gone with at least the Snapdragon 730, which currently powers the likes of the Redmi K20.

The V17 comes in one configuration only, just like the V17 Pro. It has 8GB of RAM and 128GB of storage, though you do have the option to expand storage using a microSD card. In terms of connectivity, it has Bluetooth 5, dual-band Wi-Fi, USB-OTG support, and four GPS satellite navigation systems. The phone is also certified for Widevine L1 DRM, which lets you stream HD and higher resolution content using video streaming apps such as Netflix and Amazon Prime Video.

The Vivo V17 runs Funtouch 9.2 on top of Android Pie

In terms of software, the V17 runs Funtouch OS 9.2 on top of Android 9 Pie. The UI is very different from stock Android and could take some time getting used to. It does not have an app drawer, and all app icons are available right on the home screens. We did find a fair amount of bloatware preinstalled on this smartphone, and some of them including Helo and Dailyhunt spammed us with notifications.

Vivo has split the quick toggles from the notifications, and you need to swipe up from the bottom of the screen to get to them. We found this annoying since every other Android smartphone has the quick toggles in the notification shade which you swipe down from the top to see. Apart from this quirk, we found the overall interface to be similar to that of the Vivo U20 (Review) and the V17 Pro (Review), which we have recently reviewed, so do check out those review for more details about the software features of the Vivo V17.

After experiencing the Snapdragon 675 SoC recently on the Vivo U20 we had a fair idea of what to expect from the Vivo V17. This processor is capable of delivering a smooth, useable Android experience without any lag or stutter. We could also multitask easily between multiple apps thanks to the 8GB of RAM that this phone packs. The in-display fingerprint scanner was quick and we could unlock the phone quickly using it. There is face recognition as well, which uses the tiny hole-punch camera to quickly scan your face and unlock the smartphone.

We ran our usual set of benchmarks and got expected results from the Vivo V17. In AnTuTu, it scored 225,668 which is higher than what the Vivo U20 managed, likely thanks to the extra RAM this phone packs. In Geekbench 5's single-core and multi-core tests, the V17 scored 507 and 1637 respectively. For graphics benchmarks, the device managed to score 41fps and 15fps in GFXBench's T-Rex and GFXBench Manhattan tests respectively.

The V17 has a dedicated microSD card slot

PUBG Mobile defaulted to the High preset by default and ran without any issues. After playing the game for 20 minutes we noticed that the device did get warm to the touch in an air-conditioned room. Playing outdoors could cause the device to get hot, as we have experienced using the Samsung Galaxy M40 (Review) and the Redmi Note 7 Pro (Review) which are both powered by the same processor.

The Vivo V17 packs in a 4,500mAh battery, and it lasted us for a day and a half with our usage which consisted of using WhatsApp and Google Maps, running benchmarks, and taking camera samples. In our HD video loop test, the smartphone managed to go on for 16 hours and 44 minutes. Vivo ships an 18W charger in the box, which is capable of charging the smartphone quickly. It managed to get the V17 to 70 percent in an hour and took a little over an hour and a half to charge it completely.

The Vivo V17 has a quad-camera setup consisting of a 48-megapixel primary sensor, an 8-megapixel ultra-wide-angle camera, a 2-megapixel macro camera, and a 2-megapixel depth sensor. The camera app is unchanged compared to what we have seen on other recent Vivo smartphones. You get a Pro mode that gives you complete control over the different cameras. There is a Night mode as well, which Vivo claims helps the V17 take good shots in low light.

The 48-megapixel primary sensor takes 12-megapixel shots by default. We found it to be quick to set the focus and exposure, and it also uses HDR automatically for bright scenes. In daylight, the Vivo V17 took decent shots and managed good amounts of detail. However, we did notice grainy output in the shadows. We also found the dynamic range to be just acceptable. The wide-angle camera is activated with a toggle in the camera app. We found that the colour tone was slightly off in shots taken with the wide-angle camera. Photos also had distortion towards the edges.

For close-ups, we found the smartphone to be quick to lock focus though we did have to tap the display at times to get it to focus on what we wanted. The camera has a Bokeh Mode which you need to enable for bokeh shots. This puts the depth sensor to work. The V17 managed good separation between subjects and backgrounds in our tests. It also let us set the level of blur before taking a photo. There is a Portrait mode as well, which mainly offers a lot of beautification options before you take a shot.

The macro camera on the V17 lets you get super-close to a subject in order to capture fine details. It managed to focus on tiny objects, but we feel that the novelty of a macro camera will wear off soon for most people.

In low light, the smartphone managed to deliver good shots with ample detail, but fine grain was visible on zooming in. When we enabled night mode, we got brighter images with better details in the shadows as well.

Low-light sample (above), shot with night mode (below) (Tap to see full-size)

Selfies turned out well in the day as well as at night. The V17 also lets you take a selfie using night mode, which results in a brighter image with better details.

Video recording maxes out at 4K for the primary camera and 1080p for the selfie shooter. Footage shot in the day was well stabilised when shooting at 1080p, while 4K video wasn't. We noticed that stabilisation in low light wasn't great, resulting in a very noticeable shimmer effect in the output. Videos taken with the selfie shooter weren't stabilised. We also noticed that the audio recorded with these videos sounded tinny.

The Vivo V17 is positioned below the Vivo V17 Pro and swaps the dual-selfie pop-up module for a tiny hole in the display. Vivo has picked an excellent AMOLED panel with good viewing angles, and the hole isn't distracting. The V17 also offers decent battery life and fast charging.

However, just like the Vivo V17 Pro, the choice of processor is questionable, as you get the same kind of performance from the Vivo U20, which is priced starting at just Rs. 10,990. At Rs. 22,990, the V17 is too expensive for what it offers. At this price, the Redmi K20 (Review) looks like a far better deal with a more powerful processor and a better experience overall.

Realme X2 Price in India, Storage Variants, Colour Options Leaked Ahead of Launch
Amazon Bans Sellers From Using FedEx for Some Prime Deliveries in the US