Vivo T1 5G Review: Everything Comes at a Cost

The Vivo T1 5G is affordable, but there are tradeoffs that buyers should consider 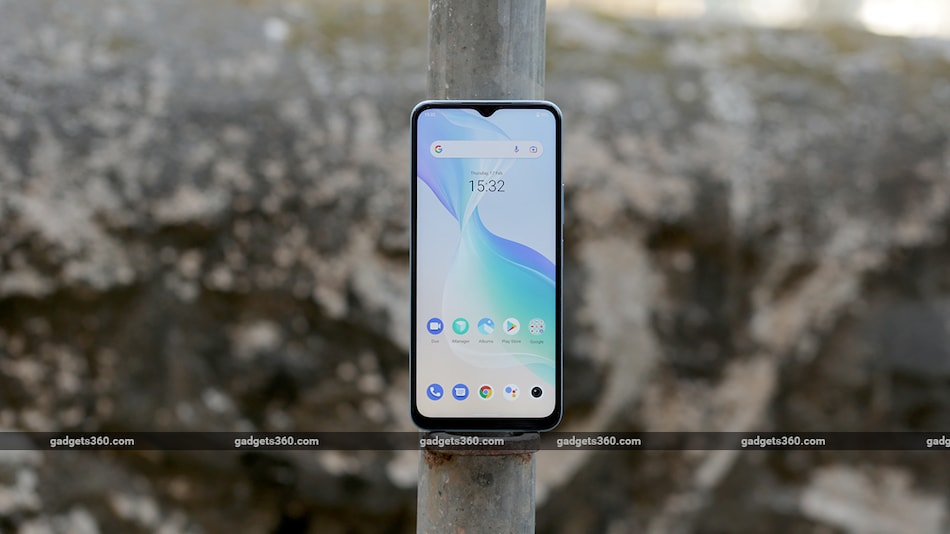 Vivo's new T-series smartphones are aimed at Gen Z consumers. Vivo emphasises that such buyers look for well-designed products that boast of good specifications for the price. The company is launching the Vivo T1 5G in the sub-Rs. 20,000 price range which is bustling with new 5G smartphones from multiple manufacturers. So will the Vivo T1 be the best option for you? I take a closer look at it in this review.

The Vivo T1 starts at Rs. 15,990 in India. The base variant at this price has 4GB of RAM. There are two more variants of the Vivo T1, which offer 6GB of RAM and 8GB of RAM, and these are priced at Rs. 16,990 and Rs. 19,990 respectively. Storage is the same for all three, at 128GB. The Vivo T1 is offered in two colour options, Rainbow Fantasy and Starlight Black.

The Vivo T1 5G adopts a new design language with flat sides all around. It's easy to grip this phone, and the rounded corners don't dig into your palms. Vivo has made the T1 5G thin at 8.25mm and its 187g weight was manageable. It sports a big display with a dewdrop notch, which looks dated compared to other phones in this segment that sport hole-punch displays. It has thin bezels on the sides, while the chin is thicker.

The T1 5G has a plastic frame with the power and volume buttons on the right. Vivo has integrated the fingerprint scanner into the power button, which makes unlocking this phone easy. The left is bare, while the top has the SIM tray and secondary microphone. At the bottom, the T1 5G has a 3.5mm headphone jack, USB Type-C port, loudspeaker, and primary microphone.

Vivo has made the back completely flat. The camera module sits in the top left corner and doesn't protrude much. I had the Vivo T1 5G in the Rainbow Fantasy colour, and it was striking to look at. The sparkly iridescent finish shifted colour when the phone was moved around. This helped hide fingerprints quite well, but you also get a clear case in the box.

Vivo has focused on certain specifications to sway Gen Z buyers. The Vivo T1 5G has a 6.58-inch LCD panel with a 120Hz maximum refresh rate and Panda glass for protection. You also get a peak touch sampling rate of 240Hz when this phone is in game mode. The panel is set to Smart Switch by default, allowing it to automatically switch between 60Hz, 90Hz, and 120Hz refresh rates.

The Vivo T1 5G is powered by the Qualcomm Snapdragon 695 SoC, which also powers competitors such as the Moto G71 5G (Review). Vivo says it has also added a vapour cooling chamber to prevent the SoC from heating up when under load. It also offers a RAM expansion feature that lets you use 1GB of storage as RAM with the base variant, while the higher variants allow 2GB and 4GB to be used respectively.

While 128GB of internal storage feels generous, you can expand it using a microSD card in the hybrid dual-SIM slot. The Vivo T1 packs in a 5,000mAh battery and has support for 18W charging which is slower than what the competition offers. Vivo bundles an 18W charger in the box.

There is support for two 5G bands which is much lower than the Moto G71 5G's 13 bands. It also has support for dual 4G VoLTE, Bluetooth 5.1, dual-band Wi-Fi, and five satellite navigation systems. It does not have NFC, so tap-and-go payments won't be possible on this phone.

The Vivo T1 5G has a USB Type-C port, 3.5mm headphone jack, and speaker at the bottom

Vivo ships the T1 5G with Funtouch OS running on top of Android 12. The UI is very easy to use and feels fresh. Android 12 features such as the privacy dashboard are now available, and you can see which apps have access to the microphone, camera, your location, and other things. Vivo has also implemented privacy indicators, so you will see a green or orange dot in the top-right corner of the screen when the camera or the microphone have been used by any app. You can also choose to allow location access only when an app is in use. Vivo has even added a screen capture protection feature that prevents apps from capturing screenshots or video when you're typing a password.

Vivo has made multiple customisations and you can apply your own style with the Themes app. It lets you choose animations on the device. While this is all great, the phone does come with a lot of bloatware preinstalled such as Moj, MX Takatak, ShareChat, Cred, Josh, and Facebook. Thankfully, these can be uninstalled completely.

GameSpace lets you access all your games in one place, and gives you a breakdown of the time you've spent playing them. There is an Ultra Game mode that kicks in when you launch a game. It offers a nifty voice changer feature, and also lets you block incoming notifications and lock the screen brightness. An Esports mode does all these things too, but also disables gestures and allocates SoC resources based on the current frame rate and temperature.

The Vivo T1 5G was snappy and showed no signs of slowing down, in my experience. I had the 8GB RAM variant for this review, and the 4GB RAM expansion option was enabled by default. I could multitask between multiple apps easily, and with my use, the phone never had to kill an app in the background. Apps loaded quickly. The single bottom-firing speaker was loud, but a stereo setup is always better. Vivo's side-mounted fingerprint scanner was accurate and only needed a single tap to unlock the smartphone. Face recognition also worked consistently during the review period.

Having tested the Qualcomm Snapdragon 695 SoC in a different smartphone, I had a fair idea of its performance. Nonetheless I ran a few benchmarks to see where the Vivo T1 5G stands in comparison. It managed to score 414,287 points in AnTuTu, which is higher than the Moto G71 5G's result. However, the two phones performed similarly in most other tests. In Geekbench 5's single-core and multi-core tests, the T1 5G scored 668 and 1,930 points respectively. It also managed 85fps and 18fps in GFXBench's T-Rex and Car Chase benchmarks respectively.

The Vivo T1 5G has a hybrid dual-SIM tray

I ran Battlegrounds Mobile India (BGMI) and it defaulted to its “HD” graphics and “high” frame rate settings. It was playable at these settings and I did not notice any stutter during gameplay. After 15 minutes, I observed a 3 percent drop in the battery level which is acceptable.

The Vivo T1 5G offered good battery life and lasted me about two days with light to medium usage. In our HD video loop test, the phone went on for 18 hours and 48 minutes. Idle battery drain was really low which helped this smartphone avoid needing to be charged too often. There is support for 18W fast charging which is lower than what the competition is currently offering. With the supplied charger, the phone got to 33 percent in 30 minutes, and 64 percent in an hour, taking around an hour and a half to charge completely.

The Vivo T1 5G sports a triple camera system at the back. It has a 50-megapixel primary camera, a 2-megapixel macro camera, and a 2-megapixel depth sensor. For selfies, it has a 16-megapixel shooter. The camera app is pretty straightforward and easy to use. Shooting modes can be changed easily by swiping. The macro camera toggle is easy to miss, and implementing this as a shooting mode would have been better.

Vivo claims to offer a Super Night mode for low-light photography, and Portrait Styles which are filters that can be applied while taking a portrait photo. Strangely, these features are missing on the base 4GB variant. It also misses out on dual camera bokeh and relies on a single camera instead.

In daylight, the Vivo T1 managed detailed photos. The primary camera's output had good colours, and text at a distance was also legible. However, it struggled to set exposure correctly in brighter scenes. You don't get an ultra-wide angle camera on the Vivo T1 5G, which is a feature that most competing phones do have. Close-up photos were decent, however, those shot under direct sunlight had boosted colours. Portraits had decent edge detection but this phone did struggle to separate the subject correctly from the background at times. The macro camera allowed me to get close to objects and could capture tiny details quite well.

Low-light shots were strictly average. Colours appeared muted, and the primary camera could not capture much detail in the shadows. With Super Night Mode enabled, the phone needed 4-5 seconds to take a shot, during which I had to stay still. This resulted in brighter shots with more detail in the shadows and improved colours.

Selfies were quite detailed and the T1 5G could manage HDR shots in bright scenes quite well. Low-light selfies with a light source nearby were sharper than those in dimly lit environments. Selfie portraits managed to separate the subject and the background well and had a soft blur to the background.

You can shoot 1080p video with the primary rear camera as well as the selfie camera. The output wasn‘t stabilised and there were noticeable shakes in video recorded while walking around. Low-light footage was slightly grainy and had jitter.

The Vivo T1 5G is the first smartphone in the new T-series aimed at Gen Z buyers. Vivo has focused on sought-after specifications such as a powerful SoC, 5G, a 120Hz refresh rate display, and a big battery. However, in order to deliver these at an aggressive price, some compromises have been made, such as the dewdrop notch that looks dated, limited 5G band support, no ultra-wide-angle camera, and only 18W charging. The entry-level 4GB RAM variant of the Vivo T1 5G also misses out on some camera features, which potential buyers should be aware of.

While some of these factors could make the Vivo T1 5G less appealing for some buyers, the pricing will still make sense for many others. If you want to consider alternatives, the Moto G71 5G (Review), Realme 8s 5G (Review), and Redmi Note 11T 5G (Review) are all worth considering.

Tencent, Alibaba Added to 'Notorious Markets' List by US
Tesla Faces Another Investigation in US, This time for Unexpected Braking