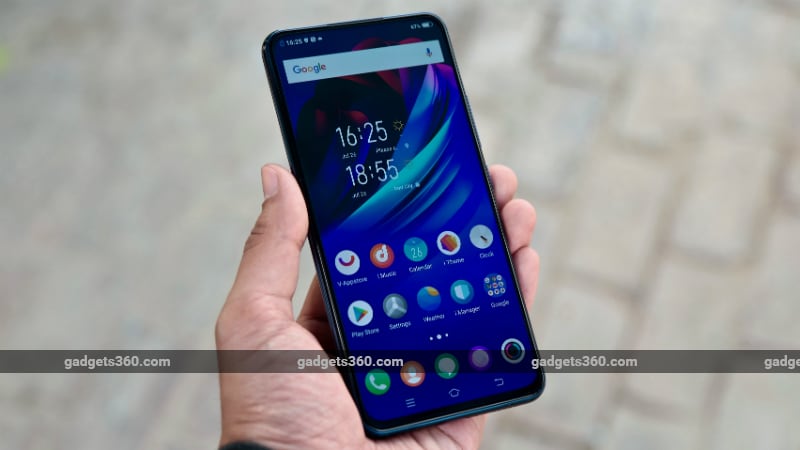 The notch is a polarising design trend that became more or less ubiquitous in 2018. It is a necessary evil in order to facilitate the near bezel-less smartphones of today. In order to get rid of the notch, OEMs have been experimenting with pop-up cameras, sliding smartphones, selfie camera display holes, and what-not. After launching the Vivo Nex with a pop-up camera in 2018, Vivo has now launched the Vivo Nex Dual Display Edition. With displays on the front as well as the back, not only does the phone eliminate the notch, it does away with any moving parts which might pose questions on long term durability.

The candybar-style phone has gorilla glass on the front and back, with an aluminium frame for rigidity. It looks extremely sleek and the stylish black and blue colour gradient adds a touch of class. Vivo has managed to keep the thickness in check despite having to cram in two AMOLED panels. The panel up front has narrow borders but the one on the back has a sizeable chin and a thick forehead where the three camera sensors, ring light, and IR sensor reside.

The earpiece is placed in a thin slit just above the primary display, and is not visible on first glance. Build quality is top-notch and the phone feels extremely solid in the hand. However, the solid build quality is offset by the the fact that there are two screens that can be shattered. The dual display design severely limits case options as well. With that in mind, Vivo has bundled a TPU bumper case in the box which is of surprisingly high quality.

The box we received contains the aforementioned bumper case, a 22.5W fast charger, a USB Type-C cable, and a pair of earphones that offer decent sound quality. This is not the Indian retail box, so the contents might vary if and when the phone is launched in India.

The display up front is 6.39-inches in size and has a resolution of 1,080x2,340 pixels and an aspect ratio of 19.5:9. The secondary display is a smaller 5.49-inches affair and has a resolution of 1080x1920. Both panels are Super AMOLED and have adequate brightness levels. Colours are not oversaturated, as is the case with most AMOLEDs these days, and the viewing angles are top-notch. Vivo claims the rear display can be used as a trigger for games like PUBG, which is a neat but very limited feature. Our first impressions of both displays is quite positive, but a final verdict will of course have to wait till the full review.

Both displays do not turn on at the same time and there are two power buttons on either side of the phone. The one on the right side shares space with the volume rocker and wakes up the main display while the one on the left side activates the secondary display. The smartphone also lets users move between the two displays with a three finger swipe gesture. The SIM tray, solitary loudspeaker, and USB Type-C port are found at the bottom. The speaker is surprisingly loud and the sound on offer is quite full and warm. There's a 3.5mm headphone jack up top, which is a rare sight in flagships these days, and pleases the audiophile within us.

Our experience with in-display fingerprint sensors has not been very positive in the past as they tend to look and feel futuristic but be frustrating to use. This phone does not change our opinion. The setup is process is quite cumbersome and it takes multiple tries to get your fingerprint registered. The speed is better than what we witnessed with the Vivo Nex (Review), but is still far from instantaneous. However, it is the spotty accuracy, that turns this novelty into an irritant.

Thankfully, there is another nifty method of device authentication in the form of 3D Face Unlock. The Vivo Nex Dual Display Edition offers iPhone X-like 3D Face scanning via the third Time of Flight (TOF) camera sensor which works in conjunction with the IR sensor. We will have to test this feature across multiple lighting conditions, but in the limited time we used it, it worked flawlessly.

The Vivo Nex Dual Display Edition is powered by the Qualcomm Snapdragon 845 processor with integrated Adreno 630 graphics. There's a 3,500mAh battery on board with 22.5W fast charging and 128GB of internal storage, which cannot be expanded upon. On the connectivity front, the dual-screen smartphone supports Bluetooth 5.0, dual-band WiFi, GPS, GLONASS, a USB Type-C (v2.0) port, and the good old 3.5mm jack.

After the OnePlus 6T Mclaren Edition (Review), this is the second phone we have used with a whopping 10GB of RAM. We do believe more than 8GB is overkill at the moment, but we will have to wait till we can perform extensive tests to see if Vivo has made efficient use of the ample memory on hand.

The smartphone performed admirably in the limited time we had with it. As expected, we did not experience any memory management issues and the phone flew through day-to-day use. What lets the experience down though is the cluttered and confusing software. FunTouch OS has been the Achilles heel of most Vivo smartphones, and the situation is unchanged here. The settings menu is in desperate need of simplification and the sheer number of gestures and custom features can get intimidating at times. There are a ton of first-party Vivo applications on board as well that compete with Google's own.

The 6.39-inch panel up front has narrow borders

Where does the front camera reside? As mentioned above, there is no notch, or display hole. In fact, there is no front camera at all. To take a selfie, you have to flip the phone over and use the secondary display as a viewfinder. Vivo has embedded a ring light around the camera sensors which glows various colours when the phone is charging or when new notifications come on. The embedded LEDs also act as a flash and shine white when taking selfies.

The few images we captured had a decent amount of detail and vivid colours. The images did appear a bit too over sharpened though. Vivo has packed in a lot of features within the camera app such intelligent scene detection, an AI beauty mode, lighting effects such as studio light, stereo light, and rainbow light, and AR stickers. There's also a mirror mode, which displays the cameras output on both displays, allowing the subject as well as the photographer to see the output. This is an incredibly nifty feature which allows you to pose the way you like and also control the image when someone besides you is taking the picture. A detailed assessment of the quality of the three cameras as well as a deep dive into all these features will have to wait till the full review.

The Vivo Nex Dual Display is a very ambitious smartphone and is undoubtedly one of the most refined implementations of the dual-screen form factor. Admittedly, the second screen is of little use apart from selfies, but the phone on a whole looks like a solid all-rounder, and most importantly is unique and innovative.

In China, the Vivo Nex Dual Display Edition retails for CNY 4,998 which roughly translates to Rs. 51,300. Vivo hasn't yet confirmed when or even if the smartphone will launch in India, and what its price might be. Stay tuned to Gadgets 360 for updates, as well as our detailed review of the Vivo Nex Dual Display Edition, in which we will extensively test the phone's cameras, performance, software, and battery life, and deliver a final verdict.

Tales of Vesperia: Definitive Edition Review
CES So Far Has Been Less About Products and More About Experiences