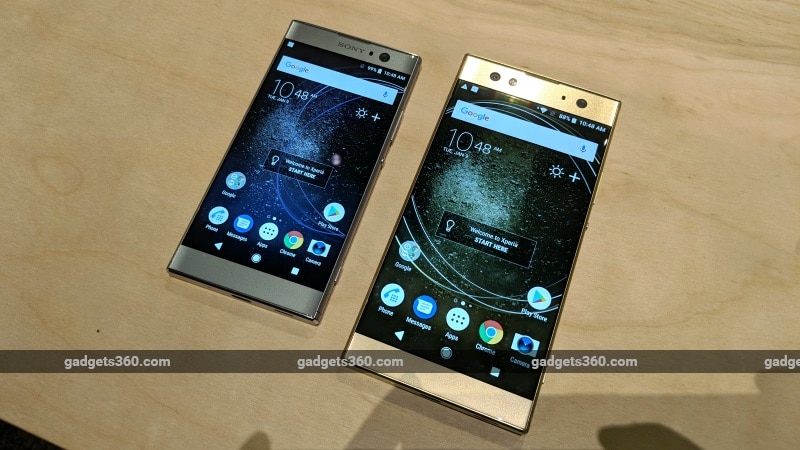 Sony has announced two new smartphones at CES 2018, called the Xperia XA2 and Xperia XA2 Ultra. These two mid-range smartphones should be launching sometime in the next few months, and we expect that India will most likely get Dual-SIM versions of both, as opposed to the single-SIM versions that were shown off at CES. We got the chance to spend a little time with both models, and here are our initial impressions.

Starting with the build quality and design, these new smartphones aren't very different from Sony's existing lineup. They still feature the smooth, seamless "loop surface" design language and lack trendy 18:9 displays (which we're guessing that Sony is saving for its premium 2018 offerings). Both phones have metal frames which look and feel really nice when you hold them. The backs are plastic, but Sony has given them a metallic treatment so they blend in with the metal frames.

Of the two models, the Xperia XA2 is definitely more ergonomic in terms of design and grip. We think that this will be the more popular of the two. The Xperia XA2 Ultra is noticeably thicker and heavier. and honestly, it is quite cumbersome to deal with in one hand.

Both smartphones have Full-HD screens, but of course their sizes are different. The Xperia XA2 has a 5.2-inch screen, compared to 6 inches for the Xperia XA2 Ultra. The smaller one should theoretically be slightly sharper, although we didn't notice much of a difference during our short hands-on session. Even though these are traditional 16:9 displays, Sony has managed to reduce the borders on the sides quite a bit, so the phones don't look too dated. We have USB Type-C ports (with fast charging support) on the bottom of each phone, along with a single speaker grille. Both also have a flap on the left for the SIM tray and a microSD card slot, while on the right, we have Sony's trademark little circular power button and a volume rocker. Both phones retain the 3.5mm headphone socket.

Around the back, we have a circular fingerprint sensor and a 23-megapixel camera. The fingerprint sensor on the Xperia XA2 is definitely more accessible due to the phone's smaller body. Both smartphones run on the Qualcomm Snapdragon 630 Mobile Platform and have 32GB of built-in storage. The Xperia XA2 has 3GB of RAM while the XA2 Ultra has 4GB of RAM. There's also a difference in the battery capacities - the smaller model packs in a 3300mAh battery while the XA2 Ultra has a 3580mAh battery. Neither of the phones has any sort of waterproofing certification, but both do run on Android 8 Oreo along with Sony's proprietary UI.

Apart from physical size, the two new phones also differ in terms of their front cameras. The Xperia XA2 Ultra is geared more towards selfie lovers as it has a 16-megapixel primary front-facing camera with optical image stabilisation (OIS) as well as an 8-megapixel sensor with a wide 120-degree lens. The smaller Xperia XA2 only has a single 8-megapixel camera with the same 120-degree lens. Around the back, both smartphones share the same 23-megapixel sensor that's capable of 4K video recording, and slow motion video at up to 120fps. There's no OIS but we're told that the rear camera does benefit from Sony's SteadyShot stabilisation feature.

The Xperia XA2 and XA2 Ultra will be available in multiple colours when they launch in the coming months. As for pricing, Sony hasn't revealed that yet, but given the specifications, we hope that they will both be in the sub-Rs. 25,000 segment when they eventually land in India. So, what did you think of Sony's first 2018 offerings? Let us know your thoughts in the comments section below.