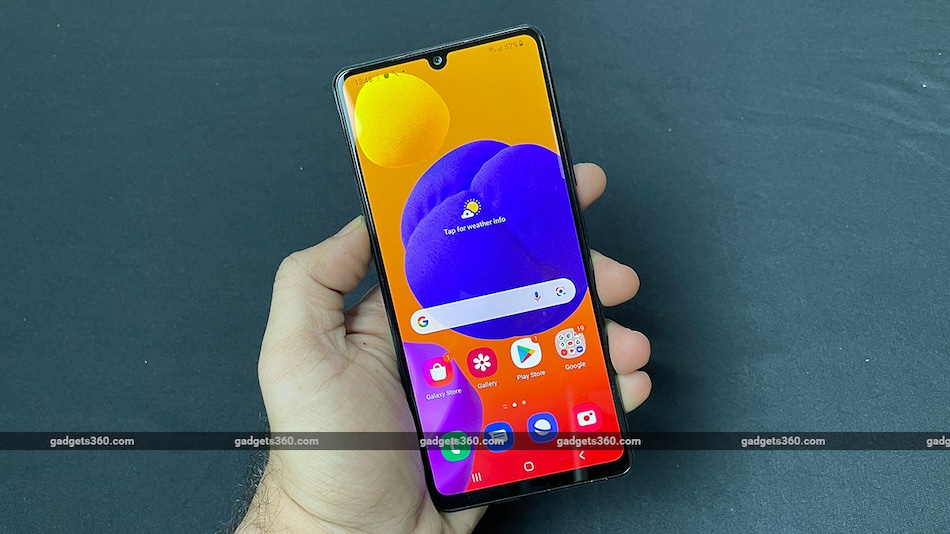 The Galaxy M42 5G bears an uncanny resemblance to the Galaxy A42 5G, and unsurprisingly these devices have a lot in common. Since the latter hasn't been launched in India yet, the M42 5G looks fresh. This is a big smartphone and it has a 6.6-inch display with a dewdrop notch at the top. Build quality seems good and the body does not feel plasticky. It has a polycarbonate back with a glossy finish which Samsung refers to as “Glasstic”. This finish is quite susceptible to smudges. I found myself wiping the back panel quite often to keep it clean. Samsung does not provide a case in the box which would have helped keep fingerprints off.

You get to choose between two colour options for the Galaxy M42 5G, Prism Dot Gray and Prism Dot Black. I had the latter with me, which has a colour block finish with the top quarter being solid black while the rest gets progressively lighter. The lower three-quarters of the back also reflects light in an iridescent pattern. I found all this a bit too flashy for my liking, and the lack of a subtle colour option may make this choice a little harder for some people.

The Galaxy M42 5G has a square-shaped camera module that houses four sensors, with the LED flash just below. It protrudes very slightly and I don't see this being a problem. I found the button placement on the Galaxy M42 5G to be good as I could reach them easily while holding the device. Samsung has curved the back panel along the sides making it easy to grip this smartphone. It isn't too bulky, measuring 8.6mm in thickness and weighing 193g. I found the weight to be well distributed while holding the device.

Samsung has used the Qualcomm Snapdragon 750G processor to power the Galaxy M42 5G. This processor is also seen powering direct competitors such as the Moto G 5G and the Xiaomi MI 10i(Review). It'll be interesting to see how the Galaxy M42 5G fares against these devices. The 6.6-inch Super AMOLED display sports an HD+ resolution which is surprising and disappointing for a smartphone that costs over Rs. 20,000. The Galaxy M42 5G has an in-display fingerprint scanner that is easy to reach. The display does have Corning Gorilla Glass 3 for protection which should help keep it safe from scratches.

There is a tiny dewdrop notch at the top that houses a 20-megapixel selfie camera. The quad-camera system on the rear consists of a 48-megapixel primary camera, an 8-megapixel ultra-wide angle camera, a 5-megapixel macro camera, and a 5-megapixel depth sensor.

You can choose between 6GB and 8GB RAM variants of the Galaxy M42 5G but storage capacity remains the same at 128GB. You can expand storage by upto 1TB using the hybrid dual-SIM tray which means this comes at the cost of the second SIM. Samsung could have offered a higher storage variant or gone with a dedicated slot for storage expansion.

Samsung did surprise us with a massive 7,000mAh battery in the Galaxy M51(Review) but the company hasn't gone down the same path this time. You get a 5,000mAh battery on the Galaxy M42 5G which is still bigger than average these days. The smartphone has support for 15W fast charging and comes with a 15W charger in the box.

On the software front, Samsung offers OneUI 3.1 (not OneUI Core) on top of Android 11. The smartphone was running the March Android security patch but got an update to the April patch soon after unboxing it. OneUI will feel familiar to Samsung users and I did not find the UI experience to be different from the Galaxy A52 which I recently tested. There is some bloatware preinstalled, which I would recommend that users uninstall right after setup. Overall, the UI seems smooth and the overall experience feels polished.

Samsung has picked a powerful processor for the Galaxy M42 5G to take the battle to the competition. While the Rs. 21,999 starting price is competitive, it does make me wonder whether Samsung has cut corners to reach it. So is the Galaxy M42 5G a smartphone worth recommending? I'll answer this in the full review, coming soon.