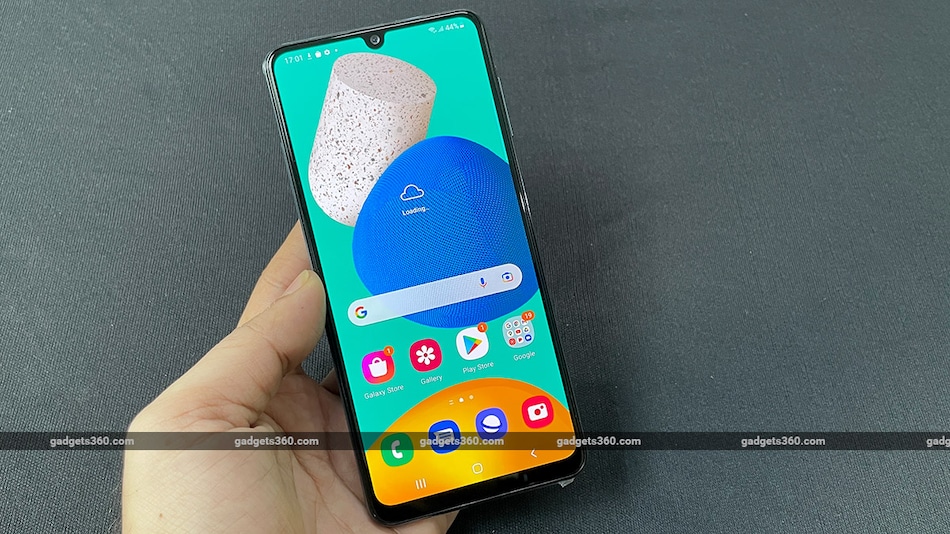 The Galaxy M32 is the latest addition to Samsung's budget-focused M Series and it offers some interesting features. It boasts of a full-HD+ AMOLED display with a 90Hz refresh rate, and a big 6,000mAh battery. It also runs the latest version of Samsung's One UI on top of Android 11. I got my hands on the new Galaxy M32 and here are my first impressions.

The Galaxy M32 is a big smartphone and is noticeably chunky. It measures 9.3mm in thickness and weighs 196g. Samsung has curved the sides of the frame to help mask the bulk and make it easier to hold. The frame is also curved at the top and the bottom which give it a neat look. At the top, the Galaxy M32 only has the secondary microphone, while the 3.5mm headphone jack, primary microphone, USB Type-C port, and loudspeaker are at the bottom.

Samsung has gone for a side-mounted capacitive fingerprint scanner on the Galaxy M32. It is slightly recessed which makes it easy to find. It's reachable, but the volume buttons are a bit too high, needing a stretch to reach. You only have the SIM tray on the left side. It has two Nano-SIM slots and a dedicated microSD slot for storage expansion.

At the back, I like how Samsung has flush-mounted the camera module in the top left corner. As a result, the phone rests flat on a table. The Galaxy M32 packs in a 64-megapixel primary camera, an 8-megapixel ultra-wide-angle camera, a 2-megapixel macro camera, and a 2-megapixel depth sensor. The back panel is made of plastic and has a striped pattern.

The Galaxy M32 has a 6.4-inch AMOLED display with a full-HD+ resolution and a 90Hz refresh rate. Samsung also claims a peak brightness of 800 nits on this display in High Brightness mode, something I will test during the full review. The display has a dewdrop notch, which Samsung refers to as ‘Infinity-U'. The notch houses a 20-megapixel selfie shooter. Samsung has packed in a 6,000 mAh battery. This phone supports 25W fast charging but Samsung only ships a 15W charger in the box.

Samsung has picked the MediaTek Helio G80 processor to power the Galaxy M32. I have the base variant with 4GB of RAM, and it has felt at ease handling regular day-to-day tasks in the short time I've been using it for so far. I will be running our full suite of benchmark tests on the Galaxy M32 to see how it fares, and will report on that in the full review.

The software experience felt very familiar, as Samsung uses One UI 3.1 on the Galaxy M32 running on top of Android 11. The phone did have a number of preinstalled apps, which was a little disappointing. During the setup process, it also suggested more apps for installation, and skipping that wasn't easy.

With the Galaxy M32, Samsung is offering a big battery and an AMOLED display with a high refresh rate at a tempting price. Is this now the best set of features you can get for the price? I will be putting the Galaxy M32 through its paces in the full review, so stay tuned to Gadgets 360.