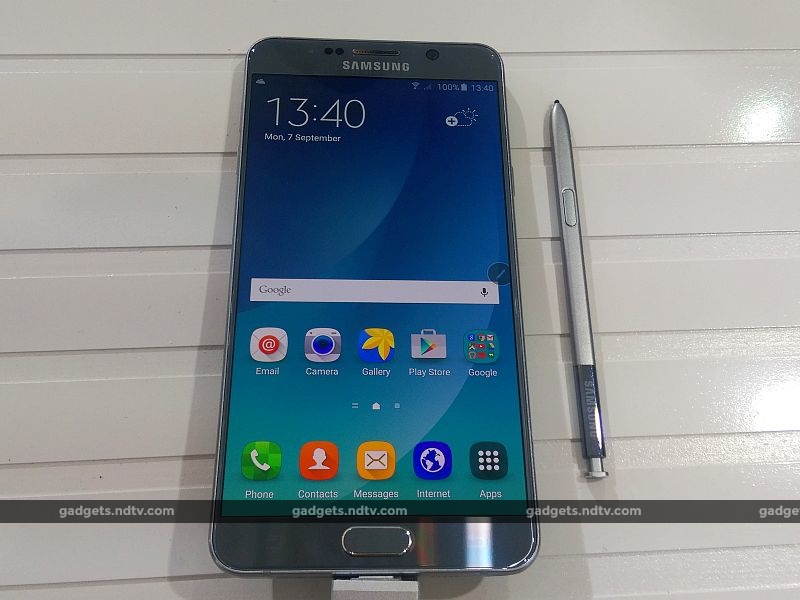 Samsung's first oversized smartphone, the original Samsung Galaxy Note, was launched back in 2011 at the IFA exhibition in Berlin. The South Korean company has launched a new Note model at the same show every year until last year. This year, Samsung unveiled the new Samsung Galaxy Note 5 at its own Galaxy Unpacked 2015 event in New York where it also revealed the new Samsung Galaxy S6 Edge+. The company hasn't given any specific reason why the Galaxy Note 5 was launched a little early, though several reports claimed it to be a move to make sure the new devices are in the market ahead of Apple's next iPhones.

While we can't say as of now whether the move has given Samsung a head start against Apple's new iPhones, due to launch on Wednesday, both the Galaxy Note 5 and the Galaxy S6 Edge+ have surely made the premium-end segment seem interesting. As hinted last month at the India launch of the Galaxy S6 Edge+ (First Impressions), Samsung has just launched its new Note-series smartphone, the Galaxy Note 5, in India. On being asked how it plans to convince loyal Galaxy Note customers to upgrade to the new Galaxy Note 5, Samsung India at the launch was confident that the new Note brings plenty of improvements over its predecessors.

At the launch, we got to spend a little time with the new Galaxy Note 5. The new Note model will be available in India in three colour options: Black Sapphire, Gold Platinum, and Silver Titanium. We got a Silver Titanium model to play around with. 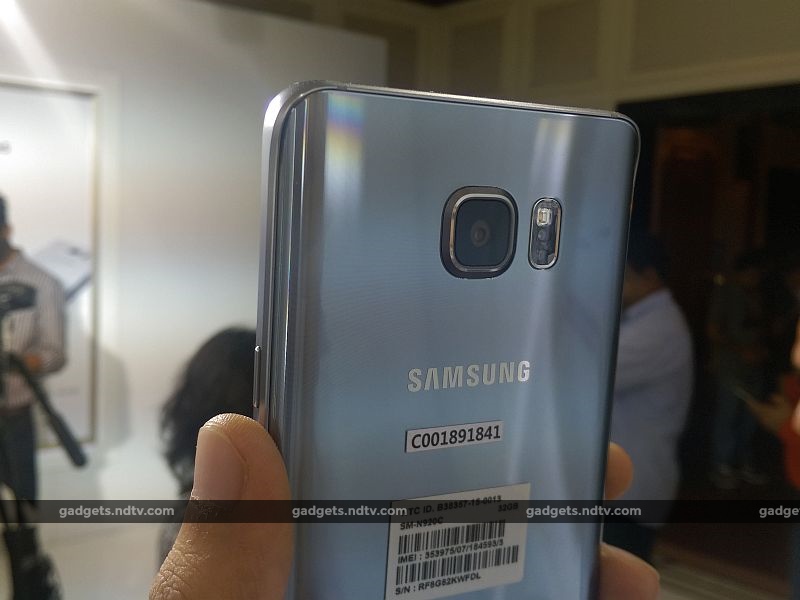 The Galaxy Note 5 is comfortable to hold but is barely usable with just one hand, thanks to its big 5.7-inch screen. The first thing we noticed when we held the new Galaxy Note 5 was its metal frame. Much like the Samsung Galaxy S6, Galaxy S6 Edge, and Galaxy S6 Edge+, the metal rim on the Galaxy Note 5 curves fluidly so that it is wider on the top and bottom and narrower on the sides. Since the launch of its Galaxy Alpha smartphone, Samsung has been using metal frames on many of its premium handsets including the Galaxy Note 4 (Review | Pictures). However, we can definitely say that compared to its predecessor, the Galaxy Note 5 feels sturdier.

Samsung's traditional physical home button, which has now become an integral part of almost every Galaxy device, sits right below the display, with the fingerprint reader embedded into its surface. The capacitive Back and Recents buttons sit on either side of the Home button. The power button can be found on the right while the volume rocker is on the left. 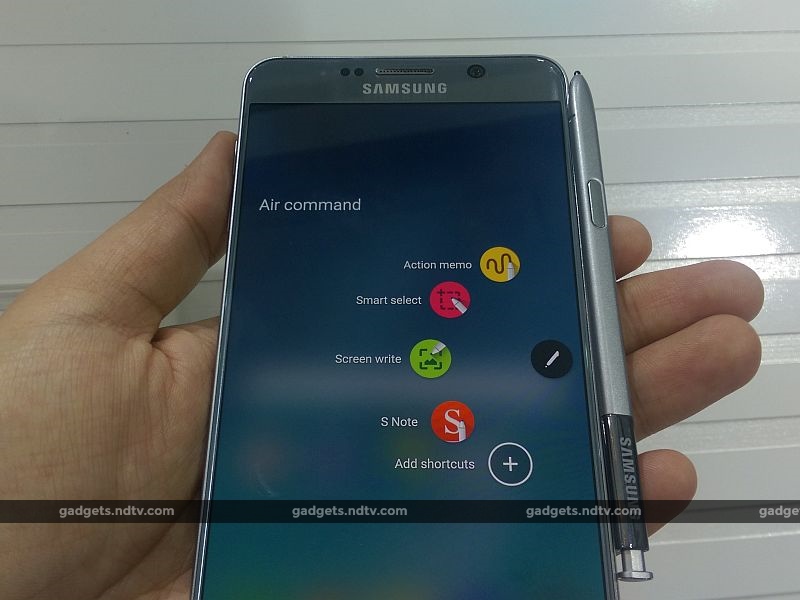 The placement of the LED flash accompanied and the heart rate sensor has been changed in the new Note. Both are now placed next to the camera. In the Samsung Galaxy Note 4, they were placed right below the camera.The S Pen stylus can be pulled out of a silo on the bottom of the Note 5, and features a one-click eject mechanism. The Micro-USB port and 3.5mm audio jack are also on the bottom.

The Samsung Galaxy Note 5 features a 5.7-inch QHD (1440x2560-pixel) Super-AMOLED screen with a pixel density of 515ppi, which is the same as that of the Galaxy Note 4. The display looks bright with satisfactory colour reproduction. The viewing angles and visibility under direct indoor lighting were good. The phone is powered by a 64-bit octa-core Exynos 7420 chipset with four Cortex-A57 cores clocked at 2.1GHz and four Cortex-A53 cores clocked at 1.5GHz, coupled with 4GB of LPDDR4 RAM. Samsung has used its in-house Exynos 7420 SoC in all of its high-end smartphones launching this year. The Galaxy Note 4 was powered by Qualcomm's Snapdragon 805 processor.

In our limited time spent with the handset, we observed that it handled multitasking and Internet browsing pretty easily without any lag. We will reserve our verdict on Samsung Galaxy Note 5's performance until we get a chance to put it through its paces for a detailed review.

The company has launched 32GB and 64GB models in India. Unfortunately, Samsung declined to comment on whether or not there's any chance that the 128GB model will be available. It was briefly listed by the company following its Galaxy Unpacked event. The Galaxy Note 5 has no microSD card slot, and features a non-removable 3,000mAh battery.

The Galaxy Note 5 runs its own custom UI on top of the Android 5.1 Lollipop. We were unable to find many of the usual features of Google's stock Android Lollipop experience on the handset. The new UI however feels more fresh and light than previous versions of TouchWiz, which has had its share of controversy in the past. 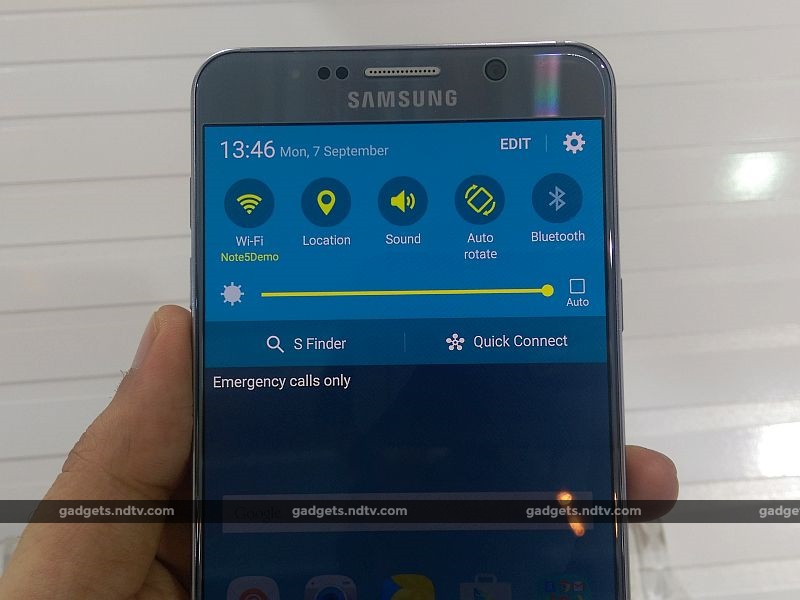 (Also see: Why Microsoft's Push Into Google's Android Is Good News for Users)

One of the most interesting moves Samsung has made is the bundling of Microsoft's suite of apps. One can find Office apps such as Excel, OneNote, OneDrive, PowerPoint, Skype, and Word. Much like recently launched high-end Galaxy devices, the new Note 5 also offers consumers 100GB of free OneDrive cloud storage free for two years.

The S Pen stylus features remain central to the Galaxy Note 5's software. The Air Command option, which pops up when a user hovers over the home screen with the S-Pen, shows options for Action Memo, Smart Select, Screen Write, and S Note tools. Users can add more shortcuts, if required, to the launcher. Most of the apps on the Galaxy Note 5 looked much the same as on the Galaxy Note 4.

Samsung India at the launch stressed heavily on its new Fast Charging technology, which allows the new Note 5 charge fully in roughly 90 minutes with the regular wired charger, or 120 minutes wirelessly. A recent test also showed that Samsung devices do charge quickly in short periods of time.

The Galaxy Note 5 sports a 16-megapixel rear camera with f/1.9 aperture and optical image stabilisation, as well as a 5-megapixel front-facing camera. The camera app on the new Note 5 packs some goodies from the Galaxy S6 and Galaxy S6 Edge+, such as the Live Broadcast feature which allows users to live stream video directly to a connected YouTube account. Samsung India believes that the new Live Broadcast feature will find early adopters similar to popular apps like Periscope and Meerkat. However, the company declined to comment about whether the feature will be landing on older devices. 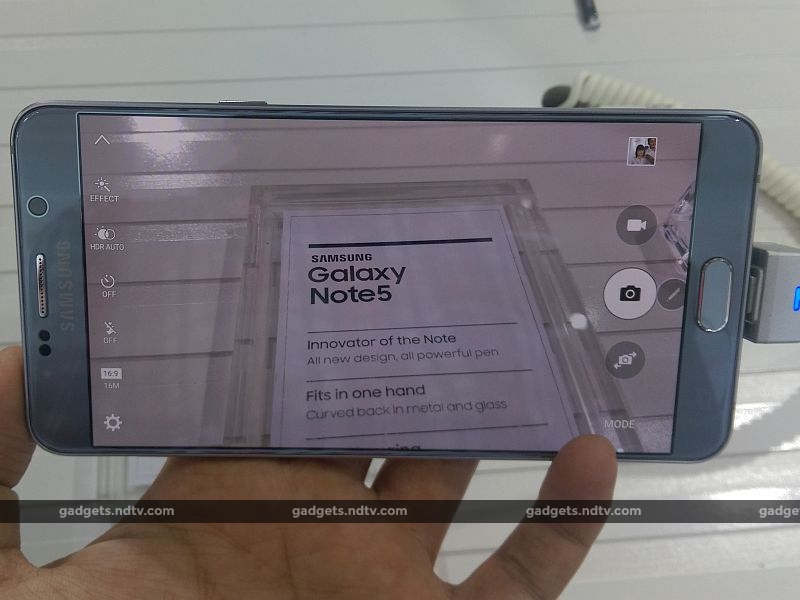 In our limited tests of the cameras, we found the images taken with the Galaxy Note 5 in normal indoor lighting to be vibrant with proper colours showing up. Low-light shots also seemed good.

Final Thoughts
The new Samsung Galaxy Note 5 definitely brings some upgraded innards and slight updates to the UI compared to its predecessor. One of the most notable differences between the Galaxy Note 4 and Galaxy Note 5 in India has been the pricing. While the Galaxy Note 4 was launched last year starting at Rs. 61,500 (with the market price settling at around Rs. 58,500), the new Galaxy Note 5, on the other hand, starts at Rs. 53,900 for the 32GB model. The 64GB Galaxy Note 5 variant will be available at Rs. 59,900. Both will go on sale starting September 20 in India.

For new users, the new lower pricing of the Galaxy Note 5 may be great news. There doesn't seem to be any reason that Galaxy Note 4 users will want to go for the upgraded version, but those using previous models in the series might be tempted. At these prices, the Apple iPhone 6 Plus (Review | Pictures) remains a tough competitor to the Note 5, and its successor will be even more compelling if pricing stays the same.