The Samsung Galaxy M31 feels like an updated Galaxy M30s 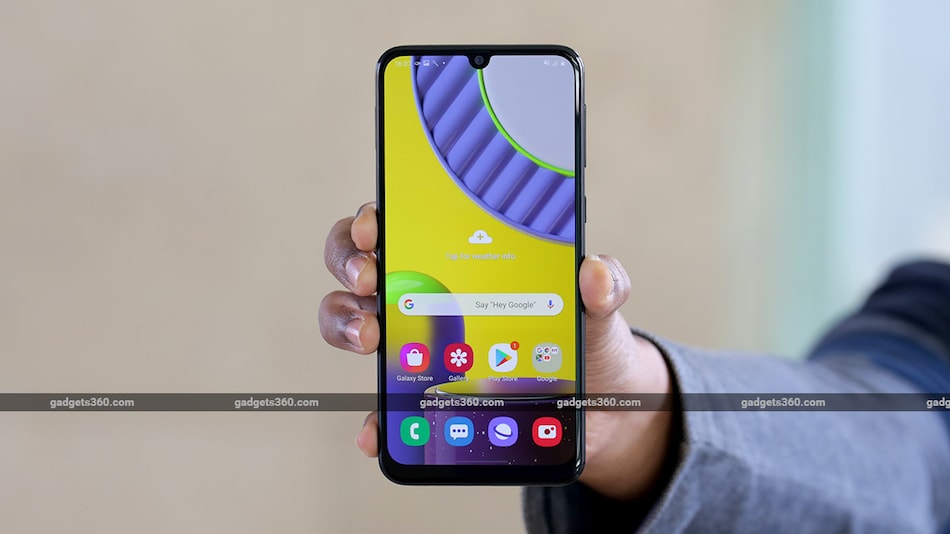 The Samsung Galaxy M series has gained a lot of popularity thanks to affordable prices and up-to-date hardware. Samsung has managed to lower prices by selling these models online, reducing distribution costs. The sub-Rs. 15,000 Samsung Galaxy M30 set the pace, and a refreshed version, the Galaxy M30s, really helped the company strengthen its position in this segment. Samsung has now launched a successor to the Galaxy M30s, called the Galaxy M31. You now get a quad-camera setup, an upgrade from the triple camera setup on the M30s. However, the processor and the battery capacity remain unchanged. Will this be enough to keep the Galaxy M series competitive in the market? We review the Galaxy M31 to find out.

At first glance, it is hard to distinguish between the Samsung Galaxy M30s (Review) and the Galaxy M31 from the front. Both smartphones sport big 6.4-inch displays with waterdrop notches, which Samsung calls Infinity U displays, The bezels aren't thin, but are acceptable for the price. Just like with other M series smartphones, Samsung has used plastic in the construction of the Galaxy M31. The earpiece is sleek and sits right above the display in the frame of the smartphone.

Pick the Galaxy M31 up and it feels comfortable to hold in the hand. The sides are slightly curved which helps with grip. Samsung has positioned the power and volume buttons on the right of the device. The power button is easy to reach but the volume buttons could have been positioned better. On the left is the SIM tray which did not sit perfectly flush on our review unit. The Galaxy M31 has a 3.5mm headphone jack, primary microphone, USB Type-C port, and speaker at the bottom. The top only has the secondary microphone.

When you look at the back of the Galaxy M31, you'll see some changes. The camera module is similar to that of the Galaxy M30s but it now packs a fourth camera. Next to this is the fingerprint scanner which was comfortable for us to reach while holding the smartphone.

The Galaxy M31 packs in a big 6,000mAh battery and weighs 191g makes the device feel a little heavy. Samsung has thankfully bundled a 15W charger in the box which should help keep charging times down. The company offers the Galaxy M31 in two colours, Ocean Blue and Space Black. We had the Space Black variant for review, and it picked up fingerprints and smudges very easily. There is no case in the box, so you may want to buy one.

The spec sheet of the Galaxy M31 looks similar to that of the Galaxy M30s. It sports a 6.4-inch AMOLED display with full-HD+ resolution. It also has Corning Gorilla Glass 3 for protection which should keep it from picking up scratches too easily. The display has good viewing angles and is legible when outdoors. There are two colour profiles to choose from, and you can also change the white balance.

Samsung has retained the Exynos 9611 SoC from the Galaxy M30s. This is an octa-core processor with four performance ARM Cortex-A73 cores clocked at 2.3GHz and four efficiency Cortex-A53 cores clocked at 1.7GHz. For graphics, it has the Mali-G72 GPU. You get 6GB of RAM and a choice between between a 64GB storage variant and a 128GB storage variant for Rs. 15,999 or Rs. 16,999 respectively. However, Samsung is offering a Rs. 1,000 discount which brings the prices down to Rs. 14,999 and Rs. 15,999 respectively. The duration of this offer has not been specified.

The Galaxy M31 has two Nano-SIM slots and has support for 4G as well as VoLTE. It also supports Wi-Fi, Bluetooth, and GPS. Storage is expandable by up to 512GB.

On the software front, Samsung ships the new Galaxy M31 with OneUI 2.0 on top of Android 10. The software is similar to what we have seen on the recently launched Galaxy S10 Lite (Review) and Galaxy Note 10 Lite (Review). We did find a fair amount of bloatware on Galaxy M31. Apart from the Google apps, Netflix, Facebook, Candy Crush Saga, and Samsung Max were preloaded on the smartphone. Samsung also has its own apps such as My Galaxy and Samsung Shop. We found My Galaxy to be a tad annoying as it kept pushing notifications through the day.

You need to be careful of what you allow while setting up the device, or Samsung will also send you marketing information. The setup process suggests that you download several other apps which we suggest you skip.

The Galaxy M31 does get Android 10 goodies such as Dark Mode and Focus Mode, which can be enabled very easily through the notification shade. Dolby Atmos is available but it only works with earphones. Digital Wellbeing and Parental Controls are also present on the device. Traditional gestures like double-tap to wake, gesture screenshot are present on the Galaxy M31 as well. You also get the option to ditch the three-button navigation layout in favour of full-screen gestures.

Samsung has bumped up RAM on the Galaxy M31 compared to its predecessor which should give it some leverage while multitasking. We did not notice any lag or stutter while using the smartphone. The device is fairly quick to load up apps however big apps do take slightly longer. Since there is plenty of RAM, multitasking is a breeze and we did not find ourselves waiting for an app to load all over again.

The fingerprint scanner is quick to unlock the smartphone, and the selfie camera does a decent job with face recognition. We enjoyed watching content on the AMOLED display. There is Widevine L1 support which should let you stream full-HD content.

We played PUBG Mobile on the Galaxy M31, and the game defaulted to high settings by default with the graphics set to HD and the frame rate to High. The game was playable at these settings and we did not notice any issues. After playing for 20 minutes we noticed a four percent battery drop, and the device did get warm to the touch. The big battery will allow you to play for quite long without needing to plug the smartphone into the charger. In our HD video loop test, it lasted for 22 hours, 31 minutes.

With our usage, the battery lasted us for close to two days without any issues. If battery life is important to you, the Galaxy M31 will not disappoint.

The Galaxy M31 sports a quad-camera setup at the back and a single 32-megapixel selfie shooter. The primary camera on the Galaxy M31 has a 64-megapixel resolution and f/1.8 aperture. This camera takes 16-megapixel binned shots by default but you can switch to the full resolution. There's also an 8-megapixel ultra-wide-angle camera with a 123-degree field of view and an f/2.2 aperture. The other two are a 5-megapixel depth sensor and a 5-megapixel macro camera. Samsung's camera app is the same as before and we could find our way around it very easily. There's a toggle to switch between the primary and the wide-angle cameras. The Scene Optimiser is quick to detect scenes and set the camera up accordingly.

The Galaxy M31 has a rear quad-camera setup

We found the Galaxy M31 to be quick to detect what it's pointed towards and lock focus in daylight. Photos turned out well and had decent details. Text at a distance was legible on zooming in. The smartphone enables HDR automatically if required. Switching to the wide-angle-camera is easy and you can get a wider field of view. However, while these shots look great as is, zooming in reveals that this sensor misses out on details. Wide-angle shots also have barrel distortion at the edges.

The Galaxy M31 is capable of separating subjects and backgrounds when shooting close-ups, giving a natural depth effect. However, we felt that bright colours were reproduced too aggressively, resulting in a loss of detail. The macro camera takes decent shots outdoors but the quality dips when indoors. The output is restricted to 5 megapixels in resolution.

Portrait shots were good and the camera app does give you the option to set the level of blur before taking a shot. Edge detection is very good and the Galaxy M31 does a good job of separating the subject from the background.

Selfies taken with the Galaxy M31 were decent when shot with adequate lighting around, but in low light, the quality goes down a notch and results are grainy.

Video recording maxes out at 4K for the primary rear camera and the selfie shooter. The Galaxy M31 meters light properly when shooting during the day, however, we found that the footage wasn't well stabilised. There is a Super Steady mode that uses the wide-angle-camera and crops the frame to minimise shakes. We got well-stabilised output using this mode, but the video lacked detail. There's no stabilisation at 4K.

Samsung has seen success with the Galaxy M30s, so it didn't want to fix what isn't broken. What the company has done is upgraded the RAM, put in a fourth rear camera, and preloaded Android 10. The Galaxy M31 does not feel like a completely new device, but more like an update to the Galaxy M30s.

The Exynos 9611 is capable but we wouldn't have complained if this phone had a more powerful processor to fend off the competition. The upgrades make this phone slightly better and more versatile, but it isn't a significant step up.

Battery life is still the main highlight, and we could easily go on for two days without needing to be plugged in, something the competition at this price level cannot do very easily. The Redmi Note 8 Pro (Review) and the Realme X2 (Review) will still offer you more bang for your buck overall, but if you don't care for benchmark scores and just want a device that covers the basics and has a great battery, the Galaxy M31 will do just fine.