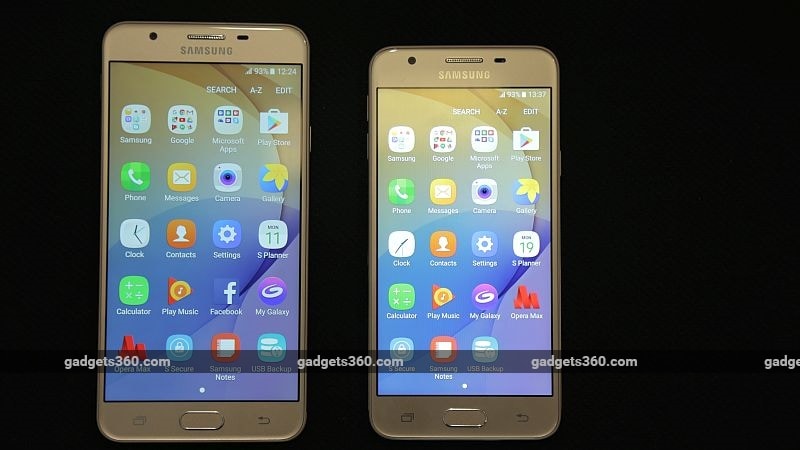 Samsung's Galaxy J-series smartphones have received decent response from the Indian market. The company registered a 10.9 percent growth over the previous quarter and 15 percent growth from the same period last year. According to a recent IDC data, updated versions of the Galaxy J2, J5, and J7 smartphones drove shipments in Q2 2016. The South Korean company, in an attempt to further cash in on the popularity of its J-series, has unveiled two new models - the Samsung Galaxy J7 Prime and Samsung Galaxy J5 Prime.

Both new Samsung smartphones feature the same design, with fingerprint scanners and all-metal bodies. The company is also heavily promoting India-specific "smart" features such as S Power Planning and S Secure which have been developed by Samsung's R&D centres in India.

Talking about the new J-series smartphones, Manu Sharma, Vice President, Mobiles Business, Samsung India told Gadgets 360 that the new "smart" features were inspired by insights from the company's wide range of consumers. Sharma stressed that the new features are 'Make for India' innovations. We spent some time with the new Samsung Galaxy J7 Prime and Samsung Galaxy J5 Prime at a private media briefing on Monday, and here are our first impressions.

S Power Planning includes three features: Reserve Battery Capacity for calls, which allows the user to allocate a certain percentage of the battery for calls and messages; Extend Battery Time, which has three power-saving levels to choose from; and Forward Calls, which lets users forward calls to another number when the phone runs out of power. Extend Battery Time can give users up to twice the usual amount of battery life, as per a Samsung representative, but several phone features are disabled. S Power Planning could definitely come in handy for everyday use, as there will always be times when we forget or are unable to charge our phones ahead of a very busy day.

The second highlight feature is S Secure, which is focused on security and privacy. It includes options to lock and hide apps, secure folders with a fingerprint, and encrypt data being transferred over public Wi-Fi hotspots. The Secure Folder feature has been seen before, on the Galaxy Note 7.

Samsung has also included its S Bike mode on both the new smartphones. S Bike mode made its debut earlier this year on the Galaxy J3 (6) and is based around the core idea that two-wheeler riders should not be distracted by incoming calls. For user convenience, Samsung has placed the S Power Planning, S Secure, and S Bike mode toggles in the Quick Settings panel by default.

The all-metal Samsung Galaxy J7 Prime and J5 Prime both look sturdy. They also both feel slightly heavy for their sizes - the J7 Prime weighs 167 grams and J5 Prime comes in at 143 grams. The front of both phones is 2.5D rounded-edge Corning Gorilla Glass which gives them a premium feel. The signature home button can be seen upfront placed between the Recents and Back capacitive buttons. The home button on both the phones also embed the fingerprint scanner. Each phone has its power button on the right and volume rocker on the left. The 3.5mm audio jack and Micro-USB charging port are on the bottom. There is a company logo on the top above each phone's display, plus more branding at the back. Thanks to the phones' curved edges, we had no issues holding either the J7 Prime or the J5 Prime.

The phones' rears seem plain other than the primary camera and accompanying LED flash on each one. There are two lines running across the top and bottom of the back panel.

Running Android 6.0 Marshmallow, the Galaxy J7 Prime and J5 Prime use Samsung's own TouchWiz skin, and they come with the usual apps from Google. Both models also have Microsoft suite of apps including Office apps and Skype preinstalled, among others. As before, users can delete the Microsoft apps if they choose to. The icons for the dialler, contacts, messages, and browser are pinned on bottom of the display, and the app drawer is to their right. The quick settings panel includes the usual toggles for Bluetooth, Wi-Fi, cellular data, torch, power saving, flight mode, and more. Samsung might have cut down on the number of its own apps but a few still made it to the device, including MyGalaxy and Samsung Notes.

The Galaxy J7 Prime features a 5.5-inch full-HD (1080x1920-pixel) IPS display with 2.5D Corning Gorilla Glass, and it runs on a 1.6GHz octa-core processor coupled with 3GB of RAM. The screen looked bright and crisp. We found legibility to be decent even in direct sunlight, with good viewing angles.

The Galaxy J5 Prime features a 5-inch HD (720x1280-pixel) IPS display with 2.5D Corning Gorilla Glass, and runs on a 1.4GHz quad-core processor coupled with 2GB of RAM. The display on the J5 Prime was also vibrant and bright, with decent visibility under the sun. We feel that of the two phones, the J7 Prime has a better screen. Both the phones supports dual-SIMs.

The Galaxy J7 Prime sports a 13-megapixel rear camera with f/1.9 aperture and an LED flash. There is an 8-megapixel front camera as well. In our brief camera tests, we found images taken with the J7 Prime in normal indoor lighting to be crisp with decent colour reproduction on the phone's screen. The front camera was able to take good selfies. The Galaxy J5 Prime also sports a 13-megapixel rear camera with autofocus, f/1.9 aperture and an LED flash, but has a 5-megapixel front camera. We found the images clicked by J5 Prime under artificial lighting to also be quite crisp, with a good amount of detail. We did however notice slight blurring in the corners of images. The front camera took decent shots. Even so, do stay tuned for our detailed J7 Prime and J5 Prime review, when we will really get a chance to test the camera under varied conditions.

The Samsung Galaxy J7 Prime and Galaxy J5 Prime have been launched at Rs. 18,790 and Rs. 14,790 respectively. The Galaxy J7 Prime is now available in India while the J5 Prime will go on sale by end of this month.