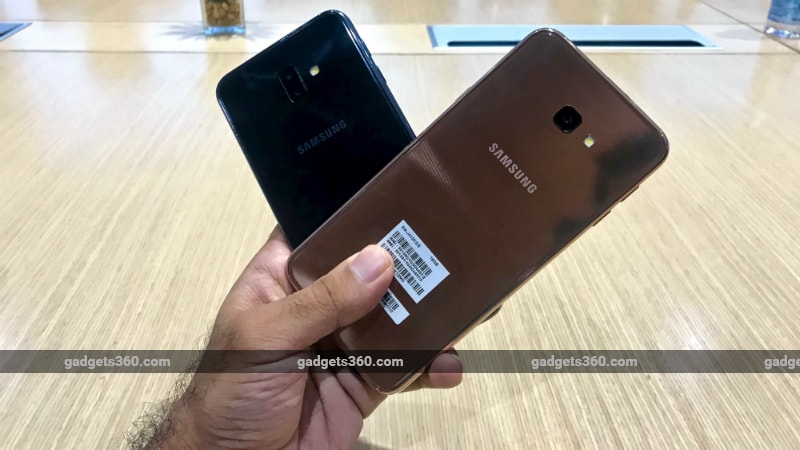 The Samsung Galaxy J4+ and Galaxy J6+ are the South Korean phonemaker's latest mid-range models for the Indian market. These upgraded "Plus" models have arrived within months of the Galaxy J4 and Galaxy J6. Both new models offer similar specifications and share quite a few design elements, though the Galaxy J6+ has a few additional features that make it slightly more premium. The Samsung Galaxy J4+ price in India is Rs. 10,990 for the sole variant with 2GB RAM and 32GB storage, and the Galaxy J6+ comes in at Rs. 15,990 for the 4GB RAM/ 64GB storage model in the Indian market.

They will compete with a barrage of offerings from Xiaomi, Asus, Honor, Oppo, and Vivo. Two of the most popular phones in the Rs. 10,000-20,000 price segment are the Asus ZenFone Max Pro M1 and the Xiaomi Redmi Note 5 Pro. Can Samsung create a niche for itself in this segment? We got to spend some time with the Samsung Galaxy J4+ and Galaxy J6+ ahead of their launch in India and here are our first impressions.

With the Samsung J6+, Samsung is bringing a dual rear camera setup to a tempting price point with the Galaxy J6+. The Galaxy J4+, however, makes do with a single rear camera. The rear camera modules on both these phones appear weirdly tiny, especially when you compare them to the massive 6-inch displays that both of them sport. The Infinity Display panels feature the HD+ resolution of 720x1480 pixels, for an 18.5:9 aspect ratio. We had no issues with their display quality or brightness. The South Korean manufacturer has had an impressive track record when it comes to displays, and the latest Galaxy J series models seem to carry that forward.

Starting off with the Samsung Galaxy J4+, the front is devoid of any physical or capacitive buttons, and instead, Samsung has used on screen buttons. The left of the smartphone has the volume buttons, a slot for one Nano-SIM, and another slot for a Nano-SIM and a microSD card. Samsung claims that the maximum microSD card capacity supported on both phones is 512GB, which should be more than enough for anyone.

On the right, the Galaxy J4+ has the lock/ power button and a small speaker. A Micro-USB port, 3.5mm headphone jack, and microphone are placed on the bottom. Lastly, on the back is a single 13-megapixel rear camera with an f/1.9 aperture, coupled with an LED flash.

The Galaxy J6+ is almost identical in design, except that it has a larger power button with an integrated fingerprint sensor. It also has a dual camera setup at the back, comprised of a 13-megapixel primary sensor with an f/1.9 aperture, and a 5-megapixel secondary sensor with an f/2.2 aperture.

Expectedly, the Galaxy J6+ offers Live Focus capabilities for bokeh shots. The Galaxy J4+ appears to sport the same primary camera but in our brief time with the two phones, it seemed that the Galaxy J6+ took better photos, even in good light. Do wait for our full reviews, coming up soon, in which will judge the camera performance of both new phones extensively.

The Samsung Galaxy J4+ and Galaxy J6+ both have bodies with rather reflective glass on the back. The Galaxy J4+ has been launched in a Gold colour option that we felt looked a bit tacky, and made our demo unit extremely prone to smudges.

The Samsung Galaxy J6+ is the first phone from Samsung to sport a fingerprint sensor integrated into the power button on the side. We found the fingerprint sensor to be snappy and accurate for the most part during our brief initial testing period. Both phones offer face recognition, but the Galaxy J4+ did not seem to be able to register faces which might be due to the fact that these were sample units running pre-release software. We hope to see improved performance when we receive this phone for a full review.

The Samsung Galaxy J4+ and Galaxy J6+ are both powered by Qualcomm's Snapdragon 425 SoC, which is easily one the most disappointing aspects of both phones. To put things in perspective, the same SoC powers last year's Xiaomi Redmi 5A, which has a starting price of Rs. 5,999. However, the UIs of both phones seemed fluid in our brief time with them. We will follow up with extensive benchmarking as well as evaluating real-world usage.

Much like other Samsung smartphones, the two new Galaxy J models arrive with heaps of pre-installed apps and plenty of customisations. For starters, there is a Samsung clone for most Google apps - including Calendar, Notes, Gallery, etc. The phones also feature Samsung Pay Mini and S Bike Mode, which are unique offerings that could give Samsung a slight edge in terms of appeal in the crowded Android smartphone market.

There are preloaded Google apps including Gmail, Chrome, Drive, and Play Music, as well as Microsoft Excel, Word, PowerPoint, and OneDrive. One feature that Samsung highlights is that both phones support Widevine L1 DRM which enables content protection for HD video streaming services. This was recently found to be missing from Xiaomi's Poco F1.

Stay tuned to Gadgets 360 for extensive reviews of both, the Samsung Galaxy J6+ and the Galaxy J4+, in which we will test their construction quality, displays, software, performance, battery life, and cameras.