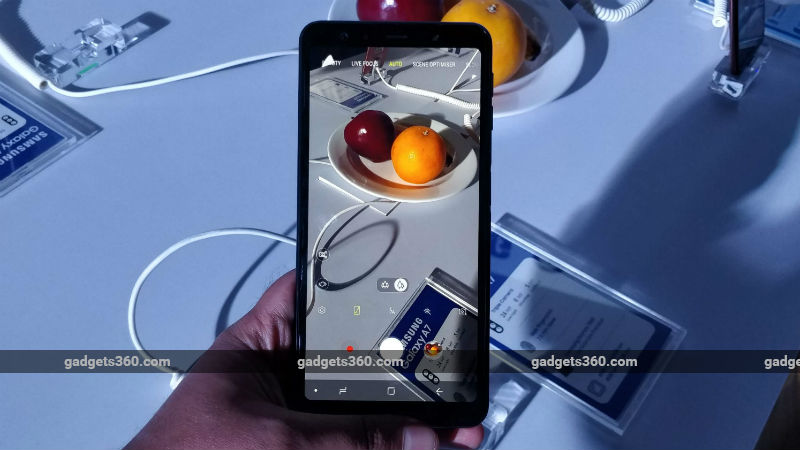 Both will go on sale via Flipkart, Samsung's own online store, and the Samsung Opera House, on Thursday, September 27 and Friday, September 28, after which they will be available in open sale offline and online.

There are some interesting new features in this mid-range smartphone, but will they be enough to make it competitive against the likes of the OnePlus 6 (Review), Oppo F9 Pro (Review), Vivo V11 Pro (Review), Poco F1 (Review), Nokia 7 Plus (Review), Asus ZenFone 5Z (Review), and Honor 10 (Review), among others? Gadgets 360 got to spend some time with the Galaxy A7 (2018) at its launch event in India, and here are our first impressions.

The build quality of the mid-range Galaxy A7 (2018) did not feel particularly premium, but this is still a good-looking device. Samsung has launched it in three colour options - black, blue, and gold - and we found that the Gold variant has a pinkish tinge to it, putting it more in the rose gold territory. This smartphone weighs 168g and is just 7.5mm thick, but is still fairly easy to use one-handed. Notably, the handset appears to be a bit wider than other smartphones in the Galaxy A lineup. The Galaxy A7 (2018) has a back made of rather reflective glass, which we felt looked a bit tacky, and was extremely prone to picking up smudges. In the short time we spent with this phone, the fingerprint sensor embedded in the power button on the right seemed to be snappy and accurate for the most part. The volume buttons are also on the right. There are slots for two Nano-SIM cards and a dedicated slot for a microSD card on the left.

The Galaxy A7 (2018) sports a 6-inch full-HD+ (1080x2220 pixels) Super AMOLED display with an aspect ratio of 18.5:9. Samsung calls it an Infinity Display, and in our initial impressions we found it quite impressive. It has good viewing angles and natural colour reproduction. It was a relief to see that Samsung has not introduced a notch. While the display is not exactly borderless, this phone does look quite modern when seen from the front. An in-depth analysis of the display will be available in our full review.

The most attractive feature of the Galaxy A7 (2018) is its three cameras at the back, a first from Samsung. It is clear that the company wants to push the popularity of its Galaxy A-Series to capture the market between its Galaxy J and S series. Of the three cameras, one has a 24-megapixel sensor with an f/1.7 aperture; the second has an 8-megapixel sensor and ultra-wide lens with an f/2.4 aperture; and finally there's a 5-megapixel depth sensor with a fixed-focus lens and f/2.2 aperture. The highlight here is the 8-megapixel sensor as it has a 13mm 'ultra-wide' lens with a 120-degree field of view. The 5-megapixel sensor is a Live View sensor that is meant to capture information to create depth-of-field effects. Also, the Galaxy A7 (2018) is equipped with a 24-megapixel fixed-focus front camera, with an f/2.0 aperture and an LED flash.

In our limited experience with this smartphone, images shot with the rear cameras in favourable lighting showed a decent amount of detail and vivid colours. We will have to reserve our judgement about whether the extra camera really improves the photographic capabilities of this phone, till we can spend enough time with it to conduct our full review. The selfie camera also seemed to be able to capture decently sharp images in favourable settings.

The Samsung Galaxy A7 (2018) is powered by Samsung's own Exynos 7885 processor, clocked at 2.2GHz. This could be a potential weakness, as rival mid-rangers such as the Poco F1 and ZenFone 5Z use the powerful Qualcomm Snapdragon 845 SoC. Flipping through the UI of the smartphone was fluid in the little time we spent with it. Extensive benchmarking along with real-world usage evaluations are coming up soon in our full review of the Galaxy A7 (2018).

As stated, the smartphone comes in 4GB RAM/ 64GB storage and 6GB RAM/ 128GB storage variants. The internal storage is expandable using a microSD card (up to 512 GB). Samsung allows users to install apps onto the microSD card, so you should definitely use a fast one if you're planning to take advantage of that.

The Samsung Galaxy A7 (2018) runs Android 8.0 Oreo (not even Android 8.1) along with the Samsung Experience 9.0 UX on top. With Android 9.0 Pie already rolling out on several smartphones, the company could do better. Besides that, similar to most Samsung smartphones, the Galaxy A7 (2018) comes with a plethora of preinstalled apps and customisations. There are several duplicates of Google's apps, such as Gallery and Notes. There's also S Bike Mode and S Power Planning, unique features that Samsung leverages to try and stand out in the saturated Android market.

The Galaxy A7 (2018) has 3,300mAh battery under its hood, and battery life should be good considering that this phone also has a Super AMOLED display and a power-efficient processor. We will test battery life as part of our upcoming review. Other specifications include 4G VoLTE, dual-band Wi-Fi 802.11ac, Bluetooth 5, ANT+, NFC with Samsung Pay support, GPS, GLONASS, Beidou, and a 3.5mm headphone jack.

With a promising set of cameras and newly positioned fingerprint scanner, this smartphone looks like it could be a serious contender in its price segment. Do stay tuned to Gadgets 360 for our extensive review of Samsung Galaxy A7 (2018), coming up soon, in which we will thoroughly test its cameras, build quality, display, performance, software, and battery life.