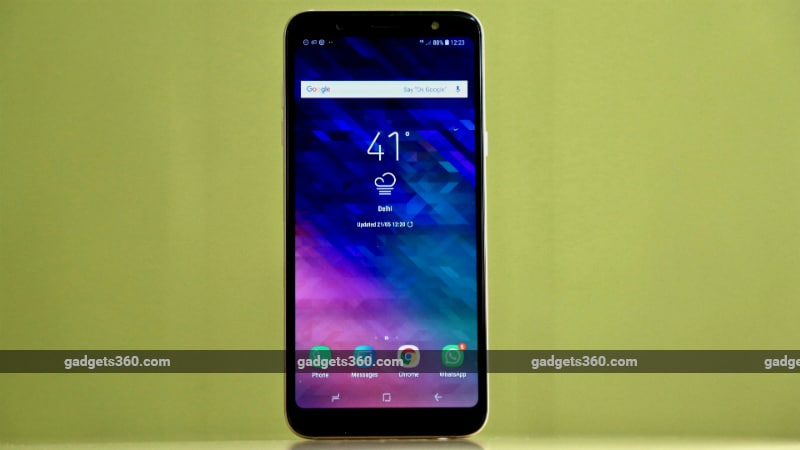 Taller, narrower displays are fast becoming ubiquitous. Almost the entire smartphone industry has released or is in the process of releasing smartphones with minimal screen borders and 18:9 or taller displays. The Samsung Galaxy S8 (Review) was the first smartphone to embrace this trend head-on, calling its new screens Infinity Displays. Since then, the company has slowly and steadily been overhauling its entire range. After the launch of the Galaxy A8+ (Review) a few months ago, the company has launched the Galaxy A6+ and Galaxy A6, both of which feature 18.5:9 Super AMOLED displays.

With an Infinity Display of its own plus Android 8.0 Oreo out of the box, a metal unibody, and dual rear cameras, the Galaxy A6+ looks quite promising. We got to spend a few days with this smartphone prior to the official Indian launch, and here are our first impressions.

This mid-range smartphone feels quite premium, thanks to its metal body. The screen is not exactly borderless but the front does look contemporary. The Galaxy A6+ is quite heavy and wide, which makes one-handed use very difficult. The fingerprint sensor is located right below the rear dual camera setup and is accurate but slow. Its location is also quite hard to reach and we constantly found ourselves hitting the camera sensors instead. Face recognition is supported but this was also sluggish in our limited experience.

The Galaxy A6+ has a 6-inch full-HD+ (1080x2220-pixel) Super AMOLED display with an aspect ratio of 18.5:9. In our short time with this smartphone, we found the display to be one of its highlights, with good viewing angles, punchy colours, and deep blacks. We are glad to see that Samsung has not equipped the Galaxy A6+ with a notch, which not everybody likes. An in-depth analysis of the display will have to wait till our full review.

The Galaxy A6+ is powered by the octa-core Qualcomm Snapdragon 450 processor clocked at 1.8GHz. The smartphone is only available in one variant, with 4GB of RAM and 64GB of internal storage, which can be expanded using a microSD card (up to 256GB). Other specifications include a 3,500mAh non-removable battery, and Android 8.0 Oreo with Samsung Experience 9.0 on top.

In the few days we used the smartphone, it handled casual tasks such as browsing the Web and using social media apps relatively smoothly, but struggled when pushed. With a multitude of apps open in the background, a noticeable amount of lag and stutter crept in. Samsung's Experience skin is relatively fluid but is beginning to become as bloated as TouchWiz used to be. There are a host of Samsung applications that compete with Google's own, as well a suite of Microsoft apps that cannot be uninstalled. On a positive note, most first-party applications were able to run smoothly at the screen's 18.5:9 aspect ratio.

The Samsung Galaxy A6+ has a nifty feature called 'Chat over Video' that allows users to carry on conversations in WhatsApp and the default messaging app whilst watching videos. The feature, which Samsung claims has been developed by its Indian R&D team, overlays a translucent chat window and keyboard over the video being played. There is also a storage management tool that can help you move data to a microSD card, delete duplicate images, compress unused apps, and delete downloaded APK files.

The A6+ can intelligently detect objects or scenes being shot, and optimise camera settings accordingly. A new feature called Live Bokeh allows users to preview the intensity of the depth-of-field effect before taking a photo. There are also augmented reality effects on board in the form of AR stickers, which can be used with both the front and the rear cameras.

In our limited experience, the AR effects seemed to work well, and pictures shot with the rear camera in favourable lighting had a decent amount of detail and vivid colours. We will be testing the quality of videos as well as photos taken in low light in our full review, coming up soon.

The Samsung Galaxy A6+ is priced at Rs. 25,990 in India, and it will go on sale starting May 22 via Paytm Mall, the Samsung India E-Store, Amazon India, and also Samsung's offline retail stores. While the Galaxy A6+ is quite feature-packed, it costs the same as the Nokia 7 Plus (Review), which got top marks from us at Gadgets 360, and has a more powerful processor. We will have to test this phone extensively to see how it fares against the competition. Stay tuned to Gadgets 360 for our in-depth review of the Galaxy A6+.