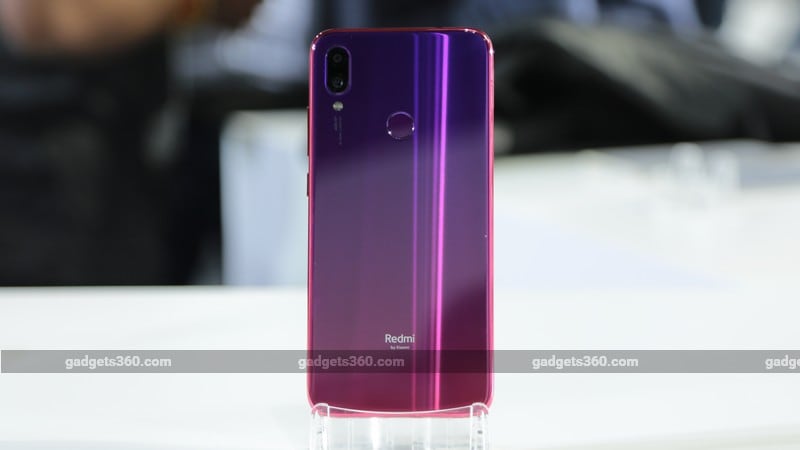 Xiaomi has gone for unapologetically flashy designs for both these new smartphones, and has finally introduced gradient patterns, which are currently en vogue, to the Redmi series. The Redmi Note 7 Pro comes in Space Black, Nebula Red and, Neptune Blue colour options, with the latter two flaunting an eye-catching gradient finish — something Xiaomi calls Aura Design. On the other hand, the Redmi Note 7 has a reflective body and comes in an understated Onyx Black colour option as well as Ruby Red and Sapphire Blue variants. The latter two reflect light off the rear panels and look beautiful. Xiaomi has certainly gone with a bold colour palette, and this bet has paid off handsomely.

There is of course plenty of substance to go with all that flash. Both Redmi Note 7 Pro and Redmi Note 7 feature a layer of 2.5D curved-edge Corning Gorilla Glass 5 on their front as well as rear panels, and a P2i hydrophobic nano-coating is claimed to protect the smartphones against accidental liquid spills. Xiaomi claims that both models have reinforced corners and also feature watertight seals beneath the button areas and in a few other spots. Except for the colours on their glassy rear panels, both Redmi Note 7 Pro and Redmi Note 7 have similar profiles with the ports and buttons in the same places.

On the right of both models are the volume and power buttons, which provide satisfactory tactile feedback and don't feel mushy. The left sides host each phone's hybrid dual-SIM + microSD card slot. Both Redmi Note 7 Pro and Redmi Note 7 have 3.5mm headphone jacks and IR emitters on top, and USB Type-C ports on the bottom flanked on both sides grilles. Overall, we found the Redmi Note 7 and the Redmi Note 7 Pro to be good-looking, sturdy, and easy to handle — a combination of traits that buyers will certainly appreciate.

The front fascias of both the Redmi Note 7 and the Redmi Note 7 Pro are dominated by 6-3-inch full-HD+ (1080x2340 pixels) LTPS In-Cell displays with 19.5:9 aspect ratios. The panels are claimed to be TUV-certified for reducing blue light exposure. Both phones have somewhat thick chins and small notches — "Dot Notches", in Xiaomi's words — sits at the top. The displays' colour reproduction and brightness appeared fine in our short time spent with these two phones, but we found them a tad too reflective, especially under bright indoor lighting.

The Redmi Note 7 Pro is powered by the octa-core Qualcomm Snapdragon 675 SoC, and has up to 6GB of RAM and 128GB of internal storage which can be expanded by up to 256GB with a microSD card. In the imaging department, the Redmi Note 7 Pro packs a 48-megapixel primary sensor (Sony IMX586) paired with a 5-megapixel depth sensor, while selfies are taken care of by a 13-megapixel front camera.

The Redmi Note 7 has the octa-core Qualcomm Snapdragon 660 processor at its heart, with up to 4GB of RAM and 64GB of internal storage which can also be expanded by up to 256GB. The imaging hardware on this model comprises of a 12-megapixel primary camera and a 2-megapixel depth sensor, plus a 13-megapixel front camera for selfies.

Both the smartphones feature full-HD+ panels with a "Dot Notch"

Both these smartphones pack 4,000mAh batteries and support the Qualcomm Quick Charge 4.0 standard. On the software side, they both run MIUI 10 based on Android 9 Pie.

We briefly navigated through the UI and found a lot of preinstalled apps, including both in-house and third-party ones. We found both smartphones to be zippy, with apps loading quickly and animations appearing smooth, but we will save our final opinions for our in-depth reviews.

We will soon thoroughly assess parameters such as photo quality, day-to-day performance, battery life, and most importantly, the overall usage experience, so stay tuned to Gadgets 360 for reviews of the Redmi Note 7 Pro and Redmi Note 7.

Rotten Tomatoes Shuts Down Trolls Targeting Female-Led Blockbusters
Spotify’s India Catalogue Compared to Spotify US: Which One Is Better?