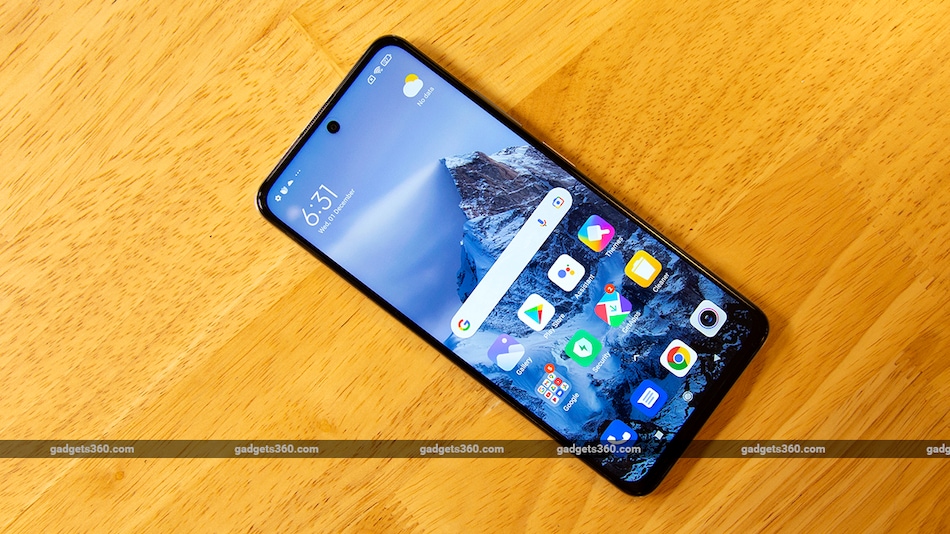 So, do all these features help the Redmi Note 11T 5G stand out? I put the phone to the test to find out.

The Redmi Note 11T 5G carries forward the company's EVOL design language, which makes it familiar and recognisable. It has a big display with a hole for the front camera, and fairly thin bezels at the top and sides while the chin is thicker. The frame and the back panel are made of plastic but feel sturdy.

You'll notice the 195g weight when you pick this device up, but it is manageable. The Redmi Note 11T 5G has its power and volume buttons on the right. These are within reach when holding the device. The power button has an integrated capacitive fingerprint scanner which makes it easy to unlock this phone. On the other side, you'll only find the hybrid dual-SIM tray. Xiaomi has gone with stereo speakers on the Redmi Note 11T 5G; the grill on the top is positioned next to the secondary microphone and the IR emitter. At the bottom, the primary speaker is accompanied by the USB Type-C port, primary microphone, and 3.5mm audio jack.

The back panel only has the camera module, and it protrudes slightly. It's big and might give the impression of a quad-camera setup, but it only houses two cameras. This is surprising since most phone manufacturers have been adding depth sensors and macro cameras to inflate the camera count for a while now.

I liked the Stardust White colour variant that I received for this review for its striking looks. I also found that the back panel hides smudges quite well. Xiaomi provides a case in the box as well as a 33W charger to top up the big 5000mAh battery quickly. The Redmi Note 11T 5G is also IP53 rated for dust and splash resistance.

The highlight of the Redmi Note 11T 5G is its MediaTek Dimensity 810 SoC. This octa-core chip has two ARM Cortex-A76 cores clocked at 2.4GHz as well as six ARM Cortex A55 cores clocked at 2GHz. The lower-priced variants of the Redmi Note 11T 5G get 6GB of RAM with either 64GB or 128GB of storage. The higher-end variant has 8GB of RAM and 128GB of storage, and this is the one I had for this review. Xiaomi has added a memory extension feature which claims to use up to 3GB of storage space as additional RAM. This Virtual RAM feature was enabled by default on my device. You do get expandable storage, but it comes at the cost of the second Nano-SIM, since this phone has a hybrid dual-SIM slot.

The big 6.6-inch display sports a full-HD+ resolution, a 90Hz refresh rate, and Corning Gorilla Glass 3 for protection. The refresh rate changes dynamically between 50Hz, 60Hz, and 90Hz based on the content on screen. I found the phone set to 60Hz by default, so you'll need to enable this manually. The Redmi Note 11T 5G is dual 5G capable, and also supports dual 4G VoLTE, Bluetooth 5.1, and dual-band Wi-Fi.

In terms of software, the Redmi Note 11T 5G runs MIUI 12.5 on top of Android 11, and my unit had the November Android security patch. MIUI is customised and lets users personalise it further. You still get a fair number of preinstalled apps on the phone including Xiaomi's own Mi Credit and Mi Pay, but many of them can be uninstalled. Xiaomi has the three-button navigation layout enabled by default, but you can switch to gestures if you like. The power button can also be configured to perform an action when double-tapped.

The Redmi Note 11T 5G has a crisp display, and it does get bright enough when outdoors. The refresh rate was set to 60Hz by default but bumping it up to 90Hz made animations and scrolling appear smoother. There are different display modes such as Vivid, Saturated, and Standard to choose from, and you can also tweak the colour temperature of the panel. The dual speaker setup isn't balanced, and I found the bottom speaker to be considerably louder than the one on the top.

I did not notice any lag or stutter while using the phone, and multitasking between different apps was effortless. The side-mounted fingerprint scanner is convenient and quick.

Since the Redmi Note 11T 5G is built for performance, I loaded up Battlegrounds Mobile India (BGMI) which ran at the HD graphics and High frame rate settings by default. The game was playable at these settings without any stutter. After about 16 minutes, I noted a 5 percent drop in the battery level and the phone was slightly warm to the touch. If you are looking for a gaming device on a budget, the Redmi Note 11T 5G does pack a punch.

Battery life was good, and this phone lasted me over a day and a half without any issues. I observed the idle battery drain to be low, which should help it last longer when not in active use. The 5,000mAh battery managed to get the phone to 16 hours and 32 minutes in our HD video loop test. The refresh rate was set to 90Hz during this test. Charging with the supplied 33W fast charger was quick – the phone got to 56 percent in 30 minutes and got to 97 percent at the one hour mark.

The Redmi Note 11T 5G has a 50-megapixel primary camera and an 8-megapixel ultra-wide angle camera; it does not have a depth sensor or macro camera. The missing sensors aren't a deal breaker, unless you enjoy taking macro photos. For selfies, it has a 16-megapixel front shooter in the hole-punch cutout. The camera app is familiar and all the different shooting modes are laid out logically. There are quick toggles for HDR and AI scene detection as well.

The Redmi Note 11T 5G was quick to lock focus and set the exposure correctly. Daylight shots looked good on the phone's screen, but magnifying them later revealed average details. The phone seems to over sharpen photos, leading to a loss in detail in the shadows. The ultra-wide angle camera does help you capture a wider field of view, but its output isn't as detailed as that of the primary camera. I also noticed distortion in a few shots, in spite of distortion correction being enabled by default.

You can take shots with the primary camera at its full 50-megapixel resolution but details were only marginally better. These photos also looked oversharpened.

Close-up shots fared better and the Redmi Note 11T 5G did manage to capture textures well. It adds a soft blur to the background even without Portrait mode, helping the subject stand out. Portrait shots had good edge detection, and you can set the level of blur before taking a shot. Surprisingly, portrait shot files were 8MB-10MB each, approximately three times the size of a regular shot.

Low-light shots were average but the colour tone was slightly off. Objects at a distance did not have the best details either. It took 3-5 seconds to take a shot in Night mode, but these photos had better colour and marginally better details.

Selfies shot in daylight had good detail and the Portrait mode managed good edge detection. Low-light selfies with a light source nearby also turned out well.

Video recording tops out at 1080p 60fps which is rather surprising since the older Redmi Note 10S can record in 4K. Footage shot in daylight was well stabilised, but shimmer was visible in low-light footage.

The Redmi Note 11T 5G is the first smartphone in the Redmi Note 11 series to launch in India. Just like its predecessor, the Note 11T 5G is clearly focussed on performance. The Dimensity 810 SoC is powerful and also supports 5G which should be a selling point when networks finally roll out here. MIUI 12.5 isn't as spammy as previous versions but this phone still comes with a sizable number of preinstalled apps. Finally, the big 5,000mAh battery delivers good battery life and the 33W fast charging capability helps keep charge time relatively low.