Is this the best smartphone if you are on a tight budget? 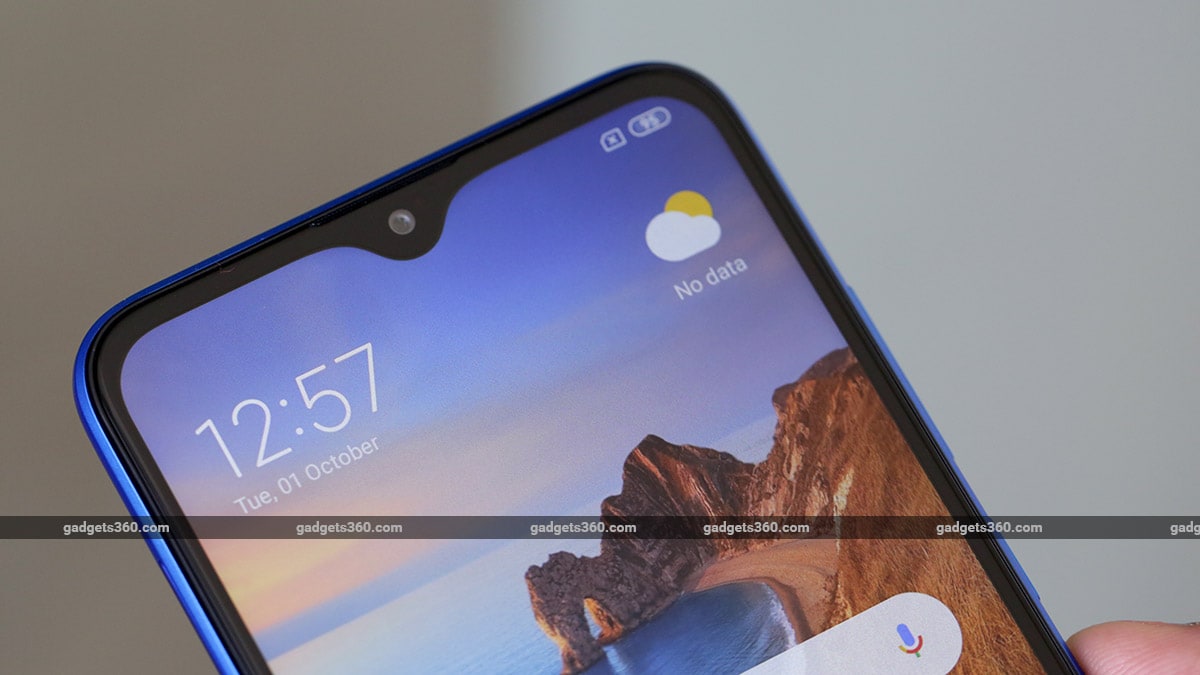 There is no doubt that the Redmi series from Xiaomi is very popular in India. This series catered only to the low end of the market when it was introduced, but has now expanded wide enough to encompass high-end devices at aggressive prices. While it now includes phones like the Redmi K20 Pro (Review), it still caters to budget-conscious buyers as well.

Dubbed the “smart desh ka smartphone” the Redmi 7A (Review) had a lot of expectations to shoulder when it was launched three months ago at its rather low Rs. 5,999 price point. Surprisingly, Xiaomi has brought out an update to this smartphone a mere three months after its launch, and has aptly called this new model the Redmi 8A. The new Redmi 8A sports a USB Type-C port and packs in a big 5,000mAh battery. Will these impressive specs translate to a high-quality usage experience? We put the new Redmi 8A through its paces to find out.

One glance at the Redmi 8A and it is hard to believe that this is such an affordable smartphone. Xiaomi has done a good job of designing this device, which is priced below Rs. 7,000. The front of the Redmi 8A has a big 6.22-inch display with a waterdrop notch at the top. This is much bigger than the 5.45-inch display on the Redmi 7A. Xiaomi has pushed the earpiece towards the frame of the device. The Redmi 8A has noticeable bezels on all sides. The chin is quite thick and Xiaomi has put a Redmi logo here.

Xiaomi has curved the sides of the Redmi 8A, which makes it comfortable to hold. The power and volume buttons are to the right and are easy to reach. Xiaomi has positioned the SIM tray on the left which is otherwise bare. The top and bottom of the phone are flat and you can see a secondary microphone at the top. At the bottom, the Redmi 8A sports a USB Type-C port, which is great to see on a smartphone in this price bracket. The 3.5mm headphone jack, the primary microphone, and the loudspeaker are also on the bottom.

The back of the Redmi 8A only has a single camera with an LED flash. There is no fingerprint sensor on this device, something we can potentially excuse given its price.

Redmi 8A specifications and software

Xiaomi has slowly been bumping up the battery capacities of phones in this series. The Redmi 6A (Review) shipped with a 3,000mAh unit, and now the Redmi 8A packs in a significantly bigger 5,000mAh battery. The Redmi 8A also supports 18W fast charging, but Xiaomi ships only a 10W charger in the box.

The Redmi 8A has two Nano-SIM slots and a dedicated microSD slot for storage expansion. There is support for 4G as well as VoLTE on both SIMs as well as Bluetooth 4.2, Wi-Fi 802.11b/g/n, and four satellite navigation systems. The Redmi 8A also has wireless FM functionality, so you won't have to plug a headset in to listen to FM radio.

In terms of software, the Xiaomi Redmi 8A runs MIUI 10 on top of Android 9 Pie. Our unit was running the August security patch. The interface is similar to what we have seen on other Xiaomi phones. There is no app drawer, and all app icons are placed on the home screens. There is a fair amount of bloatware pre-installed, including Mi Community, Paytm, Mi Credit, Mi Store, Amazon, Facebook, WPS Office, Dailyhunt, Gaana, and Opera Mini. This phone also has games called Ludo Master, Block Puzzle Guardian, Pop Shooter Blast, and Dust Settle pre-installed. There's even an app store called GetApps which can be used as an alternative to the Google Play Store.

The Redmi 8A is plagued by the same spammy notifications as other Xiaomi devices. We saw ads while installing new applications and also found that stock apps including Mi Music and Mi Video constantly generated spammy notifications. On the other hand, MIUI has a few useful features such as Dual Apps which lets you run two instances of supported apps. Google's Digital Wellbeing feature lets you monitor how you spend time on your smartphone, and you can also set up parental controls using Google's Family Link.

Gesture navigation is an option, and you can use this instead of the traditional three-button navigation layout. App Lock is built in, and you can lock down apps with a passcode or face recognition. There is also a Game Speed Booster app which claims to carry out performance optimisations and give more bandwidth to the app running in the foreground. You can also disable auto-brightness and the notifications shade swipe gesture while gaming.

Redmi 8A performance and battery life

The Redmi 8A has decent enough hardware to deliver a usable experience. We rarely observed slowdowns while using the smartphone, but heavy apps took longer to load. We had the base 2GB RAM variant for our review, and it could not keep many apps running in the background, which meant they had to be restarted each time we tried using them. There is no fingerprint sensor but face recognition is quick enough to unlock the smartphone conveniently.

The display on the Redmi 8A has decent viewing angles, and the speaker gets loud enough to enjoy content on. However, sunlight legibility could have been better, as we found ourselves shielding the phone quite often to see what was on the display when outdoors.

We already have a good idea of how the Qualcomm Snapdragon 439 SoC performs, thanks to our experiences with the Redmi 7A (Review). The Redmi 8A isn't significantly different. We had issues running our standard set of benchmarks, which is most likely a restriction on early units to prevent performance-related information from leaking.

The Redmi 8A could run AnTuTu Benchmark and posted a score of 76,509, and also managed 4,594 in PCMark Work 2.0. These scores are in the same range as those of the Xiaomi Redmi 7A. The Snapdragon 439 SoC's scores were higher than those posted by phones using the MediaTek Helio P22 SoC, such as the Realme C2 (Review). We could not run any graphics benchmarks on the Redmi 8A.

We were looking forward to putting the big 5000mAh battery in the Redmi 8A to the test. In our usage, which consisted of an active WhatsApp account, taking a few camera samples, using Google Maps for navigation for two hours, and running a few benchmarks, we were able to get through a full day and we still had a little over 50 percent left in the tank. The phone managed to keep idle drain low, which helped the battery deliver excellent performance. In our HD video loop test, the Redmi 8A lasted for 16 hours and 31 minutes.

With the supplied 10W charger, the phone charged up to 25 percent in 30 minutes and 46 percent in an hour. It took around 2 hours and 30 minutes to charge the phone completely. The Redmi 8A supports 18W fast charging, and Xiaomi sells an 18W charger for Rs. 449. We think you should invest in one of these if you are buying this smartphone.

The Redmi 8A has a single camera at the back, based on the Sony IMX363 sensor. This is a 12-megapixel sensor and has been used in the likes of the Google Pixel 3 (Review) as well as the Poco F1 (Review). This camera has an f/1.8 aperture, a 1.4-micron pixel size, and dual-pixel autofocus. At the front, the Redmi 8A has an 8-megapixel selfie shooter with an f/2.0 aperture and 1.12-micron pixels. Xiaomi has used the same camera app as always, and you get shooting modes such as Portrait, Pro, and Short Video apart from the usual photo and video modes. There is HDR as well as AI scene detection.

We found the Redmi 8A to be quick to focus during the day, but the speed dropped in low light. In favourable light, the Redmi 8A delivered some good shots, details were lacking when we zoomed in to the sample shots. HDR kicks in automatically when shooting in bright environments, but we did notice ghosting in a few shots taken during the day.

For close-ups, we noticed that the camera managed to create a decent natural depth of field. The AI in the camera app is quick to detect what it is pointed towards, which helps choose the ideal settings. Photos had decent amounts of detail for a phone at this price, but we would have loved images to have been a little sharper.

Portraits shot with the Redmi 8A had average edge detection but some of our samples had overexposed backgrounds. In low light, there is a noticeable drop in the level of detail and a slight watercolour-like effect. The Redmi 8A managed to keep noise down but sacrificed sharpness in low light. While shooting bright backlit objects at night, we noticed that the device could not capture colours correctly.

Selfies taken during the day had good detail and you can apply beautification filters before taking a shot. In low light, there was a noticeable drop in quality as shots looked grainy on zooming in. Video recording maxes out at 1080p for the primary shooter but lacks stabilisation, so you won't get smooth videos straight off the device.

The Xiaomi Redmi 8A has been launched mere months after the Redmi 7A (Review). While the Qualcomm Snapdragon 439SoC remains the same, many other bits of hardware have been improved upon. The Redmi 8A packs in a bigger display and has improved cameras. Xiaomi has definitely taken a couple of steps in the right direction by opting for a USB Type-C port and packing in a big 5,000mAh battery.

It looks like Xiaomi is repeating history here; it launched the Redmi Note 7S (Review) quickly after the Redmi Note 7 (Review), and has now done the same thing with the Redmi 8A. Yes, this new model is priced marginally higher at Rs. 6,499 than the launch price of the Redmi 7A which was Rs. 5,999. Buyers of the Redmi 7A could feel disappointed considering that the Redmi 8A does everything better for only a slight increase in price. That aside, if you want a budget smartphone or a low-cost secondary device, the Redmi 8A is a solid phone to buy for less than Rs. 7,000.

Adobe Cuts Off Venezuela Clients, Citing US Sanctions
SHAREit Banks on Streaming and Gaming to Stay Relevant in a Post-Jio World