Better value than the OnePlus Nord? 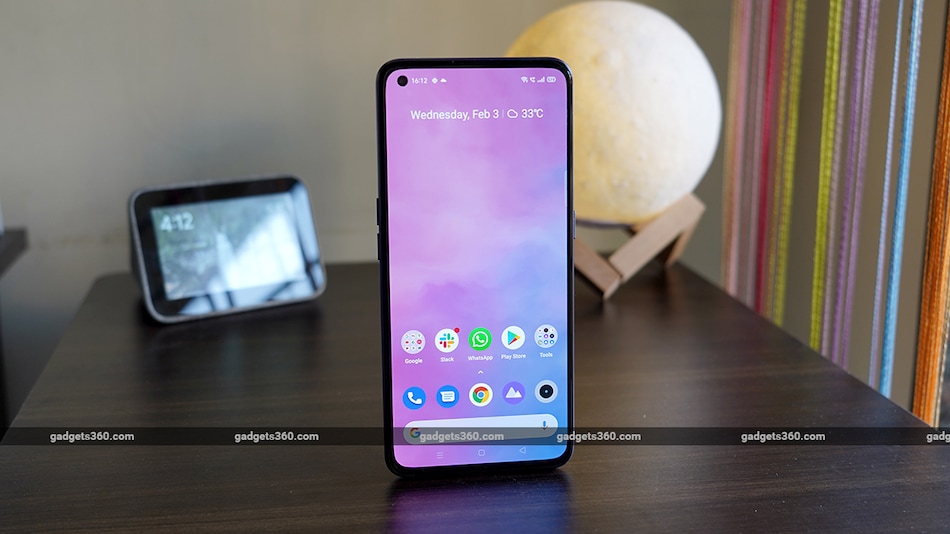 This is one of the first smartphones in India to feature MediaTek's Dimensity series 5G SoCs. It also boasts of a high-refresh-rate display, super-fast charging and plenty of cameras. As far as the competition goes, it takes on phones such as the OnePlus Nord (Review) and the Oppo Reno 5 Pro 5G (Review). So does the X7 Pro 5G offer better value than either of these? Let's find out.

Realme has launched the X7 Pro 5G in India in a single configuration, with 8GB of RAM and 128GB of storage. This is LPDDR4X RAM and UFS 2.1 storage, however there's no support for expandable storage in the form of a microSD card slot. There are two colour options — Mystic Black and Fantasy — of which the latter is the one I have. It has an iridescent glass rear panel and looks quite funky, but I really wish Realme hadn't embossed its slogan on the back. This could have been kept on the bundled case instead. Luckily, the black version doesn't have this writing.

The Realme X7 Pro 5G looks quite similar to the Realme 7 Pro (Review), especially the design of the rear camera module. One-handed use is quite comfortable thanks to the slim body and relatively low weight of 184g. The physical buttons have a good tactile feel and the polycarbonate frame feels sturdy. The glass back and the pre-applied screen protector do pick up a lot of fingerprints, but these are easy to wipe off.

The display is one of the highlights of the Realme X7 Pro, and Realme hasn't held back. It's a 6.55-inch full-HD+ Super AMOLED panel with an in-display fingerprint sensor, 120Hz refresh rate, Gorilla Glass 5, and support for HDR video playback. You get slim bezels around the display and a claimed peak brightness of 1,200nits. This display looks great, touch response is accurate, and content is very legible even under bright lights.

The Realme X7 Pro 5G is missing a headphone socket, but it does come with a Type-C to 3.5mm adapter in the box. The rest of the box contents are a 65W adapter, USB Type-C cable, case, and the SIM eject tool.

Another feature worth noting is the use of MediaTek's Dimensity 1000+ 5G SoC, which we recently saw in action in Oppo's Reno 5 Pro 5G. It's quite a power-efficient SoC with strong CPU and GPU performance. There's also dual-band Wi-Fi ac, Bluetooth 5, NFC, support for five satellite navigation systems, and the usual suite of sensors.

The Realme X7 Pro 5G ran smoothly in the short time I had to test it. I didn't notice any unwarranted heating, system lag, or slowdowns of any kind. The 120Hz display makes usage feel fluid, and the phone will automatically switch between 120Hz and 60Hz based on the app being used. However, it's not adaptive like we recently saw on the Samsung Galaxy S21 Ultra 5G (Review), so even if no touch input is registered, the display will continue to run at 120Hz. This wasn't a very big deal in my experience since it didn't seem to adversely affect battery life too much.

Realme claims that the in-display fingerprint sensor is thinner than one used in its previous models, and in my experience, it works just as well as before. A light touch is all that's needed for a successful unlock. Face recognition is equally quick and works very well even in poor lighting, which has been a running theme on Realme smartphones.

The Realme X7 Pro 5G is still running Realme UI 1.0, based on Android 10. The next version based on Android 11 is still a work in progress, although Realme has started an early access program for some of its smartphones. There's not much that we haven't already seen. Realme UI is quite polished at this point and is easy to get used to. It's still flooded with bloatware, although most of that can be removed. The Browser app in particular is notorious for sending spammy notifications, even if you've never opened the app. You'll have to dive into its settings to disable this behaviour.

Gaming and media performance was excellent. The Realme X7 Pro 5G posted strong benchmark numbers; better than what the Oppo Reno 5 Pro 5G managed. Games such as Oceanhorn and Call of Duty Mobile ran effortlessly, without causing any sort of heating issue. The phone has a vapour chamber cooling system, which seems to be doing its job quite effectively. The X7 Pro 5G has stereo speakers along with Dolby Atmos, which together, produce rich and fairly detailed audio.

Even with heavy use, the 4,500mAh battery easily managed to get me through one full day. The 65W SuperDart fast charging means that this phone can be charged up to 91 percent in half an hour, which is very quick. The Realme X7 Pro 5G lasted for 16 hours, 42 minutes in our HD video loop test, which again, is good.

The Realme X7 Pro has a 4,500mAh battery and supports 65W fast charging

The Realme X7 Pro 5G has a familiar camera configuration which we've seen on some of its previous smartphones. You get a 32-megapixel selfie camera on the front, and at the back, there are four sensors which include a 64-megapixel main camera, an 8-megapixel ultra-wide angle camera, a 2-megapixel monochrome camera, and a 2-megapixel macro camera. You can shoot up to 4K 60fps video but only with the main rear camera. The selfie camera is limited to shooting 1080p video. Other video features include Nightscape for video, AI Colour Portrait, and real-time video bokeh effects — all of which we've seen in previous Realme smartphones.

The Realme X7 Pro 5G captures good details and exposure in landscape shots. HDR is handled well and there's no shutter lag when shooting during the day. I had the ‘AI scene' toggle switched off since I prefer a more natural tone, but if you like punchy colours then you can enable it. The 16-megapixel pixel-binned photos that this phone captures by default offer very good details, even for close-up shots, although you can shoot at the full 64-megapixel resolution if needed. The ultra-wide angle camera has its uses but keep in mind that details are weaker. The monochrome camera is only used when you select the '06' filter in Portrait mode, while the macro camera produces predictably passable results if there's ample light.

While the rear cameras are fairly reliable during the day, they tend to really struggle in low light. Regular low-light shots don't pack in a lot of detail but Nightscape helps in getting better exposures. Even so, I noticed a lot of unwanted noise which made very dark regions look patchy. This is even more pronounced when using Nightscape with the ultra-wide angle camera. The X7 Pro 5G also struggles to focus on close-up subjects in very dark conditions. However, give the sensors enough artificial light and you can get some very usable shots.

Video quality is decent at 4K with good stabilisation, and the autofocus adjusted quickly when I changed my frame. The results were grainy when I was shooting at night, and while the Ultra Night video mode does boost the ISO to make the output brighter, I lost out on texture quality as a result.

The selfie camera manages to capture decent images under good light, however despite turning off the beauty filter, skin tones still ended up looking smoothened. The Realme X7 Pro 5G captures usable selfies indoors but if you're shooting outdoors at night, you'll need the screen flash.

Overall, the cameras on the Realme X7 Pro 5G do a decent job if you're shooting during the day, but struggle to deliver satisfactory results in low light.

The Realme X7 Pro 5G checks many of the boxes for a solid mid-range “flagship killer”, and in many ways, feels like a worthy successor to the Realme X2 Pro (Review). It offers a vivid display, smooth performance, great battery life, very fast charging, and decent cameras for daylight shooting. The addition of stereo speakers and support for 5G makes it a good potential alternative to the OnePlus Nord, even though the storage is limited to just 128GB.

However, I think Realme could have done a lot more to make this a memorable smartphone and really set it apart from its mainstream number series. The design, for instance, is similar to that of the company's 7 series, and many of the X7 Pro's features are also available in Realme's more affordable models. The cameras aren't very impressive in low light either; an area in which Oppo's Reno 5 Pro 5G pulls ahead. And then there's the software, which is still Android 10 when most other manufacturers are launching phones based on Android 11.

The Realme X7 Pro 5G offers good value at Rs. 29,999, but compared to the OnePlus Nord and Oppo Reno 5 Pro 5G, it simply isn't as exciting as it should be.

Google Search Getting Redesign for Music-Related Queries on Desktop: Report
Nokia 3.4 Launching in India Soon, Tipped to Debut Alongside Nokia 5.4 on February 10