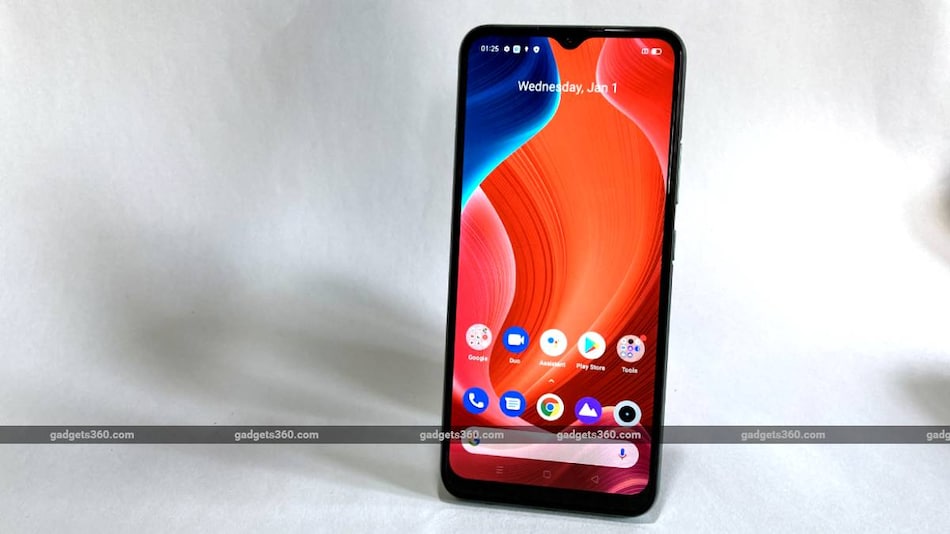 Realme already has a fairly confusing lineup with multiple models in the budget space that have very little differentiating them, and overlapping prices for different variants. The new Realme C11 has just been added to that mix, as the company's latest entry-level model, slotting in at a lower price than the Realme C3 and Realme Narzo 10A. As expected, this model is very similar to its siblings, but of course a few changes have been made to bring the price down to Rs. 7,499. We've been able to spend a little time with the Realme C11 prior to its official unveiling, and we can tell you what exactly is new.

For starters, the Realme C11 is built using roughly the same body that we've seen on many previous models including the Realme C3 (Review) and Narzo 10A (Review). It's only 1mm wider and a hair thicker than either of those models. We also have the same 6.5-inch HD+ 720x1600-pixel screen size and resolution, with the same small waterdrop notch. In terms of handling and general usage, the Realme C11 feels very familiar.

Things are different, visually, on the back. For the first time in a very long time, Realme has changed up the shape of its camera module. We now have a square bump in the upper left corner of the rear, much like current-gen iPhones and the Google Pixel 4. This rather large bump has only two cameras plus a flash, so it's largely there for cosmetic reasons.

An off-centre vertical stripe runs down the back of the phone in line with the camera module and there's a large Realme logo lower down. The stripe isn't a different colour; it stands out because the rest of the back has a very subtle texture of swirly lines. This feels just a little rough, but makes for a very good surface to grip. You have a choice between Rich Green and Rich Grey, and both are relatively muted, which we like.

We noticed that the volume buttons are on the right, above the power button, as opposed to the left like on most recent budget Realme phones. There's a Micro-USB port and 3.5mm audio socket on the bottom, along with a single speaker. We're happy to see individual slots for two Nano-SIMs as well as a microSD card. Our unit had a screen protector stuck on it, and a plastic case is not included in the box.

There's a new design for the camera bump, and a subtle texture across most of the rear

Much like with the Realme C3 before it, the company has decided to forego a fingerprint sensor. This is something we don't like about Realme's low-cost phones and it's still baffling, since the Narzo 10A has one and costs very little more than the C3. We hope that face recognition works well, and we'll make sure to test that in our full review.

The biggest difference between this phone and its siblings is that Realme has used a lower-end MediaTek Helio G35 processor to keep costs down. There's only one configuration, with 2GB of RAM and 32GB of storage, though we wouldn't be surprised to see additional options launch later. The 5000mAh battery should be a selling point for Realme at this price level, and you get a rather bulky 10W charger in the box.

We have a 13-megapixel f/2.2 primary rear camera with a 2-megapixel depth sensor. Realme advertises a Super Nightscape mode which we hope works well. For selfies, you get a 5-megapixel f/2.4 camera. We'll put the Realme C11's cameras through a number of tests in all kinds of situations as part of our review process, and we'll see what this low-cost phone can deliver.

Our sample unit was running Android 10 with the May 2020 security patch when we first took it out of its box. Realme UI is pretty much exactly what we've seen on other devices including the C3 and Narzo series. The UI did feel a little sluggish, and we noticed a bit of lag once or twice when doing simple things like unlocking the phone or launching the Settings app. We'll see how this hardware holds up with regular use over the next several days.

Lower prices are always good, especially at a time when we're seeing frequent price hikes to existing models. We're interested in seeing whether Realme has managed to strike a balance between affordability and ease of use. We'll take some time to evaluate the Realme C11's performance, battery life, cameras, software, and much more, so do stay tuned to Gadgets 360 for our full review, coming up soon.